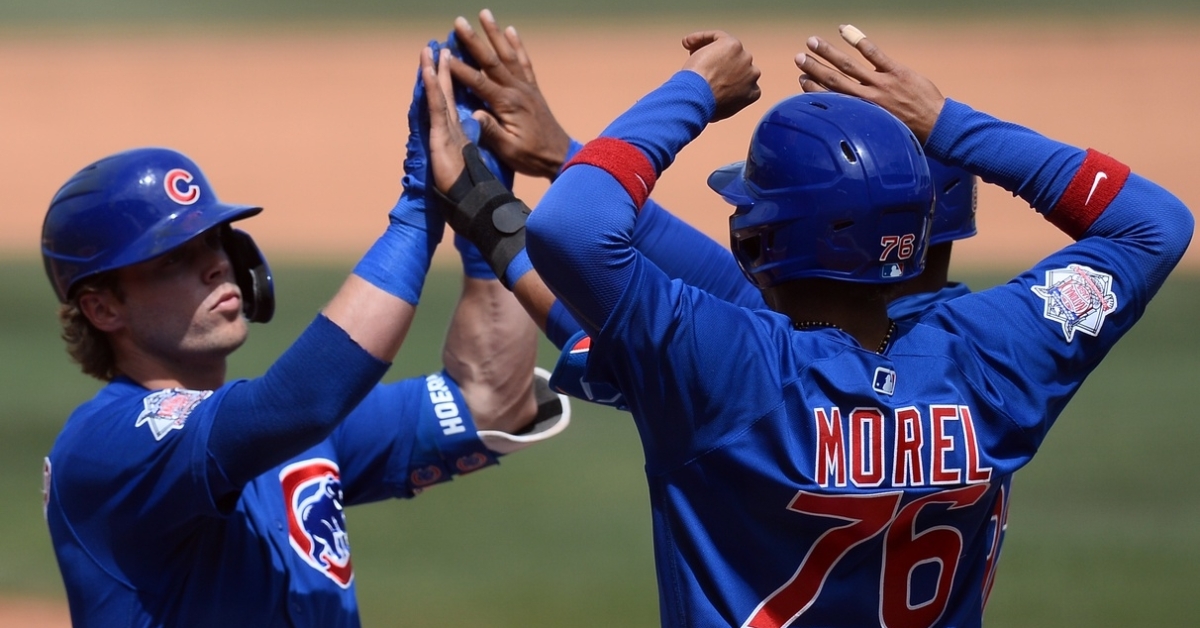 Thursday was a busier night on the diamond as both DSL Rookie League teams joined Iowa, giving the Cubs three games on the docket. With no major league baseball in the Cubs organization Thursday, it was a good time for fans to check in with some of the top prospects, including Brennen Davis for AAA Iowa.

Overall, the Cubs put together a great night on the diamond posting a 2-1 record on the day. Both of those wins came in Rookie League ball as both DSL Cubs teams came away with a win. That is a rare occasion as the Cubs haven't been able to say that too much this season.

The Saints evened their series up with Iowa on Thursday night, using the middle innings to come from behind and win 7-5. Matt Swarmer has seen his season turnaround since moving to the rotation in August. However, Thursday was not a good outing for him as he went 5 1/3 innings and allowed six runs in the process. He gave way to Juan Gamez and Brendon Little, who combined to allow just one run in 3 2/3 innings. Little struck out four in his outing and lowered his AAA ERA to 2.93.

The Cubs wasted no time getting the offense going as they scored early and often to open the game. Jared Young connected for an RBI double in the first to give Iowa the 1-0 lead before the Levi Jordan single in the second doubled the lead to 2-0.

First Triple-A hit is in the books for Christopher Morel! pic.twitter.com/s7IBIXbPCJ

Moving to the third, and the Iowa offense continued to keep the pressure on with Christopher Morel picking up his first AAA RBI with a single ahead of the Andrew Romine bunt single, and just like that, Iowa built a 4-0 lead with things looking good.

With the Cubs leading 4-0 in the bottom of the third, the Saints got on the board with BJ Boyd connecting for his first homer of the season to make things 4-1. That homer was followed by the Ben Rortvedt two-run shot in the fifth, and just like that, we had a 4-3 game. That is when the game tilted in the Saints favor as they backed that two-run inning up with a three-run sixth to take the lead for good.

The first of those runs came off the Tomas Telis RBI single to tie things up 4-4 before Mark Contreras unloaded for his 17th homer of the season to make things 6-4 at that point. Ellis continued to see the ball well as he cashed in with a seventh-inning RBI single to extend the lead to 7-4. That would be all the Saints would need as Abiatal Avelino added an eighth-inning RBI groundout to pull within 7-5 before falling by that score.

The Cubs had plenty of contributions in their lineup, with Young, Morel, and Romine having multi-hit efforts to lead the way. Not only was it Morel's first hit, but he collected his first AAA RBI in the process. Jordan, Johneshwy Fargas, and Ian Miller had the rest of the hits as Davis saw his AAA hitting streak come to an end.

Despite allowing a big inning to put the Cubs in an early hole, the Cubs responded with a pair of five-run innings of their own to cruise to an easy 11-5 win. Despite the rough outing from Starlyn Pichardo, who surrendered five runs in 1/3 of an inning, the rest of the Cubs pitching was brilliant, with Joel Jimenez and Jose M. Lopez dealing five scoreless innings to close out the game.

Things didn't get off to a good start for Pichardo or the Cubs as the Mets offense jumped on them early and often. Fabian Machado opened the scoring with an RBI double to put the Mets up 1-0 before Gerald Mejia delivered the big blow with a three-run shot to make things 4-0. Mike Ibarguen added an RBI double later in the inning to put the Mets up 5-0, but it was all Cubs from there as they ended the game with 11 unanswered runs.

It took four innings for the Cubs offense to get going, but they couldn't be stopped once they did. An Elias Fabian single put the Cubs on the board as an error on the same play allowed for a second run to score. An RBI fielder's choice from Brayan Altuve made things 5-3 before the Starlin Mateo sacrifice fly closed the gap to 5-4. Geuri Lubo added another RBI fielder's choice later in the inning as the Cubs clawed back to make things 5-5.

As if one five-run inning wasn't good enough, why not run it back as the Cubs used a second consecutive five-run frame to bust the game wide open. Altuve found himself right in the middle as his RBI double brought home the winning run to make things 6-5. Andrews Cruz added a two-run double of his own with Anderson Suriel and Pedro Ramirez connecting for RBI singles to give the Cubs a 10-5 lead.

Raino Coran capped off the scoring with a sixth-inning RBI single as the Cubs came from behind to win, going away 11-5. The Cubs managed 11 hits in the win, with Ramirez, Moises Ballesteros, and Cruz all with two. Cruz and Altuve had two RBIs to lead the team in what was an impressive win.

The offense was clearly the Cubs story down in the DSL, as they clubbed 22 total runs across the two games, with DSL Blue winning their game 11-2. The Cubs used four pitchers in the game, all of who went at least two innings as they combined to allow two runs on seven hits to go with nine punchouts in the win.

From an offensive side of things, the Cubs got off to a slow start being held scoreless through three and trailing 1-0 after the Robert Lopez RBI double in the third. In the fourth, the Cubs busted things wide open using a five-run frame to seize control. Wally Soto put the Cubs on the board with an RBI single, but it was the Jerry Torres RBI double that proved to be the winning hit, with the Cubs now leading 3-1. Daniel Ferreira and Lizardo Ruiz collected RBI singles later in the inning as the Cubs led 5-1 at this point.

Looking to keep things close in the fifth, it was Kevin Rivas cashing in with another RBI double, making things 5-2. That would be all the offense for the Indians as the Cubs scored six more times. Three of those runs came in the sixth, with Wilmer Bolivar delivering a two-run single mixed with a wild pitch to push the lead to 8-2. One inning later saw Torres pick up his second RBI hit of the game as his single made things 9-2.

DSL Blue brought home two more runs in the ninth inning as they made quick work of the Indians with a score of 11-2. Torres was one of three players with two hits joining Bolivar, and Soto. Torres also led the way with three RBIs, as Bolivar added two. Ruiz and Ferreira added the final two hits, with Cristian Hernandez getting the day off.