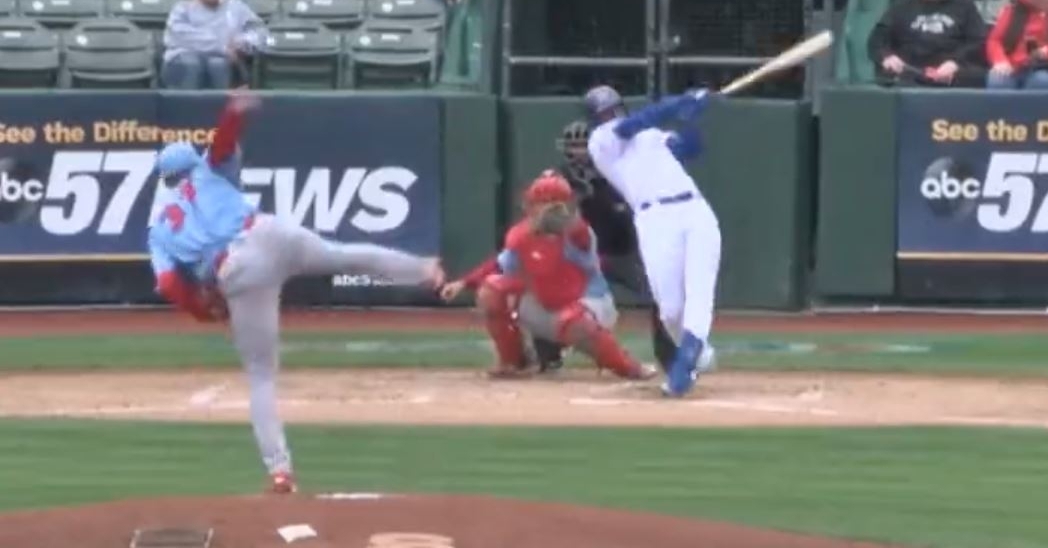 Someone should let the Chicago Cubs know that winning is contagious. They may not have gotten that memo recently, but the kids down on the farm certainly did, as winning games has not been an issue.

24 hours after posting a 3-1 record on the farm, the Cubs farm system was at it again, ripping off three more wins, with Iowa taking the lone loss. When you look at how things are going on the Northside, minor league viewership may start trending upwards as some exciting baseball is being played.

Things were not fun for Iowa on Wednesday, as they dug themselves a 5-0 hole after just two innings while the offense was non-existent. Mark Leiter Jr made his return to Iowa, and despite striking out seven in 3 2/3 innings of work, he was charged with five earned runs.

All five of those runs came in the first two innings, and all came via the home run. Mark Contreras got the party started with a three-run shot, with Elliott Soto adding a two-run shot in the second to make things 5-0. Home runs played a vital role in the third inning, with Jared Young getting in on the fun for his sixth season to cut the deficit to 5-1.

Your @EMCInsurance Player of the Game is Jared Young with this solo blast! (yes, @voiceofcohen called it) pic.twitter.com/5gooUejlE1

For the Cubs, that would be all the offense on the evening as the Saints added two more runs off a Curtis Terry double and then another one off the Alex Kirlloff single to even the series up with an 8-1 win. Not only did Young provide all the offense, but his two hits matched Erick Castillo to lead the way.

While the Cubs major league team may not be able to beat the White Sox, their AA indeed can as the Smokies rolled 10-4. 2019 first-round pick Ryan Jensen battled through some command issues, but after allowing just two runs in four innings, it may have been his best start.

He gave way to Blake Whitney, who earned the win in relief before Burl Carraway and Kyle Jonhson followed. Carraway allowed the other two runs as his time in AA has been anything but smooth sailing.

While Jensen may have allowed a pair of RBI singles in the first two innings, Chase Strumpf kept things close by belting his fifth homer in the second season. Nelson Velazquez added to his organization high in homers by belting his ninth of the season before the Smokies offense awakened in the fourth.

With plenty of traffic on the bases, Levi Jordan gave the Smokies the lead for good with an RBI single before Luis Vazquez extended that lead to 5-2 with an RBI knock. Still holding that lead in the seventh, Christopher Morel added an RBI triple to make things 6-2, but the Craig Dedelow home in the bottom half pulled the Barons within 6-4.

Looking to add on in the ninth, the Smokies pushed across four runs as Bryce Ball, Andy Weber, and Harrison Wenson collected RBI hits to bust things open which led to the win. The Smokies pounded out 15 hits, with Strumpf leading the way with three. Velazquez, Morel, Weber, and Jordan added multi-hit games as everyone in the lineup had one hit.

Eight different Smokies had an RBI this afternoon in our win at Birmingham. pic.twitter.com/UeDmhVZHuk

Despite coming into this series as one of the hotter teams in the Midwest League, Peoria has found it challenging to top South Bend thus far. That was once again the case Wednesday as a three-run eighth inning propelled the Cubs to the 6-3 win.

Kohl Franklin got the nod and lasted only two innings as he continued to build up his arm. Joe Nahas took over for him and gave the Cubs six innings of one-run ball to secure the win before handing it off to Jeremiah Estrada to close things out.

Both of the runs charged to Franklin on the afternoon came in the second inning as the RBI single from Aaron Antonini gave the Chiefs the lead before a sacrifice fly made things 2-0. While Velazquez may lead the organization in homers, Alexander Canario may be the hottest hitter on the planet. He connected for a solo shot in the second for his seventh homer. This also marked the fourth straight game Canario has hit a homer as he is seeing the ball exceptionally well.

One inning later saw the Cubs grab the lead with Bradlee Beesley leaving the yard for the second time this season and a 3-2 South Bend lead. With Nahas on the mound, Masyn Wynn would tie things up in the fourth as his RBI double brought things to even.

That score would hold until late when the home run ball played another significant role. Speaking of hot hitters, Matt Mervis is starting to find his groove as his fifth homer gave the Cubs a 6-3 lead in the eighth and proved to be the winning hit.

ICYMI... Today we belted 3 @hoosierlottery homers, including a game-winning 3-run homer from Matt Mervis in the 8th. pic.twitter.com/9qssYZ5QZp

Despite recording just six hits, the Cubs made them count as all six runs came via the homer.

Justin Fields completed 18-31 passes for 214 yards as the Bears topped the Patriots 24-6. I'm sorry, this isn't football season, but you would never have guessed by looking at this score.

Coming off a rare loss on Tuesday, the Pelicans were clearly mad on Wednesday as they erupted for the most runs scored in a game this season and the most for them in 17 years. Luke Little may have lasted just 2 1/3 innings, but he continues to get better with each outing. He gave way to a trio of pitchers as neither had to worry about a thing.

Not only did they score 24 runs, but 20 of them came in the first five innings as Salem was left searching for answers. It didn't take long for the party to start as Ethan Hearn put the Pelicans up for good 1-0 before three more runs came home in the first.

Hearn added a second RBI in the second, but the Yeison Santana double extended the lead to 7-0 after two innings of play. Things only got worse for Salem from there, with Peter Matt connecting for his first homer in the third and then adding a second homer in the fourth as the Pelicans led 14-2.

Peter Matt hits a two-run homer for his first of the season.

Pelicans 9, Red Sox 1 in the bottom of the third. pic.twitter.com/izTLphNfm4

Their big inning came in the fifth when six more runs came across to score, with the Pelicans leading 20-3 by the time the inning ended. BJ Murray Jr picked up a double in that inning, with Reggie Preciado adding an RBI groundout. Matt continued his excellent night with another RBI hit, but the Pete Crow Armstrong bomb capped off that inning as the Pelicans were having too much fun.

The Birds can’t be any hotter.

Pete Crow-Armstrong joins the party with his fourth home run of the season.

Pelicans up 20-3 in the bottom of the fifth. Most runs in a game since 2014, and there’s still four more innings left. pic.twitter.com/b1ztvWLNux

The Pelicans scored four more runs in the eighth inning as they took care of the Red Sox 24-6. With 24 hits, there was plenty to go around, with Cole Roederer and Preciado leading the way with four. Preciado also added a career-high six RBIs as he needed this game for a confidence booster.

Murray Jr, Crow Armstrong, and Matt collected three hits while everyone, but Kevin Alcantara had a hit. Matt had the biggest day of everyone as he led the offense with seven RBIs.

His second homer of the night is a three-run blast to make it 14-2 Birds in the top of the fourth. pic.twitter.com/eNURUYo2U7