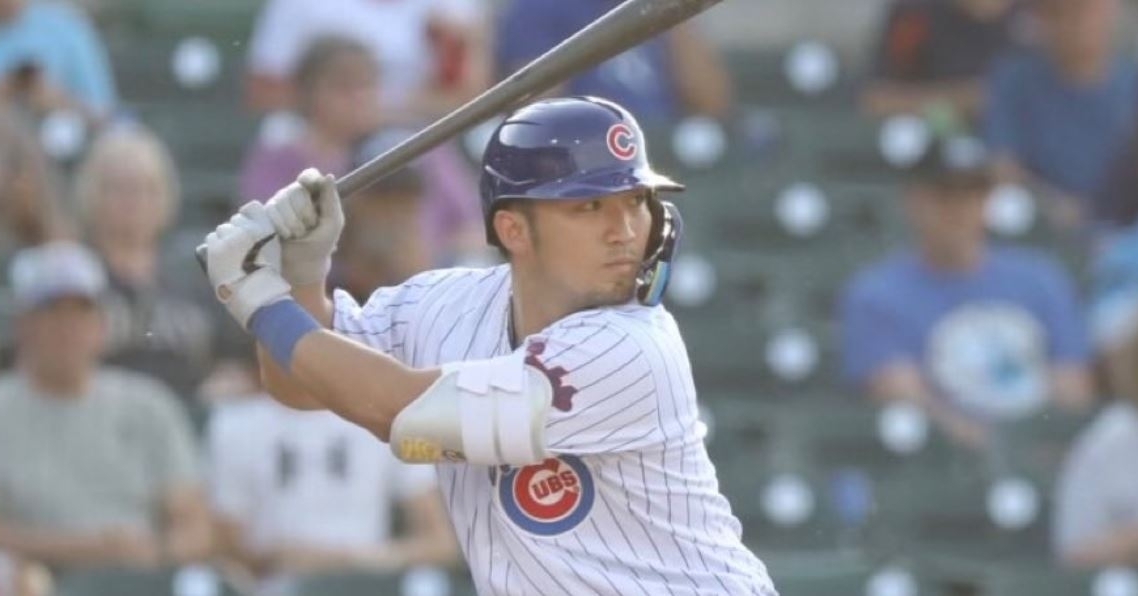 Suzuki was impressive in his rehab start (Photo via Iowa Cubs)

Had it not been for the Rookie League teams posting an 0-3 mark on the night, things would have been looking much better. With the Full season teams holding their own and going 3-1 on the night, finishing with a 3-4 record is disappointing.

Pitching was once again the topic of choice, at least in the full-season leagues, as several strong showings happened again. If the Cubs are going to get back to World Series contenders, they will need to develop some homegrown pitching that seems to be on its way.

Despite scoring five runs in the first inning, Iowa only managed to pick up one run the rest of the way. Add that to Columbus scoring 10 times in the final three innings, and you get a loss as you had on Thursday.

Across his four innings, Luke Farrell did his job as he allowed just two earned runs. That was good enough early on until Wyatt Short allowed six runs to signal the beginning of the end. Farrell didn't get off to the best start allowing an RBI double to Will Brennan in the first, along with an RBI ground out. Those were the only runs he allowed as he looked good the rest of the game.

For Iowa, it was about their offense in the early going as they came out on fire. Seiya Suzuki, who picked up an RBI single to put the Cubs on the board, wasted little time getting reacclimated to professional pitching. Nelson Maldonado tied things up with an RBI single before a single from Erick Castillo gave the Cubs a 4-2 lead. Dixon Machado also added a bases-loaded walk to make things 5-2 after one.

Suzuki seems more than ready to return to the majors as he added a home run in the fourth to put the Cubs in front 6-1.

BOOM! Seiya Suzuki with a solo home run in his third at-bat as an I-Cub. pic.twitter.com/VZ8pXqn3Fr

Unfortunately, that would be it for the offense, but it appeared to be enough for a while. That was until the seventh inning, when Columbus ended the game with 10 unanswered runs, including a Nolan James grand slam to tie things up in the seventh as Columbus won 12-6. Suzuki and Castillo had two hits with two RBIs.

Pitching has been the name of the game since this series began, and that continued with another strong showing Thursday. Riley Thompson limped through two innings of work in another start, but the five shutout innings from Dalton Stambaugh gave the Smokies the win.

Trailing 1-0 in the second after the Jordyn Adams single, Harrison Wenson wasted little time tying things up as his homer made things 1-1.

Harrison Wenson with a solo shot to tie the game! 1-1 in the bottom of the second. @harrison_wenson pic.twitter.com/st7mpYINCp

That score held until the fifth, when Luis Vasquez and Yonathan Perlaza delivered solo shots to make things 3-1.

Luis Vazquez for the lead!!!! Smokies up 2-1 in the bottom of the fifth. @luisito_vaz pic.twitter.com/DhxaprrQLf

BACK-TO-BACK!!!! Perlaza with a solo bomb to extend the Smokies lead! 3-1 Smokies in the bottom of the fifth. pic.twitter.com/OXJUyBUiW6

Perlaza was credited with the game-winning hit before adding an RBI double later in the game as the Smokies doubled up the Trash Pandas 4-2.

Yet another RBI for Perlaza tonight!!!! Smokies increase their lead 4-1 in the bottom of the 7th. pic.twitter.com/F0xX5r7y5w

We don't stay down for long. See you tomorrow for the start of our Independence Day Weekend Extravaganza! pic.twitter.com/PlPp5NThCx

Make that three for three for the Cubs this week as their pitching shutdown Beloit for a third time this series. Kohl Franklin gave the Cubs his best outing of the season and came one inning short of earning the win. He finished with four innings, allowing two runs with only one earned. While he is still searching for his first win, Michael McAvene earned the win in relief to give himself his first win in nearly three years.

Despite the Cubs striking first on the Yohendrick Pinango single, Beloit answered in the bottom of the first with Jose Salas tying things up with a homer before an error made things 2-1. The Cubs took the lead for good in the third as Scott McKeon tied things up with a single before a double steal made things 3-2. Owen Caissie added a bases-loaded walk in that frame to make things 4-2.

Looking to keep things close, Ynmanol Marinez pulled the Sky Carp within 4-3, using an RBI groundout to do so. Luis Verdugo would add an RBI double later in the game as the Cubs won 5-3. Verdugo led the way with three hits as Pete Crow-Armstrong joined him.

8 WINS IN A ROW! pic.twitter.com/e5wDAyaixG

The Pelicans appear to be back on track as they took care of the Riverdogs on Thursday. Tyler Schlaffer has gotten into a nice groove across his last five starts and gave the Pelicans six shutout innings with seven K's in this one.

It was a pitcher's duel in the early going, with the Felix Stevens RBI single the lone run through four. That was until the three-run shot by Josue Huma put the Pelicans in front 4-0 in the fifth.

Ohhh yeah, he got all of that one.

That would be as close as things would get with Ezequiel Pagan making things 5-3 in the seventh before adding three more runs in the eighth.

Stevens led the team with two hits as Ethan Hearn joined him.

The ACL Cubs can't buy a win right now as their offense showed up, but not the pitching. The Royals opened things up with a 4-0 lead after two innings before the Cubs bats started to come to life.

Ismael Mena put the Cubs on the board with an RBI groundout in the fourth before they started to make things happen in the sixth. Not only did a bases-loaded hit by pitch make things 4-2, but Miguel Pabon picked up an RBI single before the Cristian Hernandez double play tied things up 4-4.

The Royals retook the lead in the bottom of the sixth when Jaswel De Los Santos picked up an RBI single, with Cam Williams adding an RBI double. Not about to go down quietly, the Cubs were gifted by a pair of wild pitches, including one in the ninth, to tie things up 6-6. Their luck would run out as Diego Guzman walked the Cubs off with a single in the 10th.

Although the final line doesn't look great, it is a bit deceiving as 10 Pirates runs came after the fifth inning. Trailing 3-0 in the third after Isaac Paulino and Robert De Paula added RBI doubles, the Pirates busted the game wide open with four runs in the fifth and six more in the seventh. The lone Cubs run came from the Jose Escobar groundout in the fifth as they fell 13-1.

Not only was the DSL Blue showing a rough one, but DSL Red was not much better. Unlike the Pirates, who scored most of their runs eight, the Braves provided most of their offense early, with seven runs coming home over the first two innings.

Five of those runs came in the first inning, and things only got worse from there. After Daniel Benschop made things 7-1 with a sacrifice fly in the fourth, the Braves extended the lead to 9-1 by the end of the fifth. Carlos Ramos added an RBI single for the Cubs in the sixth, but that would be it in the 10-2 loss.