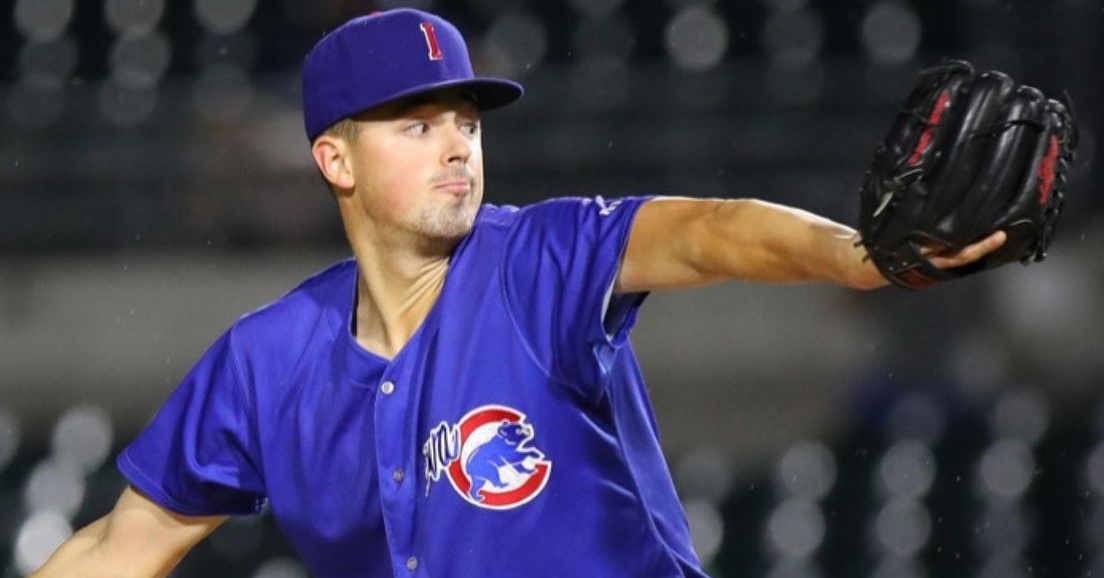 It may not have been another perfect night down on the farm, but at least the Cubs are seeing their organization win a lot more games after a tough start to the week. Friday gave fans plenty of action to follow as the team went 3-3 on the day with one game getting suspended.

This wasn't a day filled with shutout wins, but instead, the Cubs treated their fans to several walk-off wins and just a barrage of exciting play. With the MLB draft officially over, start looking for some more roster turnover in the coming days as more players will begin arriving in the system.

The Mud Hens were able to bounce back from their loss on Thursday, using some late-game offense off the Cubs pen to win 5-3. Matt Swarmer seems to have figured things out after a rough go of it early on in AAA. He not only went 5 2/3 innings, but did so, allowing two runs with none of those runs earned.

He was backed by some early offense by the Cubs, with Ian Miller staying red hot, picking up an RBI single in the second to give the Cubs a 1-0 lead. Two innings later saw Iowa with another great opportunity as Andrew Romine earned the bases-loaded walk to make things 2-0. That was the turning point in the game as the Cubs were unable to push across any more runs.

Defensively, the Cubs did Swarmer no favors as they committed three errors in the field. One of those errors came back to bite them in the sixth as a Victor Reyes triple not only tied the game 2-2 but chased Swarmer with both of those runs coming via the unearned fashion. Michael Hermosillo made sure to do his part next inning using a solo shot to put the Cubs back in front, but Toledo got the last laugh.

After seeing Tony Cingrani take care of business in the seventh, the Cubs turned to Dakota Mekkes in the eighth, and his outing didn't go as planned. Not only did he allow a Reyes double that put the Mud Hens in front for good, Cody Clemens picked up a sacrifice fly to put the game away with Iowa falling 5-3. Both Nick Martini and Tyler Ladendorf had multi-hit efforts for the Cubs, who picked up eight hits in the loss.

Unable to build off a strong Thursday performance, the Smokies dropped another game to the Braves 6-4. Cam Sanders found himself on the losing end of things despite tossing 5 1/3 inning of fairly good ball. He may have been charged with three runs, but he struck out six and looks to be pitching much better.

Sanders was strong early, however, and held the Braves scoreless through the game's first four innings. That allowed the Tennessee offense to give him some early support, with Tim Susnara connecting for a two-run shot in the third for a 2-0 lead. In the fifth, the Braves turned to play long ball as CJ Alexander and Greyson Jenista took Sanders deep, tying things up 2-2. One inning later saw them grab the lead for good on a wild pitch before building on that lead in the seventh.

With Hendrik Clementina connecting for the Braves third homer, Mississippi was up 4-2. They added two more runs in the seventh off a costly error and now held a 6-2 late. The Smokies did their best to try and mount a comeback, with Darius Hill connecting for a solo shot in the eighth and then picking up an RBI single in the ninth. Unfortunately, that was all they could do, falling 6-4.

Hill may not have started, but he came off the bench in a big way going 2-2 with two late RBIs. He was the only player to record hits, with everyone except Brennen Davis and Nelson Maldonado grabbing a hit in the loss.

Off the field, it was a magical evening. On the field, it did not go in our favor. #SmokiesBaseball #GoSmokies pic.twitter.com/KXsGrDdw5K

Talk about a team with a flair for the dramatics. That would be the South Bend Cubs as they not only picked up their third straight win, but third straight walk-off win against the Kernels. Matteo Bocchi got the start and continues to go about his business allowing just one run in four innings while striking out eight. His ERA is now 3.55 for the season as he continues to pitch well.

The lone run Bocchi allowed came in his final inning of work when Jair Camargo singled home the game's first run for the 1-0 lead. With Blake Whitney now in relief, the Cubs offense came to life as Bocchi deserved better than losing decision. D.J. Artis wasted no time using one swing to give the Cubs a 3-1 lead as he connected for his first homer of the season.

However, the bullpen duo of Graham Lawson and Burl Carraway had a night to forget as they combined to allow four runs in two innings, with the first two coming off a Max Smith double and Daniel Ozoria ground out in the seventh to tie things up 3-3. South Bend responded in the bottom of the seventh with Tyler Durna picking up an RBI groundout ahead of the Nelson Velazquez double, and just like that, it was a 5-3 game.

Hoping to keep things that way, Cedar Rapids was able to tie things back up in the ninth, with Edouard Julien taking Carraway deep to make things 5-5. After failing to end the game in the bottom of the ninth, the two sides went to the 10th, where once again, it was the Cubs coming through when it mattered. It was Josue Huma on Thursday and Ryan Reynolds on Friday as his single lifted the Cubs to a 6-5 walk-off win.

Durna continues to have a huge series, leading the offense with three hits to go with his RBI. Artis is hoping his two-hit, three-RBI game is a sign of things to come as he is still just hitting a 157 for the season.

In what was an identical score to that of South Bend, the Pelicans secured another win over Columbia, with this one being via the walk-off. Didier Vargas earned another start and labored through five innings in which he was charged with five runs. Fortunately for him, the duo of Carlos Ocampo and Bailey Reid out of the pen mixed with a hot offense was able to bail him out.

The Fireflies had Vargas' number early on, with Juan Carlos Negret giving them a 1-0 lead in the first before the Matthew Schmidt double in the second had them up 3-0. Ethan Hearn took it upon himself in the bottom of the second to help out his battery mate, going deep for the second time to tie things up 3-3. Vargas continued to struggle in the fourth, with Burle Dixon picking up a go-ahead RBI double before a wild pitch made things 5-3.

Fortunately for the Pelicans, that would be all the offense the Fireflies would get as the offense had a chance to bail out Vargas. A Luis Verdugo double closed the deficit to 5-4 before Jacob Wetzel singled in the fifth to tie the game up once again. That 5-5 score would hold until the 10th inning as the Pelicans bullpen did their job keeping Columbia off the board.

Looking to cash in during the 10th inning, manager Buddy Bailey chose to play small ball, which worked in their favor. Jordan Nwogu dropped down a bunt single to push home the winning run as the Pelicans took game four 6-5.

He can do it all!

Jordan Nwogu gets the bunt down and the Birds walk off with the win.

Crack of the Bat Play of the Game | @VinesPlumbingSC pic.twitter.com/9MIY8hB6AY

The Pelicans collected eight hits in the win, but it was Wetzel leading the way with two. Ezequiel Pagan and Jonathan Sierra were the two players without hits.

WALK OFF BUNTS FOR THE WIN!!

Runs were hard to come by for DSL Cubs Blue as they fell to the Rays 4-1. The Cubs found themselves in an early hole, as pitching did them no favors in the first, with Santiago Millan and Arison Jimenez earning bases-loaded walks for the 2-0 lead. That lead was extended to

3-0 in the second after Angel Galarraga went deep for the first time this season.

The Rays continued to keep the pressure on the Cubs offense, with Luis Feliz picking up an RBI single in the fourth to push the Cubs deficit to 4-0. An Ezequiel Alvarez groundout in the top of the fifth got the Cubs on the board, but there were not able to push across any more runs, falling 4-1.

The offense was hard to come by with just four hits, but Carlos Ramos had a pair of those hits. Christian Hernandez and Luis Espinoza joined him as they had the final two hits for a quiet offensive day.

Looking to keep the Phillies squad winless, the Cubs used a big six-run inning to do most of their damage before holding off a late Phillies rally for the win. Joel Jimenez started and went four innings, allowing a pair of unearned runs on four hits. Those runs came in the fourth when the Phillies not only scored their first run on a dropped third strike, but got their second on a steal of home.

Frustrated by how things transpired in that inning, the Cubs offense used that to fuel their fire as they busted out for six runs in the fifth to take the lead for good. A Cristian More RBI force out had the Cubs on the board before singles from Pedro Ramirez and Brayan Altuve had the Cubs in front 4-2. Moises Ballesteros and Anderson Suriel continued to build on that lead with RBI doubles giving the Cubs a 6-2 advantage after five.

Looking to make things interesting in their own right, the Phillies used a big sixth inning of their own to close the gap to 6-5. Jackie Pertuz got things rolling with an RBI double before the Agony Mejia sacrifice had things 6-4. Add in a bases-loaded walk to Leonardo Rondon, and the Phillies were within 6-5. Fortunately for the Cubs, they avoided the loss using another Ramirez RBI hit in the sixth to give them the insurance they needed to secure the 7-5 win.