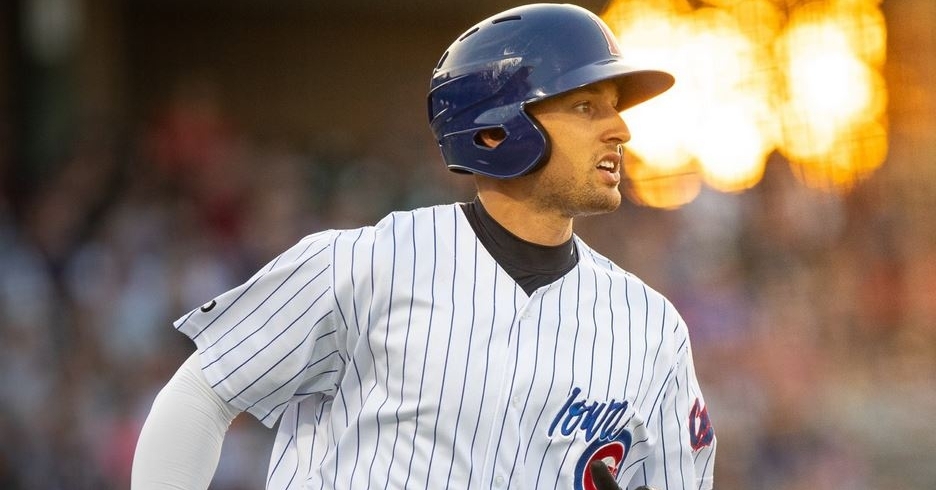 Thompson had an impressive game on Sunday (Photo via Iowa Cubs)

The end of another week of competition didn't go as planned for the Cubs, as wins were hard to come by in the system. Not only did the organization suffer an 0-3 night on the diamond, but the only team that technically walked away with a win had their game suspended after just two innings, therefore, wiping their game away.

If there were any positives to take away from last night, it would be that most of the games were competitive, which at the very least was a moral victory for fans. I also want to encourage fans to pay very close attention to the farm system over the next few days as plenty of new faces may be heading to the organization.

One day after picking up a nice win in extras, it was Iowa on the short end of the stick as the Clippers topped the Cubs 6-5. Mike Hauschild wasn't at his best, allowing four runs in just four innings, but most of that damage came in the first. In that inning, he had to pitch around traffic before Nolan Jones made him pay with a three-run shot to put the Cubs in an early 3-0 hole.

Iowa did their best to make a comeback in the third with an Ian Miller double, but Columbus responded in the bottom of the fourth, going up 4-1 off an error. With Michael Rucker now on in relief, Iowa started to find their offensive rhythm as they climbed all the way back to take the lead. That comeback effort began in the sixth when Trayce Thompson belted his team-leading 11th homer before a Miller single, and Abiatal Avelino sacrifice fly had things tied up 4-4 in the sixth.

One inning later saw Nick Martini get into one as his seventh homer of the season put the Cubs in front 5-4. Looking to hold on to that lead, the Cubs turned to Dakota Mekkes in the seventh, and his outing didn't go as planned. Not only did he allow the go-ahead Oscar Gonzalez single, but that proved to be the difference as the Cubs fell 6-5.

Everyone in the Cubs lineup recorded at least one hit, but Thompson and Miller led the way with two. Sergio Alcantara picked up another hit and has hit safely in all four games since returning to Iowa and is hitting .333 for the season.

Final from Columbus. We'll see you back at Principal Park on Tuesday! pic.twitter.com/kc3mg1RW7D

After a promising start to begin the game, the Smokies saw their contest with Rocket City suspended in the second. Javier Assad was on the mound for Tennessee and, despite walking a pair of first-inning hitters, managed to keep the Trash Pandas off the board for the time being. Has backed by Christopher Morel's 13th homer of the season as Tennessee held the 1-0 lead before the stoppage in play. The game will continue as part of a doubleheader on August 31.

Tonight's game against @smokiesbaseball has been officially suspended due to rain.

It will be made up as part of a single-admission doubleheader on Tuesday, August 31st.

Hits were hard to come by for both teams, but it was South Bend who struggled the most as they accumulated just three hits in a shutout loss. 2019 fourth-round pick Chris Clarke made just his second appearance this season and made his South Bend debut, and delivered a strong start. Clarke allowed just one run on four hits to go with three punchouts in four innings, as he did more than enough to keep his team in it.

Joe Nahas and Burl Carraway were charged with the other two runs as the South Bend pen continues to be an issue. The lone run Clarke allowed came off a wild pitch in the first, but that was all Wisconsin would need. They then would add a Kekai Rios homer off Nahas in the fifth and Yeison Coca single off Carraway in the seventh to pick up the 3-0 win.

With just three hits, the Cubs ended their series with Wisconsin on a sour note as Delvin Zinn, Jake Slaughter, and Jake Washer recorded the hits. Nelson Velazquez and Bryce Ball went hitless as Ball continues to struggle since being traded to the Cubs system.

Sometimes you eat the bear and sometimes the bear eats you. pic.twitter.com/5uYjxh1sAS

Even though the Pelicans went down in shutout fashion on Sunday, you have to give them a ton of credit for how they played over the week against one of the best in the game. Much like South Bend, hits were hard to come by, which was a problem for Richard Gallardo.

The right-handed starter got through five innings once again for the Pelicans, but allowed five runs in the process. To his credit, only two of those runs were earned as the defense did him no favors. A large chunk of the damage off Gallardo came in the third inning when Charleston pushed across four runs. A throwing error not only led to the first run, but opened the flood gates as a Brett Wisley sacrifice fly and Diego Infante homer had Myrtle Beach down 4-0.

Only one run was earned of those four runs, but that proved to be way too much for Myrtle Beach. In the fifth, a Jonathan Embry homer was the second and final earned run charged to Gallardo as Charleston build their lead to 5-0. The Riverdogs added a pair of eighth-inning runs off a bases-loaded hit by pitch to Garrett Hiott before the Michael Berglund sacrifice gave Charleston a 7-0 win.

When an offense picks up just five hits, runs will be hard to come by, as Ezequiel Pagan led the way with two hits. Ed Howard, Yohendrick Pinango, and Kevin Made tallied the remaining three hits, with Jordan Nwogu and Ethan Hearn going hitless.