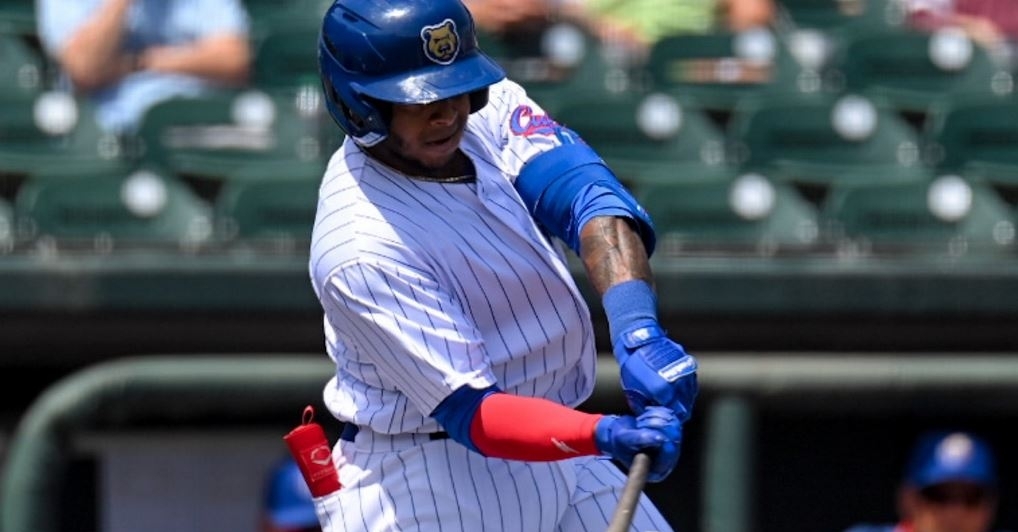 The recent slide for the Cubs continues as they dropped their series opener with Toledo. Remember when the Cubs had the second-best ERA in AAA? After their rough showing against Saint Paul and now this, Iowa has seen their ERA go from NO.2 down to No.7.

The Cubs didn't make it easy on themselves as Robert Gsellmen made the start and allowed six runs in the first inning. Take that away, and the Iowa pitching was good, allowing just three runs the rest of the way. Iowa did get off to a great start with Nelson Maldonado giving the CUbs a 1-0 lead with a sacrifice fly before Nelson Velazquez followed that with a homer to make things 2-0.

Once Toledo came to bat in the bottom of the first, it was all downhill as Gsellmen had an inning to forget. With Robbie Grossman leading things off with a homer, the Mud Hens tied things up off a wild pitch and continued to keep the pressure on. A Josh Lester double gave Toledo the lead for good before a pair of RBI singles had things 6-2 after one.

Velazquez did his best to keep things close, adding a second homer later in the game, but it was no use with Toledo scoring three more times off the Cubs pen to cruise to the win.

Velazquez joined Dixon Machado with a two-hit day, but Velazquez delivered two of the RBIs in the loss.

Anchored by their three-run eighth inning, the Smokies managed to pick up a series-opening win over the Brewers AA affiliate. Looking to bounce back from a horrendous start last time out was Chris Clarke, who was much better.

Across his 5 2/3 innings, Clarke allowed two runs on five hits while striking out a AA high eight. He may have gotten a no-decision, but turned things over to Blake Whitney for the win and Baily Horn for the save as the offense backed them up late.

When it comes to Clarke and his outing, he allowed a first-inning RBI single off the bat of Jackson Reetz and a third-inning homer from Noah Campbell as his lone blemishes on the night. Since TJ Shook managed to match Clarke and his success through five innings, there was no surprise that the game was tied 2-2 late.

Matt Mervis tied things up in the fourth off of a homer, but the Luis Vazquez homer in the eighth provided the Smokies with the winning run 3-2. Mervis would add some big-time insurance with an RBI double later in that inning, which led to the 5-2 final score. With his three hits and three RBIs, Mervis is now hitting .328 since his promotion to AA.

A 3-run eighth inning puts the Smokies in front for good in a 5-2 victory in Biloxi. Matt Mervis shines in stellar performance, going 3-4 with 3RBI. Blake Whitney earns the win going 2.1IP with 0 hits and 2 strikeouts. pic.twitter.com/k0yOw9ek4l

If South Bend thought their series with Dayton was tough, facing off with the division-leading Kernels would be even tougher. Cedar Rapids showed why they are a first-place team on Tuesday, making quick work of the Cubs 7-1.

After delivering one of the best outings in the past decade, DJ Herz was tagged with his worst outing of the season, allowing five runs (3ER) in just 2 2/3 innings. Herz did manage to strike out seven, but walked four as the South Bend offense was in for a long night.

As if Herz struggling wasn't bad enough, Sawyer Gipson-Long made things more challenging as he lowered his season ERA to 1.99 following six innings of one-run ball. Most of the damage came in the third inning when Cedar Rapids scored four times and extended the lead to 5-0.

The Cubs lone run came in the fourth off a Pablo Aliendo homer, but that was it in what was a long day.

Alien had one of the four hits for South Bend, with Yeison Santana and Jonathan Sierra (2) adding the rest.

Final from the series opener. pic.twitter.com/8t48mpElC2

Things haven't been easy for the Pelicans in the last 10 games, but they continue to find ways to win. With the first half of their season schedule nearly complete and leading their division, it looks like there will be playoff baseball returning to Myrtle Beach this year.

Continuing the trend of rough outings on the mound, Tyler Schlaffer was coming off his best outing of the season, only to follow that up with six runs allowed across four innings. Had it not been for the bullpen stepping up, especially Adam Laskey and Angel Hernandez, who knows how this game would have turned out.

A large portion of the damage done came after the James Triantos double put the Pelicans up 1-0 in the first. The Mud Cats followed that up by scoring five times in the bottom of the first off of several hits, including a Herbert Perez two-run shot as the Pelicans were now down 5-1.

From that moment on, it was all about playing catchup as an Ezequiel Pagan double in the fourth, and a three-run Kevin Made homer in the sixth pulled the Pelicans within 6-5.

Trailing 8-5 in the eighth, Ethan Hearn kept them within striking distance with a solo shot before the Jacob Wetzel RBI single in the ninth tied things up and sent the game to extras.

His third home run of the year is a solo shot in the eighth.

Mudcats 8, Pelicans 6 in the bottom half. pic.twitter.com/c8BhX1sMPQ

Talk about a massive shift in momentum. The Pelicans continued their late-game surge with Pagan delivering the game-winning single in the 10th to cap off the 10-8 win. Pagan led the way with three hits to go with three RBIs as he was one of three multi-hit performances. Triantos and Hearn added multi-hit games, with Made delivering three RBIs.

The ACL Cubs haven't gotten off to the start they wanted, dropping the season's first two games. Wins are nice to have at this level, but it is more about development more than anything.

After pushing home two runs in the first, the Guardians busted the game wide open as a five-run fourth inning led to the game sitting at 7-0. That score would hold until the Cubs final at-bat when Cristian More ended the shutout with an RBI double. Two more runs came across to score in that ninth, but the Cubs still fell 7-3. More led the offense with two hits, while Cristian Hernandez and Ronnier Quintero added hits.

DSL PIRATES 4 - DSL CUBS RED 3: Had it not been for a three-run fifth inning, the DSL Red squad would have started 2-0. Samuel Rodriguez looked excellent in his four innings, striking out three and allowing just two hits.

From an offensive side of things, Andrews Cruz continued his great start from an RBI side of things as his sacrifice fly put the Cubs up 1-0 in the third. That lead doubled with a wild pitch, but a three-run fifth saw the Pirates storm in front 3-2. Erbin Jaque tied things up with an RBI single in the sixth, but the Yordany De Los Santos single in the bottom of the sixth was the game-winning hit.

Darlyn De Leon added three more hits from the leadoff spot to lead the way for the Cubs. A part from him, only Jacque managed to record a hit.

The only short-season team to come out on top was the DSL Blue team as they disposed of the Yankees. Gabriel Agrazal got the start and allowed just one hit with four punchouts across four scoreless frames. He gave way to Jair Jimenez, who battled through three innings of command issues to allow just one run before Luis Reyes earned a six-out save, with five of those outs coming via the strikeout.

All the runs in this game came after the sixth inning, with Fidel Montero putting the Yankees on top 1-0 with an RBI double in the sixth. That lead was short-lived as a costly error in the bottom of the sixth led to the winning run crossing home with the Cubs up 2-1. DSL Blue added another run in the seventh off another Yankee error as they had five errors in the 3-1 loss. Jefferson Rojas (2) and Raul Guzman (1) had all three hits.