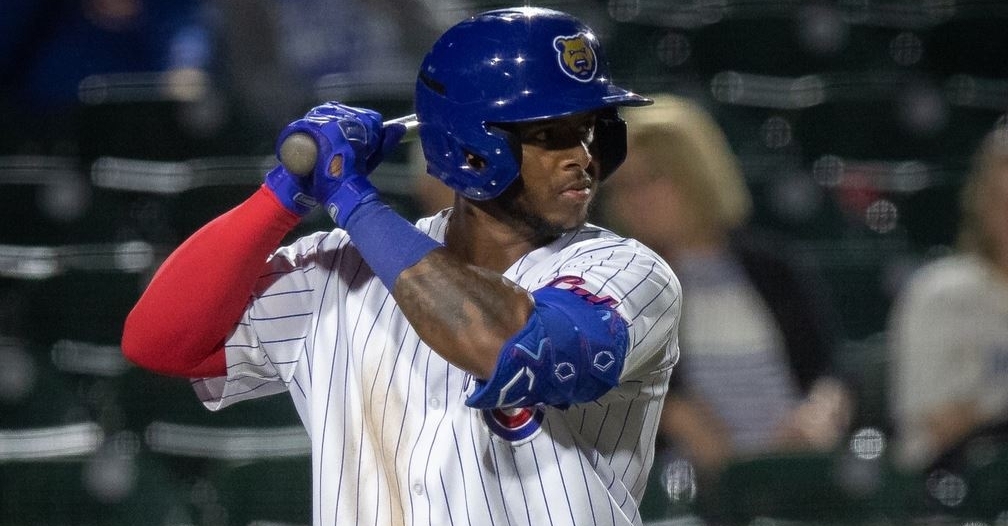 Velazquez has been impressive at Iowa (Photo via Iowa Cubs)

Eventually, you have to think the Cubs minor league system will cool off. There is no way an organizational system can play .750 or better for the better part of two weeks, which fans have recently seen from the Cubs organization.

That changed on Saturday night as the Cubs saw Myrtle Beach pick up the lone win in what was otherwise a tough night. Two games were decided via blowout fashion, while the other ones were decided by one run.

Riding a three-game winning streak and a chance to earn the series win, Columbus managed to pick up a hard-fought win topping Iowa 3-2. Matt Swarmer made the start and received a tough-luck loss after giving up three runs in five innings. Wyatt Short and Brendan Little gave the Cubs four scoreless innings of relief, but the offense was held in check.

Tanner Tully continued his tremendous start to the season, going 5 2/3 innings to improve to 4-0 on the season. One thing that Swarmer has done a great job of going back to the second half of last season is limiting the long ball. That got him in the second as David Fry belted his seventh homer of the season for the quick 2-0 lead. Fry would be all the offense that Columbus would need adding a game-winning sacrifice fly in the fourth to extend the lead to 4-0.

The Cubs managed to pull within 3-2 in the bottom half of the fourth inning, with Nelson Velazquez connecting for his second AAA homer of the season.

That ball got out in a hurry.?? Nelson Velazquez gets us back in it with this two-run shot in the fourth. pic.twitter.com/HRkEZuIWZg

Unfortunately, those would be the only runs Iowa would come away with, falling by that 3-2 score. Iowa had just three hits, with Nelson Maldonado and Jared Young joining Velazquez. Clint Frazier and David Bote went hitless.

Although the Smokies lost the series to their in-state rival, this was the most exciting game of the night. After being down 8-1 at one point, the Smokies used a six-run inning to pull within 8-7 and ultimately lost by that score.

Max Bain got the start for the Smokies and didn't pitch terrible, allowing three runs on seven hits across four innings before the bullpen got touched up. For the Lookouts, it was all about Ryan Williamson early as he kept the Smokies offense in check for five innings.

The game's early stages saw each team exchange blows, with TJ Hopkins putting Chattanooga on top 1-0 with a single in the first before Bryce Ball answered in the bottom half. Quin Cotton went deep for a solo shot in the second before another Hopkins single extended the Chattanooga lead to 3-1 in the third.

Hopkins continued to add to an already great game using a two-run double in the fifth to stretch things to 5-1. In the sixth, Hopkins added a bases-loaded walk as part of their three-run inning, leading 8-1.

However, things got much more interesting at the bottom of the seventh, with the Tennessee offense starting to square up the Lookouts pitching. What began with an Alexander Canario two-run double was followed by a Chase Strumpf three-run homer as the Smokies were within 8-6. Levi Jordan added an RBI single to cap off the six-run inning as the Smokies pulled within 8-7.

Despite having more chances over the final two frames, the Smokies couldn't cash in and lost by that 8-7 score.

The Smokies' comeback falls just short. Chase Strumpf, @CStrumpf, goes 2-4 with his 7th home run of the season. Back at it tomorrow for our 13th game in 13 days at home. pic.twitter.com/SAxLZ3SJe2

After dropping three straight against South Bend, the Timber Rattlers responded by scoring six runs across the first two innings. Joe Nahas was the culprit of that, as he didn't even get through the second before the bullpen took over.

Wisconsin wasted little time grabbing a 3-0 lead in the first, and they did that damage without a homer. Tristan Peters and Wes Clarke picked up RBI singles while Carlos Rodriguez added an RBI double. The same can be said about the second inning as a pair of RBI singles from Joe Gray Jr, and Clarke mixed with an RBI fielder's choice saw Wisconsin race out to a 6-0 lead.

Had they not scored the rest of the way, they would have had enough runs to win, but that wasn't the case on Saturday. Ashton McGee made things 7-0 with an RBI single in the fifth before the Zavier Warren homer, and Rodriguez's single put the Timber Rattlers on top 9-0 in the eighth.

It may have taken the game's duration for South Bend to score, but better late than never, with the Fabian Pertuz double ending the shutout bid 9-2. Owen Caissie continued his excellent series with two more hits as Jordan Nwogu, and Pertuz joined him.

Back at it tomorrow for the series finale. pic.twitter.com/0BlCqzXrPy

On the strength of a four-run inning, the Pelicans managed to take a 5-0 lead and then cruised to take the 5-0 series lead against Columbia. Luke Little continues to give the Pelicans short, but successful spurts in the starting rotation and delivered with four punchouts across three innings.

With Ben Kurdna being able to match him pitch for pitch, the Pelicans bullpen needed to set the tone, which Tyler Santana did. Across his five innings, Santana surrendered just one earned run and improved to 4-0 on the season while lowering his ERA to 2.70.

The Pelicans held a slim 1-0 lead through five innings as a fourth-inning wild pitch led to that run. Once the sixth inning got going, you could see things trending in the right direction for the Pelicans as their offense started to get hot.

Juan Mora provided the game-winning hit as his RBI double extended the lead to 2-0. That double was followed by a James Triantos triple and a BJ Murray Jr single, and just like that, it was 4-0. Ethan Hearn capped off that four-run frame with a triple, and the Pelicans were in firm control 5-0.

Even with the Guillermo Quintana homer ending the shutout in the eighth, it was all the offense they would have as the Pelicans continue to have their way following the 5-1 win. Pete Crow-Armstrong was one of three players to record multiple hits joining Triantos and Hearn.