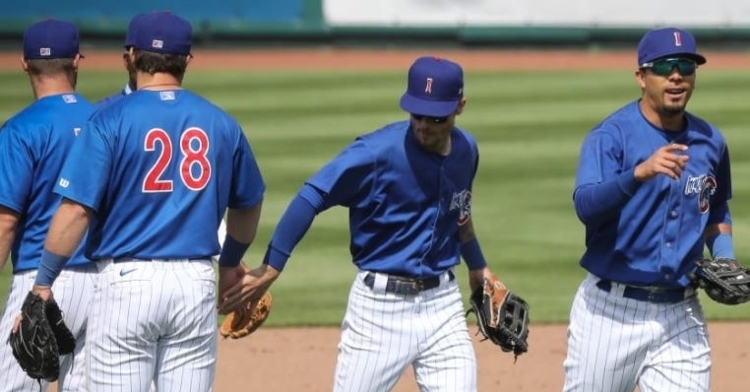 Fireworks came early this year as the Cubs farm system provided fans with plenty of fireworks on Sunday. Across the four games that took place, the Cubs system was responsible for 37 total runs as the offense was certainly not an issue yesterday.

The pitching at times did struggle, but when you score nearly 40 runs combined across four teams, you're doing something right offensively. This has been the type of offensive showing that most of the teams in the Cubs system have been waiting for, and it was great to see not one, not two, but all four teams break out the sticks in what was a 3-1 day on the farm for the organization.

IOWA CUBS 8 – SAINT PAUL SAINTS 3 Of all the games on Sunday, this scoreline is a little deceiving when you think about it. Through eight innings, the Cubs offense was held in check and were dominated in the process. Joe Biagini got the start allowing three runs in five innings of work, with all three of those runs coming in the bottom of the first. Ryan Jeffers, Damek Tomscha, and Keon Broxton were responsible for the RBIs as the Cubs were put in an early hole.

The rest of the game was a pitchers' duel as Michael Rucker, Kyle Ryan, and Ryan Meisinger combined to toss four scoreless frames where they allowed just one hit and struck out six. They kept the game close and gave the offense a chance as Iowa pushed across all eight of their runs in the top of the ninth. Taylor Gushue may want to stay in Saint Paul forever as his RBI single opened the scoring for Iowa as his fantastic series continued.

An Andrew Romine single made things 3-2 before Sergio Alcantara delivered the game-winning RBI double to put Iowa in front 4-3.

With the bases loaded and Iowa still threatening, Trayce Thompson continued his excellent start with Iowa clearing the bases with a double to make things 7-3. Nick Martini followed that double up with a double of his own as the Cubs rallied for the 8-3 win.

Thompson was one of four players who collected a pair of hits as he joined Alcantara, Romine, and Gushue as they were responsible for seven of the game's eight RBI's. Martini picked up the other RBI with his hit as Rafael Ortega and P.J. Higgins recorded one hit. One day after picking up three hits, Ian Miller was back in the leadoff spot, going hitless, as was Patrick Wisdom, who is still searching for his first hit of the season.

WOW! An eight-run ninth inning for the win! pic.twitter.com/zNsCsL4rSV

ROCKET CITY TRASH PANDAS 12 – TENNESSEE SMOKIES 8 (13 innings) It isn't too often that extra-inning games go beyond 11 innings anymore with a runner on second base. What is even rarer is to see a team deliver a walk-off grand slam in extras. That was exactly what happened Sunday as David MacKinnon struck for a 13th inning grand slam to lift the Trash Pandas to the 12-8 walk-off win.

Cam Sanders got the start, and his bumpy ride continues this season. After silencing Rocket City to open the series, the Trash Pandas touched him up for four earned runs in four innings of work as the balls were flying out of the yard. Look no further than the suddenly hot Vance Vizcaino, who went deep for the second straight game in the first inning to give the Smokies a quick 2-0 lead.

That lead was short-lived as the Trash Pandas upped the ante in the bottom of the second when Ibandel Isabel connected for the Grand Slam to make things 4-2. That was the first of two Rocket City Grand Slams on the afternoon. Solo homers by Connor Myers in the fourth and Tyler Payne in the fifth tied things up 4-4 as the home run derby continued.

It took seven innings for the first non-home run RBI to score and credit that to Gavin Cecchini, whose two-run single put Rocket City back in front 6-4. The next innings saw Darius Hill get in on the fun as RBI double tied things up 6-6 and helped send the game to extras. After tying things up in the eighth, Hill was at it again in the 10th, using an RBI single to put Tennessee up 7-6.

Rocket City answered yet again in the bottom of the 10th off an Ibandel single, and once again, things were tied 7-7 as the game continued. That score held up until the 13th inning, when Tennessee was once again able to take the lead. This time, Levi Jordan came through using a sacrifice fly to put the Smokies back in front.

Once again, Rocket City would not go down without a fight getting a Michael Stefanic single to bring things even 8-8. That set the stage for MacKinnon, who came to bat with the bases loaded and game on the line. MacKinnon crushed the Smokies hearts with one swing as his grand slam lifted the Trash Pandas 12-8 in walk-off fashion.

If you haven't paid attention to Hill this season, start doing so now as the kid continues to hit. After starting the year with Myrtle Beach, Hill is now with Tennessee, where he went 5-6 yesterday with three RBI's and reached base six times in total. Myers added three hits of his own to go with Vizcaino and his two hits as they were the catalysts offensively. Miguel Amaya went 1-7, with Jake Slaughter going 0-3 with two walks.

SOUTH BEND CUBS 12 – BELOIT SNAPPERS 6 Offense continued to be the theme in A ball, with South Bend doubling up the Snappers 12-6. With Peyton Remy tossing five shaky innings, it was up to the offense to back him up, which they did in a big way. RBI singles from both Delvin Zinn and Tyler Durna gave South Bend a 2-0 lead in the first, only to have Beloit tie things up in the bottom half of the inning off a Nic Ready homer.

Home runs were the theme early on, with Griffin Conine going deep in the third to put the Snappers in front 3-2. Durna answered that homer with one of his own in the top of the fourth as things were even once again 3-3. Down 4-3 heading into the fifth, the Cubs offense erupted with a six-run inning to not only take the lead but to seize control.

Singles by Nelson Velazquez and Yonathan Perlaza got things started as they put South Bend back in front 6-4. Bryce Windham added some much-needed insurance with a two-run single extending the lead to 8-4 before a D.J. Artis fielders choice made things 9-4 Cubs. Velazquez added a homer in the top of the sixth to make things 10-4 before Reivaj Garcia, and Durna capped off the scoring for the Cubs. Devin Hariston and Conine added solo shots late in the game, but it wasn't enough as the Snappers fell 12-6.

Durna had a massive night at the plate, going 3-4 with three RBIs as everyone but Jake Washer picked up a hit. Windham, Zinn, Velazquez, and Cole Roederer each collected two hits on the afternoon as the top of the order was on base frequently.

Following his rough outing last time out, Burl Carraway returned in relief only to walk two more batters. However, he did strike out three in his inning of work and was able to get out of the inning without allowing damage.

What a way to end off the series! The Cubs' best offensive output of the season sends them back to South Bend with a victory! #SBCubs #CubTogether pic.twitter.com/JSAUBZKhi1

MYRTLE BEACH PELICANS 9 – AUGUSTA GREEN JACKETS 7 (10 innings): The Cubs system was greeted to two extra innings games, with Myrtle Beach earning the second one. With Tennessee losing on a walk-off grand slam in their game, it was only fitting to see Matt Mervis walk off Augusta with a three-run shot to lift the Pelicans 9-7 in 10 innings.

Crack of the Bat Play of the Game | @VinesPlumbingSC pic.twitter.com/Qd3DeZ4cyC

Adam Laskey got the start and lasting just four innings as he put the Pelicans in a 4-0 hole in the process. An Ed Howard single in the bottom of third got the Pelicans on the board, but they were still trailing 4-1. Add in a two-run Edmond Americaan shot in the fifth, and Myrtle Beach was suddenly within 4-3.

Just when it looked as if momentum was entirely on the Pelicans side, Cade Bunnell connected for a solo shot in the top of the seventh ahead of a Brandon Parker sacrifice fly to extend the Green Jackets lead to 6-3. Myrtle Beach continued their comeback effort in the bottom of the seventh when Americaan connected for his second homer of the game to make things 6-4.

A Yes Santana single made things 6-5 before Mervis picked up the first of his four RBIs with a sacrifice fly to make it a 6-6 game and sent things to extras. In the extra frame, Parker put the Green Jackets in front as his sacrifice fly made things 7-6. With Santana starting the inning on second base, Howard earned a walk putting the winning run on first. Facing a full count, Mervis delivered the biggest hit of his young career as his homer lifted the Pelicans to the 9-7 walk-off win.

Not only did nearly every player record a hit, but the top of the order accounted for six hits, with Americaan, Santana, and Howard each collecting a pair of hits to go with Howard's walk. Yohendrick Pinango added one hit along with Ethan Hearn, who now has a hit in two straight games. Mervis led the way with four RBIs.

That’s what Myrtle does.