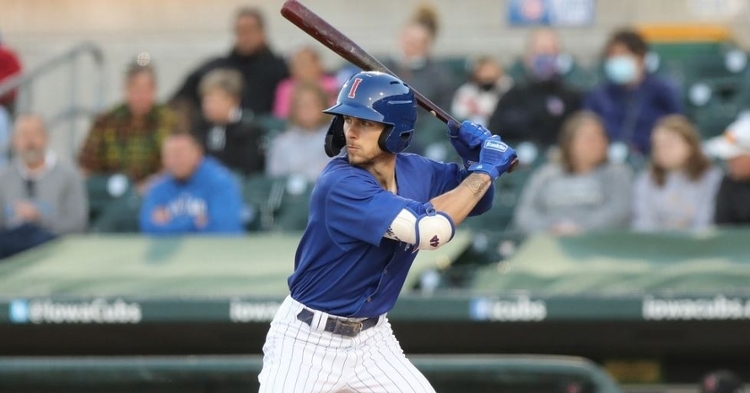 Miller is an intriguing player with his speed (Photo via Iowa)

Wednesday was a perfect night on the diamond for the Cubs in more ways than one. Not only did the major league team win their second straight game to claim their first series in a month, but the minor leagues posted a perfect 6-0 record on the night, including DSL going 2-0 in a series of makeup games from earlier in the year.

That is not something that happens often, but when it does, it is worth noting. Across the board on Wednesday, the Cubs got great play from the top down at every level where all three phases of the game showed up. This was one of the better nights for the system all season, and something fans would like to happen more often.

After getting walked off twice on Tuesday, Iowa hoped to turn the tables against the Saints on Wednesday. Instead, the Cubs found themselves in a similar situation where the Saints managed to send the game into extras. Fortunately, Iowa was able to withstand that rally and held them off.

Mike Hauschild continues to give the Cubs length in his starts going six innings once again, but when you allow five runs, it makes it hard on your team. Fortunately, the Cubs offense was able to rally as they certainly needed to. Following a run from each side in the first, the Iowa offense started to find their stride in the third, with Jared Young picking up an RBI single for his second RBI in as many at-bats. A Trent Giambrone home later in the inning had the Cubs in front 4-1 before Edwin Figuera extended that lead to 5-1 with his first homer of the season in the fourth.

Homers continued to be a theme all night, with Gilberto Castellanos and Jimmy Kerrigan going deep in the bottom of the fourth to pull within 5-4 before Tomas Telis tied things up one inning later with a homer of his own. Still tied 5-5 in the seventh, Mark Contreras cashed in with a huge double to put the Saints on top. That looked like it would be the winning run until the Greg Deichmann homer in the ninth tied things up ahead of a Nick Martini single that gave Iowa a 7-6 lead.

Welcome back, Greg Deichmann! He tied the game in the ninth with this home run and gave us the lead in the 10th with an RBI single! He is your @EMCInsurance Player of the Game. pic.twitter.com/d5kbH5mfrw

Looking to close things out in the ninth, Dillon Maples battled through command issues and uncorked a wild pitch that ultimately tied the game and sent it to extras. In the extra frame, Deichmann provided the winning run with an RBI single before Ian Miller's three-run shot was the dagger in the Cubs 11-7 win. Deichmann and Miller were just two of the five players with multiple hits joining Alfonso Rivas, Young, and Martini. Miller led the way with three RBIs.

What a win!! We scored FOUR runs in the 10th inning to tie the series with St. Paul! pic.twitter.com/w3CwnngA2K

Returning to the diamond after Tuesday's postponement, the Smokies used a four-run sixth inning to grab the lead and held off the Barons 6-4. Dakota Chalmers continues to go about his business on the mound, giving the Smokies five innings of three-run ball in a no-decision effort. He gave way to Bryan Hudson and Brendon Little, allowing just one run in the final four innings.

Like the Iowa game, each team benefited from a first-inning run with Yolbert Sanchez going deep in the top of the first and Brennen Davis answering with a solo shot in the bottom. That score held until the fourth when Carlos Perez connected for his ninth homer to give the Barons a 2-1 lead before Xavier Fernandez added an RBI single making things 3-1.

Down 3-2 in the sixth after Andy Weber's fifth-inning RBI double, the Smokies offense got to the Barons bullpen and managed to take the lead. A bases-loaded walk to Chase Strumpf tied things up, but it was the Christopher Morel bases-clearing double that proved to be the difference with the Smokies on top 6-3. Sanchez added an RBI groundout in the seventh to pull within 6-4, but that was as close as the Barons would get.

Nelson Maldonado led the offense with two of the team's six hits, while Davis, Morel, Weber, and Strumpf picked up the other four. Morel finished the day with a team-high three RBIs, with Nelson Velazquez going hitless.

After a series of rough games, the Cubs were finally able to put it all together, topping Quad Cities 5-1. Behind another strong effort for Joe Nahas, who lowered his ERA to 3.34 following six innings of one-run ball, the Cubs took down the league-leading River Bandits.

Nahas was strong all game long, but in the second, he fell behind early when John Rave took him deep for his 11th homer of the season. Outside that, the River Bandits couldn't get much going as Nahas allowed just three hits before handing the ball off to Danis Correa and Eduarniel Nunez. Speaking of homers, Harrison Wenson went deep for the fifth time in the bottom of the second as he provided the game-winning hit for the Cubs, with South Bend leading 2-1. They would add another run in the third off a wild pitch extending their lead to 3-1.

For the second game in a row, Bradlee Beesley was right in the middle of a lot of action, picking up a bases-loaded hit by pitch to extend the lead to 4-1 in the fourth and then adding an RBI single in the sixth. He provided the final two runs of the day for either side as the Cubs got back to their winning ways 5-1.

For the second day in a row, Jake Slaughter led the offense with a pair of hits, with Yonathan Perlaza joining him. Luis Vazquez, Beesley, Alexander Canario, and Wenson all collected hits in the win, with Beesley staying red hot since returning from the ACL.

The best way to respond from a blowout loss is to return the favor the following night. That is exactly what the Pelicans did. With Tyler Schlaffer on the mound, the righty delivered as he tossed six impressive innings of two-run ball, with one of those runs earned to pick up his first win of the season. Myrtle Beach also saw 2021 sixth-round pick Riley Martin make his season debut striking out a pair in one inning of work.

Not only was pitching strong all night for Myrtle Beach, but the offense made things easy by grabbing the early lead in the second. A Yohendrick Pinango single opened the scoring for Myrtle Beach, but Ed Howard drove in the game-winning run as his single had the Pelicans in front 3-0. Following a Quincy Hamilton sacrifice fly in the fourth that had the Woodpeckers on the board, Kevin Made answered as his single stretched the lead to 4-1.

The Woodpeckers continued to keep things close in the sixth, with Nerio Rodriguez picking up an RBI single to pull within 4-2. That would be as close as Fayetteville would get, as singles by Jordan Nwogu and Pablo Aliendo put the Pelicans on top 6-2 in the seventh. Pinango added an RBI double in the eighth to cap off the scoring in what was a 7-2 Pelicans win.

Both Made and Ezequiel Pagan had great nights at the dish as the duo collected six of the team's 14 hits. Jacob Wetzel and Pinango added multi-hit games, with Pinango responsible for a pair of RBIs. The recently demoted Josue Huma was the lone player without a hit in the win.

Typically, Wednesday is an off day for DSL teams, but with so much rain going through the area last week, several makeup games needed to be played. One of those games was the Cubs and Dodgers, which the Cubs won in extras 5-4. This was a makeup game from July 23rd, so the stats were based on their early-season numbers.

Not only did Frank Hernandez put the Cubs in front with a solo homer in the second, but an Offerman Hernandez doubled the Cubs lead at 2-0 before a wild pitch had them on top 3-0. Add the Joanfran Rojas RBI single in the third, and the Cubs were on cruise control early, leading the Dodgers 4-0. It wasn't until the fourth inning when the Dodgers got on the board, but once they did, it was as if they couldn't be stopped.

Luis Morales opened the inning up with an RBI double to put the Dodgers on the board before the Juan Diaz grounder cut the deficit in half 4-2. Needing a clutch hit, Thayron Liranzo cashed in with an RBI single, and just like that, things were tied 4-4 with the teams heading to extras. Not only did they need extras, but three extra innings, with Leonel Espinoza picking up the game-winning single in the ninth to lift the Cubs 5-4.

In the makeup of Tuesday's postponement, the Cubs faced the Dodgers for the second time on Wednesday and once again emerged victorious 6-4 to improve to 11-12 on the season. This time it required a quartet of pitchers to help pave the way, but Oliver Roque and Michael Arias combined for three scoreless innings to end the game and preserve the Cubs win. Arias registered his first save.

Unlike earlier in the day that saw the Cubs score first, the Dodgers grabbed the early lead using a wild pitch and heads up baserunner to push across a pair of first-inning runs for a quick 2-0 lead. That lead grew to 3-0 in the second after Luis Guerra doubled home a run, but it was the Cubs answering in the third using a Wally Soto triple to get on the board before he came home on a wild pitch to pull within 3-2.

One inning later saw the Cubs pull even as an error in the field helped make things 3-3. Not to let that bother them, Guerra came through with his second RBI double in as many at-bats, and once again, the Dodgers were in front 4-3. Down by that score in the fifth, the Cubs used another wild pitch to tie things up 4-4 before Cristian Hernandez came up clutch when it mattered most. His RBI single not only gave the Cubs a 6-4 lead, but proved to be the difference as the Cubs held on for the win.

Rojas and Soto were the leaders on offense, collecting a pair of hits to go with Soto's RBI. Daniel Ferreira and Cristian Hernandez added the other two hits, with Hernandez picking up the winning RBIs with his single.