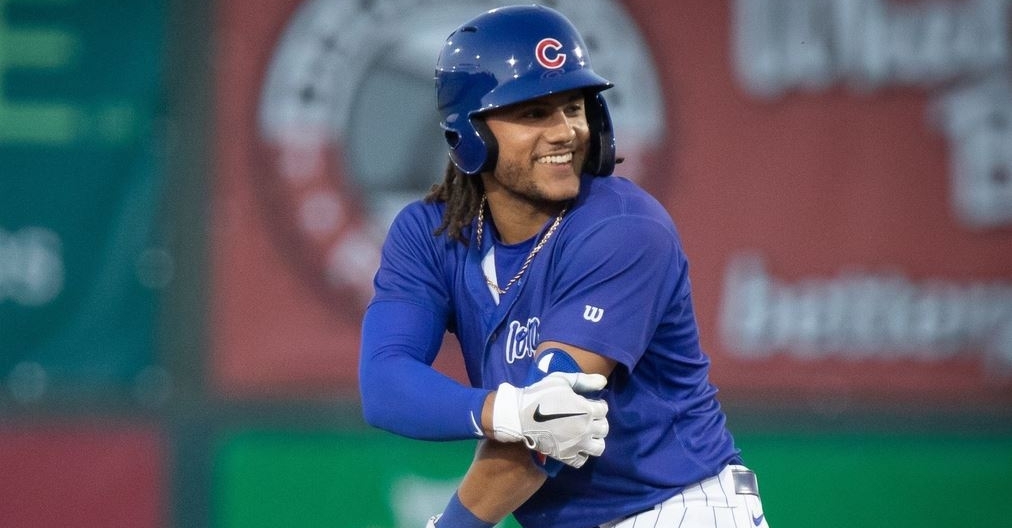 They always say hitting is contagious. Well, wins are contagious too. It is amazing what happens when you have a minor league system coming off a successful week. That success tends to carry over to the next week, which is precisely what happened on Wednesday with the Cubs system posting a 3-1 mark on the evening.

Fans were treated to everything across the board on Wednesday. You had strong pitching from a couple of teams while there was an offensive explosion from others. The bottom line is the Cubs system showed what they are capable of in every facet of the game on Wednesday.

The Cubs can't seem to solve the Saints at home as they fell to 0-8 against Saint Paul at Principal Park. Even with Ryan Kellogg delivering a good start through four innings, the Cubs offense was held in check falling 4-2. Kellogg went four innings and was charged with three earned while the offense struggled to get much going.

Scoring may have been scarce for the Cubs, but early on, that wasn't the case with Michael Hermosillo continuing his tear with a solo shot in the first to give the Cubs a 1-0 lead. Iowa was able to double their lead in the third, as Tyler Ladendorf came across to score on a wild pitch. Following that second run, it was all Saints as they closed out the game with four unanswered runs, including three in the fourth, which ultimately ended Kellogg's night.

Brent Rooker got the scoring started for the Saints, as his RBI double made things 2-1. After advancing to third, Rooker trotted home on a Mark Contreras sacrifice fly, and just like that, it was 2-2. Saint Paul continued to swing the bats well in the fourth, with Damek Tomscha providing the game-winning run with an RBI single putting the Saints in front 3-2.

Kellogg gave way to Justin Steele in relief as his rehab stint continues. For the most part, Steele was solid in his 2 2/3 innings of work, but he was charged with an earned run in the seventh as the Roberto Pena single had the Cubs down 4-2. Steele has posted a 2.70 ERA in his five Iowa appearances since returning and could be called up soon.

The Cubs had a great chance to tie things up in the bottom of the eighth, but some careless baserunning mistakes led to a promising inning coming to an end with the Cubs falling 4-2. The Cubs were held to six hits, but Tony Wolters had two of those as he is now hitting 303 on the season. Ian Miller, Hermosillo, Trent Giambrone, and Ladendorf all had one hit for the Cubs, while Trayce Thompson, Nick Martini, and Abiatal Avelino went hitless. Kyle Ryan also got on the mound and tossed a scoreless inning of relief, lowering his ERA to 1.59 on the season.

Led by some early offense and strong pitching, the Smokies were able to take down the Lookouts to even the series with a 6-1 win. With Dakota Chalmers setting the tone for the pitching with four innings of one-hit ball, the offense was able to settle in, and that is what they did across the first two innings.

The Smokies wasted no time busting things wide open in the first as they had the bases loaded and a golden opportunity to score. Jared Young made sure that would happen as he cleared the bases with his fifth double of the season, giving the Smokies a 3-0 lead early. A Brennen Davis single a few pitches later not only brought home Young, but extended his hitting streak as the Smokies were clicking early 4-0. Young wasn't finished, as he added a second RBI double one inning later to push across two more runs with the Smokies in front 6-0.

Although it would have been nice to see more offense in the final seven innings, sometimes early offense is enough as the pitching dominated things from there on out. Chalmers didn't last long enough to get the win, but he pitched well as Juan Gamez entered the game in the fifth and secured the win. Gamez allowed the lone run in the game, although it was unearned. That didn't seem to matter as Brandon Hughes and Ethan Roberts closed out the 6-1 win. Roberts was especially impressive, tossing two perfect frames to go with four strikeouts.

Young may be the hottest hitter on the planet right now, going 3-5 with two doubles and five RBIs as his average is sitting at .447.

.@jaredyoung9 with 5RBI on 2 doubles in last night's game. He finished the game going 3 for 5. #SmokiesBaseball #GoSmokies pic.twitter.com/3vRVoMwxmz

Read Garcia and Darius Hill collected two hits, while most of the lineup had at least one hit. Zach Davis was the lone player not to pick up a hit in the win.

Perhaps the most exciting game was in South Bend if you're a fan of offense. The Cubs used a pair of four-run innings to make up for some sloppy pitching and took down the Snappers 11-7. Max Bain continues to struggle as a starter this season, as Manager Michael Ryan had to mix and match a quartet of pitchers to get through this game.

With the Cubs down 1-0 in the third, Beloit took matters into their own hands using a pair of doubles from Kameron Misner and Bubba Hollins to grab an early 4-0 lead. South Bend wouldn't be intimidated by that early deficit as Yonathan Perlaza got them on the board with a two-run single in the bottom of the third before Nelson Velazquez tied things up with an RBI double.

The two sides continued to exchange runs in the fourth, with Minser picking up an RBI single in the top of the fourth before Delvin Zinn went deep in the bottom half of the inning to put the Cubs in front 6-5.

Once again, the Snappers had the answer in the top of the fifth as a bases-loaded walk to Marcus Rivera tied the game only to see Ricky Arcena give Beloit a 7-6 lead with a sacrifice fly.

Still trailing by a run in the seventh, the Cubs offense went to work as they used their second of two four-run innings to take the lead for good. Velazquez got that inning started with an RBI single, only to have Jake Slaughter pick up the game-winning RBI with a single of his own. Recently promoted Ryan Reynolds made sure to make his presence felt, as he added an RBI double later that inning putting the Cubs on top 10-7.

A Bradlee Beesley double in the bottom of the eighth pushed across the final Cubs run as they picked up an impressive 11-7 win against Beloit. Offensively, the Cubs pounded out 17 hits with Zinn, Velazquez, and Josue Huma, all with three. Harrison Wenson and Grayson Byrd added multi-hit efforts of their own as every starter had at least one hit in the win.

The Pelicans were able to withstand a late-game offensive surge to hold off the Greenjackets 7-5 and evened up the series. Richard Gallardo was looking to get back on track on the mound and looked good in his outing. He may have lasted just 2 2/3 innings, but he allowed just one run, which was a significant step forward.

Jeremiah Estrada had a magnificent outing, going 2 1/3 innings out of the pen allowing just two hits to go with five strikeouts. Even though Gallardo didn't last long, the offense backed him with plenty of support as four of their seven runs came in the first. Most of that damage was done via the Matt Mervis homer as the Pelicans raced out to a 3-0 lead. Jonathan Sierra added an RBI single later in that inning to give the Pelicans a 4-0 cushion. The lone run charged to Gallardo came in the bottom of the first when Landon Stephens picked up an RBI single. That would be the only offense Augusta would muster for quite some time as the Pelicans played with the lead from start to finish.

Following a Jordan Nwogu homer in the fourth that gave the Pelicans a 5-0 lead, Myrtle Beach picked up a pair of eighth-inning runs off a Jacob Wetzel homer and Sierra double to extend the lead to 7-1.

Rain delay is over and the Pelicans’ bats are still hot!

Little did they know, those two runs would be crucial as Augusta had plans of their own offensively. After being silenced most of the game, the Greenjackets began a comeback effort as a pair of errors paved the way for three runs.

Add in a Stephen Paolini sacrifice fly, and the Greenjackets were within 7-5 with momentum on their side. Fortunately for the Pelicans, Bailey Reid was able to stop the bleeding right then and there as he tossed 1 1/3 scoreless innings to secure his fourth save of the season. Sierra led the way offensively, collecting three of the team's nine hits to go with two RBIs. Wetzel added two hits of his while Mervis, Ed Howard, Yonhendrick Pinango, Nwogu added the hits for Myrtle Beach.