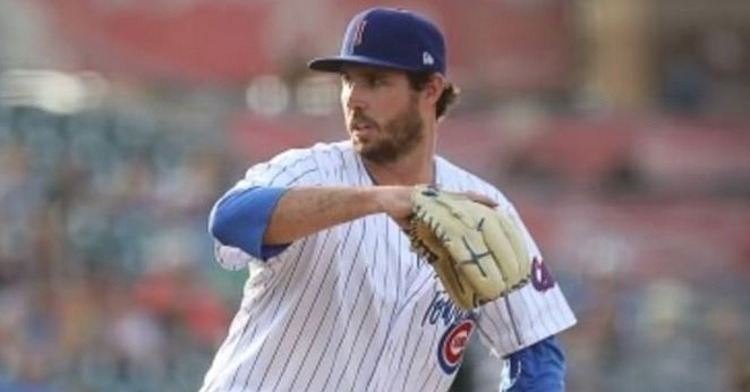 Kellogg was impressive in his first start (Photo via Iowa Cubs)

Friday was a better night on the farm for the Cubs system as a few more wins came than in previous days. Still, it was nothing but a .500 night with the organization going 2-2 on the evening. That is a vast improvement from where things have been recently, so I guess you could say that is a step in the right direction.

While two teams continue to hover around .500, two teams have struggled to win games going more than a week since their last win. A big reason for the AAA struggles have been the constant call-ups the Cubs have had to do the past month to get through their injuries. Once some of those players return, expect the wins to pick back up.

It took more than a week, but the Cubs finally won a game-ending not only an eight-game losing streak overall but a 13-game home losing streak in the process. Ryan Kellogg not only got the start but made his AAA debut, and he was impressive. Kellogg tossed five innings of one-run ball, walking two and striking out one to earn a much-needed win.

Kellogg's lone run allowed came in the top of the second when Connor Marabell ripped an RBI single to left. From that moment on, it was all Iowa as they scored nine unanswered runs. The first of those runs came on Jacob Olson and Vance Vizcaino RBI singles in the bottom of the second as Iowa took the lead and didn't look back.

Jacob Olson is your ?@EMCInsurance? Player of the Game! pic.twitter.com/Oe7ZuYF1nW

A Michael Hermosillo RBI groundout in the bottom of the third extended the lead to 3-1 before Iowa busted things open in the fourth. Vizcaino picked up his second RBI in as many at-bats with an RBI groundout, but it was the Dee Strange-Gordon two-run shot that was the decisive blow, with Iowa leading 6-1.

Dee Strange-Gordon gives us a 6-1 lead with this two-run shot! pic.twitter.com/BjpnPWIkdQ

Abiatal Avelino doubled home a pair of runs in the sixth, extending the lead to 8-1, before Olson capped off the scoring for Iowa with an RBI double of his own in the seventh, making things 9-1. With Brad Wieck on relief, the Clippers were able to push across a runoff the Taylor Gushue passed ball, but that was all they could do, falling 9-2.

Olson and Avelino had tremendous evenings, collecting three hits and driving in a pair of runners in the big win. Strange-Gordon and Vizcaino also had two RBIs in the win, with Nick Martini and Tyler Ladendorf picking up a hit.

While the Iowa Cubs were able to snap their skid on Friday, the Smokies were not as fortunate as they have now lost nine straight games and seven consecutive contests against the Trash Pandas. Cam Sanders allowed three runs in 4 2/3 innings of work as he walked four and struck out six in his start.

All the runs charged against him came on one swing in the second inning, with Izzy Wilson going deep for his 10th homer of the season to put Rocket City on top 3-0. The Trash Pandas never trailed after that even though Tennessee tried to make things interesting. The bottom of the fourth saw the Smokies close the gap to 3-2 with Nelson Maldonado ripping a two-RBI double to right, and suddenly we had a ball game.

Unfortunately, that was as close as the Smokies would get as the Trash Pandas continued to build on that lead. A sixth-inning error brought home the fourth Rocket City run, before the ninth inning, Ibandel Isabel homer pushed the Rocket City lead to 6-2. Darius Hill continued his fantastic season with an RBI single in the bottom of the ninth, but that was all she wrote in a 6-3 defeat.

Time to prepare for tomorrow. Join us tomorrow inside Smokies Stadium for UT Legends Night and as our Summer Firework Series presented by @CoorsLight and @Pepsi continues. #SmokiesBaseball #GoSmokies pic.twitter.com/34gVJjDuaj

What looked to be a 2-1 win for South Bend turned into a 5-2 loss as a nightmarish ninth inning was their undoing. Max Bain not only pitched great in his five innings of work but delivered his best start of the season. He allowed just one run on four hits and struck out a season-high 10 to go with two walks. He was a big reason why the Cubs held the lead late as he kept a potent Timber Rattlers offense in check.

The lone run Bain allowed came in the top of the fifth when Chad McClanahan put an end to the scoreless tie ripping an RBI double for the 1-0 Wisconsin lead. However, South Bend wasted no time tying things up in the bottom of the fifth, using a Jake Slaughter RBI groundout to pull even once again.

With Bain now out of the game, it became a battle of the bullpens, and it was South Bend who capitalized early. A Jake Washer double in the bottom of the seventh put the Cubs in front 2-1 as their bullpen looked to hold onto that advantage. With Eduarniel Nunez on to work the ninth, Wisconsin began to rally as he struggled to get anyone out.

Not only did a balk tie the game 2-2, but sloppy defense and a wild pitch allowed for two more runs to score as the Timber Rattlers led 4-2. Add in the je'Von Ward single, and Wisconsin not only pushed across four runs in the ninth but now led 5-2 as South Bend was left searching for answers before getting retired in the bottom of the frame.

Washer and Yonathan Perlaza paced the Cubs offense with two hits apiece, including the go-ahead RBI by Washer. Josue Huma was the only other player to pick up a hit as the Cubs offense was held to just five hits in the loss. Nelson Velazquez went hitless again as his recent slump continues despite still hitting .297.

South Bend surrenders three in the ninth to even up the series at two games apiece. pic.twitter.com/cLNmNUqXUt

Coming off being swept in a doubleheader, getting a win was critical for the Pelicans on Friday. Led by a quartet of pitchers who all tossed around two innings striking out 15, that was precisely the case on Friday as the Pelicans took down Augusta 6-2.

The very next inning saw Ryan Reynolds put Myrtle Beach on the board with an RBI single ahead of the Ezequiel Pagan sacrifice fly to tie things up 2-2. A Luis Verdugo homer in the fourth not only gave the Pelicans the lead 3-2 but the Pelicans in front for good from that point forward. That was the first homer of the season for Verdugo as he is settling into a regular role.

With his first home run of the season, Luis Verdugo is your Waccamaw Dermatology Player of the Game! #MBPelicans pic.twitter.com/PzKaHjPKQV

With a one-run lead and hoping to add on, Jonathan Sierra found himself in the middle of the next two runs, picking up an RBI single in the sixth before reaching on an error in the eighth and extending the lead to 5-2. Matt Mervis continued his impressive series with an RBI double in the ninth, and the Pelicans picked up a much-needed 6-2 win.

Yohendrick Pinango is playing his best baseball of the season right now, picking up three more hits to lead the offense and raising his average to 280. Reynolds joined Jordan Nwogu with a multi-hit effort as this was just the second time in his career that Nwogu connected for two hits or more. Flemin Bautista, Sierra, Mervis, and Verdugo rounded out the hits for the Pelicans on the evening.

Back in the win column!

We’ll take the momentum to Saturday night against the GreenJackets. #MBPelicans pic.twitter.com/WnuHd68qW2