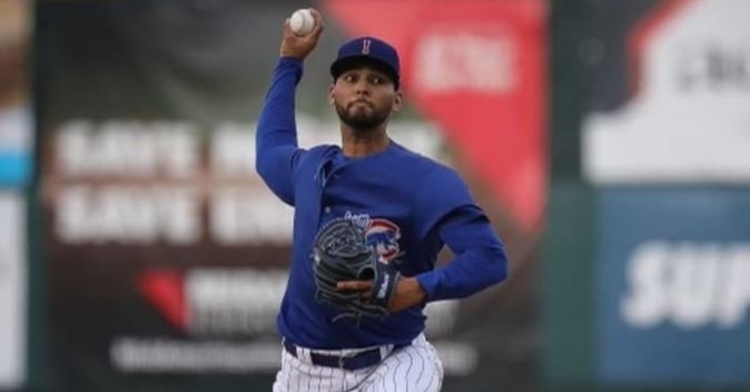 Things on the farm haven't been going as planned this weekend as all four teams have struggled to win games. Last night was another prime example of just that, as the Cubs system went 0-3 last night with one game getting postponed.

Multi-run innings were the theme of the night as several multi-run innings burned the Cubs system. That is ultimately what did them in last night as the pitching, for the most part, was ok minus those big innings they allowed.

Iowa made things interesting in this one as they nearly rallied from a late four-run deficit to plate three runs in the bottom of the ninth. Unfortunately, it still wasn't enough as the Saints held on for a 6-5 win.

Since returning from the IL, Tyson Miller has spent most of his time in the bullpen but made his first start last night. Miller was impressive in three innings of work, allowing just three hits to go with four strikeouts and no walks. He gave way to a bullpen who didn't pitch well last night, mainly Robert Stock and Trevor Megill, who allowed five of the six runs.

href="/cubs-baseball/player/taylor-gushue-413">Taylor Gushue gave Miller some early support immediately as his RBI single put the Cubs on the board. Two innings later saw the Cubs double their lead to 2-0, with Abiatal Avelino coming through with an RBI single of his own. However, once Miller was pulled, the Saints began to play with much more confidence and immediately soared in front in the fourth.

A JT Riddle single put the Saints on the board before a Ben Rortvedt connected for a two-run shot giving the Saints a 3-2 lead. With that score still intact, the Saints began to add some insurance runs late, with Damek Tomscha connecting for a solo shot ahead of a Tomas Telis groundout to put Saint Paul up 5-2. Tomscha wasn't done as he connected for his second homer of the game in the ninth as Kyle Ryan served up his first earned run of the season.

Down 6-2 in the ninth, Iowa began to make a comeback attempt as their offense finally decided to show up. A trio of walks from Andrew Romine, Jose Lobaton, and Ian Miller loaded the bases with no outs. With one out, patience continued to be the key, with Trayce Thompson earning another walk to bring home a run. Gushue followed that up with a single, and just like that, it was a 6-5 game.

Unfortunately, that was as close as the Cubs would get as the next two hitters were retired, handing Iowa a 6-5 defeat.

The comeback attempt fell just short as we dropped the fifth game of the series to St. Paul. pic.twitter.com/90bMs7Z2FI

Avelino had a great night at the plate connecting for a team-high 3 three hits to go with an RBI.

Romine and Gushue picked up a pair of hits, with Gushue leading the team with three RBIs. Dee Strange-Gordon had a rough night at the plate, going 0-5 with three strikeouts.

The Tennessee Smokies are turning into the Chicago Blackhawks of the Cubs system as they continue to play in extra-inning games. Last night was another extra-inning affair with the Lookouts walking off the Smokies 5-4.

Matt Swarmer was on the hill as his excellent start to the season continued. In six innings, Swarmer allowed three runs on five hits to go with five strikeouts. His ERA sits at 3.13 and continues to show he is ready for a AAA call-up at some point. Two of the runs Swarmer allowed came in the second inning when Lorenzo Cedoria doubled ahead of a Robbie Tenerowicz single made things 2-0. Chattanooga added to their lead in the sixth off a Jose Barrero single, putting the Smokies behind 3-0. It took a while for the Tennessee offense to get rolling, but they scratched across four runs across the seventh and eighth innings.

Erick Castillo got things started for them in the seventh inning as his blooper brought home a pair of runs to make things 3-2. Grayson Byrd kept the momentum going in the eighth as his RBI double not only brought home two more but gave Tennessee the 4-3 lead. A Wilson Garcia sacrifice fly tied things up 4-4 before Manuel Rodriguez pitched a solid ninth, sending things to extras.

Tennessee had a golden opportunity to strike first in extras as a Zach Davis hit by pitch, and Miguel Amaya walk loaded the bases with no outs. Unfortunately, the Smokies couldn't bring anyone home as that would prove to be costly. One batter into the bottom of the 10th, Yoel Yanqui ripped a single off Ben Leeper up the middle, and the Lookouts walked off Tennessee again.

Darius Hill continues to hit despite moving down in the lineup, as he was one of three players with two hits joining Bryd and Castillo. Christopher Morel added one of the team's nine hits, with Amaya being held hitless.

Sometimes all it takes is one inning, and that is all the Tin Caps needed. Using a three-run third inning, Matt Waldron and company were able to make that stand up as the Cubs fell to the Tin Caps 3-1. It was a tough-luck loss for starter Matt Kachmar who served up all three runs in 5 2/3 innings of work.

All those runs allowed came in one inning, with the third inning proving to be his undoing. Kachmar got Yorman Rodriguez to roll into a double play with the bases loaded, but a run still scored on the play putting Fort Wayne in front for good 1-0. Tirso Ornelas provided the game-winning hit later that inning as his ninth double of the season brought home a pair of runs to make things 3-0.

While the Cubs may have outhit the Tin Caps 6-3, half of those hits came in the sixth inning as that was the lone inning where South Bend would score. Bradlee Beasley got things started with a leadoff double before advancing to third on a Delvin Zinn single. Josue Huma put the Cubs on the board one pitch later with a sacrifice fly making things 3-1.

Brennan Davis followed that sacrifice fly up with a double, moving Zinn to third and putting a pair of runners in scoring position with just one down. Needing a hit to tie the game, that hit never came as South Bend not only stranded a pair in the sixth but once again in the ninth to fall to Fort Wayne 3-1.

While those three mentioned above had hits in the sixth, six different South Bend players recorded hits on the evening, with Chase Strumpf, Tyler Durna, and Nelson Velazquez getting in on the fun. Both Jake Slaughter and Caleb Knight went hitless in what was a mostly quiet offensive night. The South Bend pen was solid in 3 1/3 innings of relief, with Juan Gamez dealing a scoreless eighth. After battling through some command issues earlier this month, Burl Carraway appears to be figuring it out, striking out the side in the ninth for the second time this week.

It’s nice to see all our best friends in one place on this gorgeous night?? pic.twitter.com/jztsdUi0ea