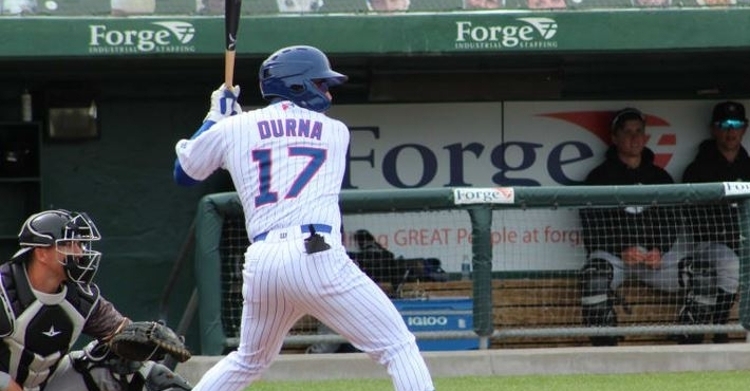 Unlike nights of the past, yesterday was a quiet day on the farm as only two teams were in action. This wasn't by design as the weather in the southeast corner of the country hasn't been too friendly this week and Myrtle Beach and Tennessee felt the wrath of Mother Nature all weekend long.

For the two teams that did take the field, it was a bag of mixed reviews as the Cubs posted a 500-mark going 1-1. Pitching was nonexistent in both games as both Iowa and South Bend allowed eight runs on the afternoon putting tons of pressure on the offense. While the South Bend Cubs lived up to the task at hand, Iowa didn't, and that is why the two teams split their games on the day.

For Marty Peavy and his Iowa Cubs, there is some serious soul searching to be had as his team fell to 10-18 on the season following an 8-3 loss to the 21-8 Omaha Storm Chasers. Adrian Sampson took the ball for the start and couldn't get the job done, allowing five earned runs in six innings of work. With the offense only being able to put up three runs, despite connecting for 10 hits, the five runs allowed was too much for this team to overcome.

With the Cubs down a pair in the third following a first-inning sacrifice fly off the bad of Meibrys Viloria and a second-inning homer by Bubba Starling, the Cubs responded with a pair of runs to pull even 2-2. Andrew Romine played a significant part in that as his big series continued with an RBI triple making things 2-1. Romine would then come home to score on a Trayce Thompson sacrifice fly as things were knotted up 2-2.

Andrew Romine is your ?@EMCInsurance? Player of the Game! pic.twitter.com/Y5NRGQoiGA

Speaking of a hot player, Ryan O'Hearn would love to see the Cubs the rest of the season as he connected for his fifth homer of the year in the bottom of the third to put Omaha back on top 3-2. Not only was it his fifth homer of the season, but fifth this series as he has had a series for the ages. Still holding onto that 3-2 lead in the sixth, the Storm Chasers played long-ball again, with Gabriel Cancel and Starling connecting for solo shots extending the lead to 5-2.

Iowa was able to pull within 5-3 in the eighth on a Michael Hermosillo RBI single, but the three-run Cancel homer in the bottom half of the eighth was the final dagger in what was an 8-3 Omaha win. Not only did Romine go 3-3 with his RBI, but he earned a walk reaching base all four times at the plate. Ian Miller and Hermosillo connected for a pair of hits, with Dee Strange-Gordon, Thompson, and Taylor Gushue adding the rest of the hits.

Final from Omaha. We'll head home and see you on Tuesday at 6:38! pic.twitter.com/LifiwU6PZI

It has been easy for Michael Ryan's group, but the defending Midwest League Champions are hanging tough, moving to 14-15 on the season. Derek Casey got the start and provided South Bend with a strong outing. He lasted 5 2/3 innings of work, surrendering just two runs on three hits while striking out eight. Casey did walk a season-high four hitters, but the offense backed him up with tons of production.

South Bend needed just two innings to provide enough support as they scored nine runs in the third and fourth innings. Five of those runs came in the third when Josue Huma broke a scoreless game with a two-run double before coming home on a Tyler Durna double. Nelson Velazquez capped off that big inning with his fourth homer of the season giving South Bend a 5-0 lead.

South Bend added four more runs in the top of the fourth on one swing as Durna belted a grand slam for his third bomb of the season, making things 9-0 in favor of South Bend. It took six innings for the Lugnuts to get on the board using a Jake Suddleson single and Drew Millas triple to close within 9-2. A seventh-inning Bradlee Beesley pushed the lead back to 11-2 before Suddleson added another RBI single ahead of a Millas walk making things 11-4.

Velazquez connected for his second homer of the game in the top of the eighth, but it was the Lansing offense that started to make things interesting off Jose Albertos in the bottom of the eighth. It all started with an Elvis Peralta double to make things 12-5 before Max Schuemann added a double of his own closing within 12-7. However, the Lugnuts were not quite done, with Cobie Vance adding a single of his own to make things 12-8 heading to the ninth. Graham Lawson wouldn't let things go any further, retiring the Lugnuts in order in the ninth, sealing the 12-8 win.

Durna had a massive night at the dish, picking up two hits, but making them both count as he drove in a team-high five RBIs. Bryce Windham and Velazquez added three hits each, with Velazquez driving home three on the strength of two homers. Edmond Americaan ended his hitless stretch with a single while Jake Slaughter went hitless from the eight spot. Burl Carraway was lit up in his inning of relief, allowing two runs on two hits, walking two, and striking out three.

Three home runs, the first grand slam of the season, and a 1-2-3 ninth inning. That's how you end off a series! See you back in South Bend on Tuesday! #SBCubs #CubTogether pic.twitter.com/NgJwcistrq

Tonight’s game against the Columbia Fireflies has been postponed due to inclement weather.

The game will be rescheduled on a date to-be-determined when Columbia returns to Myrtle Beach for the series beginning on July 13th.https://t.co/xzQ0w1aKN3

With a spot at the Super Regionals on the line, the Notre Dame Fighting Irish took on the Chippewas for the second time in three days. Needing a win to stay alive, the Chippewas hung tough early, but once the offense got going, it was over. Not only did the Irish push across 14 runs, but across the three Regional games, Notre Dame outscored the opposition 50-5, making for an easy three-game sweep on their way to a super-regional for the first time since 2002.

After defeating UCONN 14-9 earlier in the day to remain alive, the Chippewas had a ton of momentum and took an early lead in the fourth using a Griffin Lockwood homer to take the 1-0 lead. It was the first time the Irish trailed in the regionals, and that didn't last long. For the fifth time in the regional round, Nico Kavadas took a pitcher deep, tying things up 1-1. Notre Dame took the lead for good later that inning as an error allowed the Irish to jump in front 2-1.

A fifth-inning Grand Slam by Carter Putz was the exclamation point as the Chippewas were never able to recover from that shot. Ryan Cole added a three-run shot in the seventh to extend the lead to 9-2 before Putz went deep again for his second of the game. The long ball continued to play a vital role in the Irish offense, with Brooks Coetzee picking up a two-run shot of his own to make things a 12-2 game. RBIs by TJ Williams and Jared Miller capped off a five-run eighth as the Irish rolled into the Super Regionals following a 12-2 win.

Aiden Tyrell continued the trend of strong starting pitching for the Irish, going eight innings and allowing just two runs on eight hits to go with one walk and three punchouts. Spencer Myers went 3-3 from the top spot in the order, with Zack Prajzner adding three hits from the bottom spot in the lineup. Cole and Putz picked up a pair of hits in the middle of the lineup as nearly every starter had one hit. Despite going 1-2 in the game, Kavadas connected for another homer while also taking four bases on balls in the win. The Irish will learn their opponent on Monday as they will play the winner of Mississippi St and Campbell.