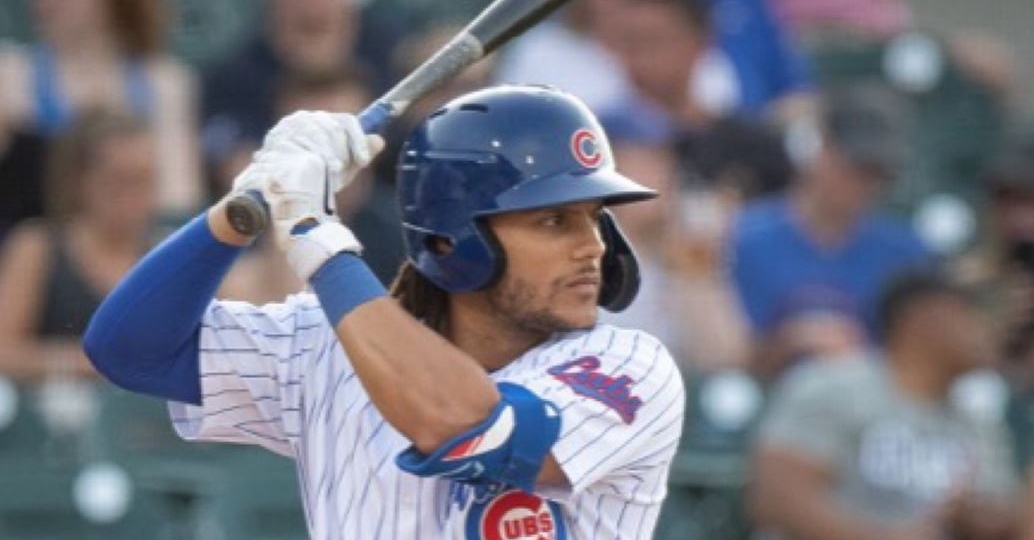 Losing can be challenging for even the most die-hard baseball fans.

However, not everything these days are bleak for Chicago Cubs fans, and you can look right at the minor leagues to see what is coming. Not only did the Cubs have some excellent prospects already, but they added plenty more over the trade deadline and now wins are starting to follow. Last night, the winning ways were on full display as the organization posted an impressive 4-1 night on the diamond.

The Cubs have had a hard time winning games in Omaha this year, but not last night. Led by Keegan Thompson and Matt Swarmer on the mound, the Iowa offense erupted for 10 runs as they crushed the Storm Chasers 10-2. With Justin Steele making his first MLB start yesterday, Thompson continues to get stretched out in Iowa, giving the Cubs four scoreless frames before turning things over to Swarmer. Thompson has yet to allow a run with Iowa this season.

Iowa wasted no time giving him the support he needed pushing across five runs in the second for the early lead. Zach Davies got that all started with a two-run single before Trayce Thompson remained hot with an RBI double. Alfonso Rivas capped off the scoring with an RBI single putting Iowa in front 5-0. Michael Hermosillo returned to action for the first time since July 23rd and didn't miss a beat going deep for the ninth time in the third to stretch the lead to 6-0.

First game back since July 23? No problem.

Michael Hermosillo is 2-for-2 with a double and this solo home run! pic.twitter.com/N1q1HMkoim

The Cubs held that 6-0 lead until the seventh inning when Bobby Witt was able to end the shutout bid with a two-run shot of his own to make things 6-2. Fortunately for the Cubs, they wouldn't let them get any closer, with Rivas picking up another RBI hit in the eighth before Nick Martini capped off the scoring with a three-run shot in the 10-2 win.

Your @GreatClips Clip of the Game is Nick Martini absolutely DESTROYING this three-run shot to put the game out of reach last night. pic.twitter.com/LiflJXl2Ws

Rivas had a strong showing at the plate leading with three hits, and was one of four players with multiple hits. Zach Davis, Martini, and Hermosillo were the others, with Hermosillo bringing his average to .324 on the season. Austin Romine continued his rehab assignment with another hit and is now hitting .500 for the year.

Even with Rocket City pushing across five runs in the seventh inning, the Smokies built a big enough lead to withstand that, holding them off 7-6. Cam Sanders was on the mound and delivered one of his best starts of the season. Sanders allowed just one run on three hits in six innings to go with five punchouts.

His run came in the top of the first when Luis Aviles homered for the 15th time this season. Thankfully, Sanders overcame that while the offense went to work in the bottom of the first. The red-hot Brennen Davis continued his torrid pace picking up an RBI double to tie things up only to see Nelson Velazquez homer for the second time in AA, giving the Smokies a 3-1 lead.

That lead continued to grow over the next three innings, with Davis adding a second RBI hit in the second before the Tim Susnara double in the third and the Nelson Maldonado homer in the fourth had the Smokies in front 6-1. Maldonado wasn't done as he would add a sacrifice fly in the sixth to put his team on top 7-1. Little did Tennessee know that RBI would prove to be the game-winner as Rocket City was ready to hit in the seventh.

With Ryan Lawlor on the mound, things were very uneasy as a bases-loaded walk to Brandon Davis pulled the Trash Pandas within 7-2. Then with one swing, David MacKinnon made things very interesting as his grand slam pulled Rocket City to within 7-6.

Fortunately for the Smokies, Erich Uelmen made sure they wouldn't get any closer as he locked down the two-inning save for his second of the season.

Brennen Davis continues to make a case for a September call-up as he led the once again with three hits. Maldonado, Velazquez, Christopher Morel, and Susnara also had good days collecting two hits in the win.

Smokies held onto the lead, taking game one of the series! Go Smokies! #SmokiesBaseball pic.twitter.com/77YbPQ4NTX

Led by a strong pitching performance and timely mid-game hitting, the Cubs managed to top the Tin Caps and open another series with a win. Making the start was Anderson Espinoza, who lasted 3 1/3 innings and allowed two runs. He did strike out five, but it was Matteo Bocchi who stole the show in relief. The right-hander gave the Cubs 5 2/3 innings out of the pen and allowed just one hit to bring his ERA to 2.94.

Things didn't look good for South Bend early as Espinoza struggled in the first two innings. After Tirso Ornelas gave the Tin Caps a 1-0 lead in the first with a home, they were able to double that lead in the second as a delayed double steal worked in their favor. That would be it offensively for them as Bocchi entered the game in relief and silenced their bats.

It took five innings for the Cubs offense to get going, but it was fun to watch once they did. Edmond Americaan got things started with a fielder's choice aided by an error that allowed two runs to score and drew the Cubs even. Bryce Ball would follow that error with an RBI single, giving the Cubs the lead for good 3-2. One inning later saw Yonathan Perlaza give South Bend some much-needed insurance runs as he went deep for the 10th time this season.

Speaking of homers, Alexander Canario is looking like a gem after being acquired in the Kris Bryant trade. Not only did he homer again last night, making that three straight games, but his homer may not have landed yet. That was the final run in another impressive 6-2 win.

ICYMI: South Bend slugged a couple of bombs in last night's victory, the tenth of the year for Yonathan Perlaza and the third in the last three games for Alexander Canario. Who will hit one tonight?#SBCubs | #CubTogether pic.twitter.com/uw41kBm2JK

Harrison Wenson joined Perlaza and Canario with a multi-hit effort as the Cubs offense was rolling. Ball, Tyler Durna, Bryce Windham, and Josue Huma all had hits in the win. Jake Slaughter and Americaan went hitless.

When you're hot, you're hot, and that is precisely what the Pelicans are right now. After falling behind 5-0 to one of the best teams in the league, Myrtle Beach rallied for six runs in the final three innings. That included three runs in the ninth to walk off the Riverdogs and pick up the seventh straight win.

Didier Vargas continues to deliver five-plus inning starts, even if the results are not always pretty. Vargas was tagged for all five earned runs despite not walking a batter and striking out four as the offense had a huge hole to climb out of.

Three of those runs came in the second when Michael Berglund gave the Riverdogs the lead 1-0 with a single before Alika Williams added to that lead with a two-run double. An Alexander Ovalles single in the third and the Tanner Murray double in the fifth had the Riverdogs rolling as they were on top 5-0. Even though it took the Pelicans seven innings to get rolling, better late than never as they started to take it to the Riverdogs pen.

Jacob Wetzel continued his RBI binge putting the Pelicans on the board with an RBI single and then coming around to score on the Matt Warkentin homer to make things 5-3. Still down by that score in the ninth, Yohendrick Pinango came through with one of his biggest hits of the season as his RBI double brought things back to even 5-5. Pinango wasn't done making an impact as he went on to swipe third before a throwing error allowed him to trot home and seal the walk-off win.

Of the seven Pelicans hits, only Luis Verdugo had a multi-hit game finishing with two hits. Pinango, Wetzel, Warkentin, Jordan Nwogu, and Pablo Aliendo rounded out the hits while Kevin Made suffered a hitless day.

6-0 run to end the game and absolute dominance out of the pen from Matteo Bocchi who went 5.2 shutout innings and allowed just one hit. Cubs win fourth in a row!#FlyTheWWWW #SBCubs pic.twitter.com/ju1AAb3vzB

The lone team to lose on Tuesday was the ACL Cubs who were given a taste of their own medicine. Led by a pair of five-run innings, the Giants got to the Cubs pitching while keeping their offense in check on their end.

After delivering three-shutout innings, Luis Devers ran into major trouble in the fourth, which ultimately sealed the Cubs fate. RBI singles from Adrian Sugastey and Anyesber Sivira mixed with the Damon Dues double had the Giants in front 5-0 and the Cubs searching for answers. The answer they were looking for came in the bottom of the fifth when Kevin Alcantara went deep for the second time to pull the Cubs within 5-2.

That would be all the Cubs could do offensively as the Giants busted the game wide open in the sixth. Singles by Kwan Adkins and Grant McCray were mixed with an Alverson Arteaga double and a wild pitch to stretch the lead to 10-2. Dues capped off the scoring with an RBI groundout in the seventh as the Cubs fell 11-2.

With just five hits, you can see why runs were hard to come by, but it was Owen Caissie leading the way with two hits. Alcantara was joined by Rafael Morel and Felix Stevens as those three rounded out the rest of the hits. Ismael Mean, Reggie Preciado and Yeison Santana all went hitless.