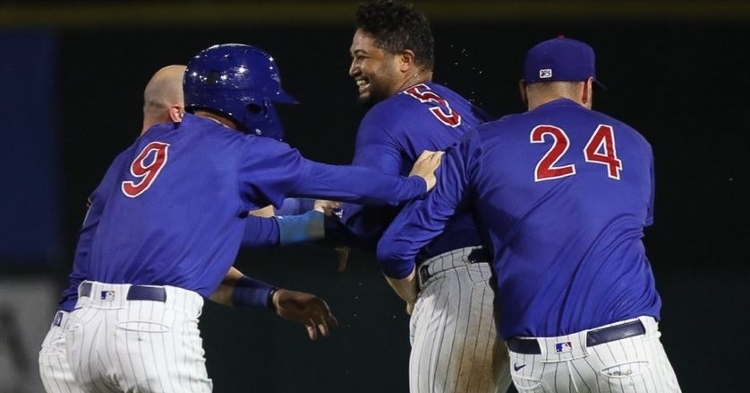 Castillo had the walk-off single (Photo via Iowa)

It wasn't easy or pretty by any means, but the Cubs farms system was able to do much better Friday night, picking up a pair of wins to go 2-2. There was two walk-off wins on the evening, one going the Cubs way and one not, so in reality, they came very close to having a 3-1 night on the diamond.

I have to give the Iowa Cubs credit for the way they have played in this series. Through four games against the best team in their division, the Cubs have played them extremely tough and have played to a 2-2 series split thus far. The second of those wins came last night as Iowa walked off Omaha for the win.

No. 15 prospect Cory Abbott got another start since returning to AAA and delivered five innings of work. Abbott was tagged for three runs on four hits and struck out five compared to two walks. He is starting to look like the 2019 version of himself when he became the first Cubs pitcher to surpass 150 minor league strikeouts in a season since 2009.

Following his departure, the Cubs mixed and matched with Ryan Meisinger, Adam Morgan, and Ben Leeper to close out the game as they held Omaha to just one hit in four innings to go with one walk and five strikeouts. Home runs were the theme early as the two sides exchanged long balls in the second. Erick Mejia was the first to go deep as his two-run shot gave Omaha a 2-0 lead. However, Nick Martini would answer in the bottom of the second with a solo shot pulling the Cubs within one.

Omaha continued to figure Abbott out in the early going, with Emmanuel Rivera connecting for an RBI double to give the Storm Chasers a 3-1 lead. That would be the last of their runs as the Cubs pitching started to settle in and gave the offense a chance to come back. That they did in the bottom of the sixth with Taylor Gushue picking up an RBI single to pull within 3-2, only to have Michael Hermosillo tie the game up on a wild pitch.

With the game still tied and in the bottom of the ninth, Alfonso Rivas kept the inning alive, picking up a two-out single to extend the game. Ian Miller was then intentionally walked, setting the stage for Erick Castillo. The catcher certainly didn't disappoint as he lined one up the middle for a single, capping off the Cubs 4-3 walk-off win.

Along with Castillo, Gushue, and Martini, the Cubs only recorded three other hits, with Dee Strange-Gordon, Rivas, and Miller grabbing those hits. Hermosillo and Trent Giambrone were held hitless, but both continue to hit the ball well this season.

While the Iowa Cubs were on the right side of a walk-off win, Tennessee was not as the Braves were able to break a tie game in the ninth to walk them off 4-3. After a rough start to his 2021 season, Javier Assad is starting to put together a string of good starts. Even though he allowed three runs in four innings of work, his ERA remains at 4.56 as he struck out six hitters in a no-decision.

Offensively, the Smokies were able to score first using a Tyler Payne RBI groundout to jump in front 1-0. However, Mississippi wasted no time tying things up in the second when Carlos Martinez connected for his first double of the season to make things 1-1. One inning later saw Braden Shewmake connect for an RBI double of his own, putting Tennessee in a 3-1 hole.

That was the brunt of the offense for quite a while as the score remained 3-1, heading to the seventh. In the seventh, Tennessee pulled a bit closer using a Nelson Maldonado homer to make things 3-2. Two innings later saw Connor Myers connect with an RBI single as the Smokies tied things up 3-3 in the ninth. With Cayne Ueckert on in relief and looking to send the game to extras, Mississippi got the last laugh as Martinez connected for a solo homer with one out to walk off the Smokies 4-3.

The Smokies outhit the Braves 8-7, but that was primarily due to Maldonado going 3-3 with his homer. Darius Hill added a pair from the leadoff spot, with Myers adding two from the bottom of the order. Carlos Sepulveda picked up the final hit, with Brennen Davis and Chase Strumpf going hitless in the loss.

In what was a great game early, South Bend used a five-run seventh inning to bust the game wide open before cruising to the win. Things have been a rough go as of late for starter Ryan Jensen, and once again, he had a rough outing. Despite two walks and seven strikeouts in four innings, Jensen allowed four runs on six hits as his ERA stands at 7.11.

Fortunately for South Bend, their offense backed him with plenty of support while the bullpen put together a great showing of their own as Joe Nahas and Eury Ramos gave South Bend five innings of one-run ball out of the pen. Nelson Velazquez ended a long homer-less drought in the first inning as his seventh shot of the season gave South Bend an early 2-0 lead.

Fort Wayne not only responded, but responded in a big way as they took the lead in the third. After an RBI groundout got the Tin Caps on the board in the second, Reinaldo Ilarraza tied the game up 2-2 in the third using a solo shot to do that. Add in a Grant Little sacrifice fly and Adam Kerner double, and suddenly the Cubs were down 4-2.

Fortunately for South Bend, the home run ball was part of their game as they have been towards the bottom of the league all season. Velazquez connected for his second homer of the game making things 4-3. That was followed by Matt Warkentin and his first homer as the Cubs retook the lead 5-4. Still holding a one-run lead in the seventh, the Cubs knew any additional runs would be good for a bullpen who struggled this season.

Leave that to Delvin Zinn, who hit the fourth homer of the night for South Bend, pushing the Cubs lead to 6-4. That homer proved to be the winning run, but the Cubs were not done. In total, South Bend pushed across five runs in the seventh inning off a pair of Fort Wayne errors, giving them a 10-4 lead late. Kelvin Alarcon added an RBI single or the Tin Caps in the eight, but Ramos shut the door from there, giving South Bend a 10-5 win.

Velazquez set the tone offensively as he hit two home runs in the game. Jake Slaughter was also responsible for two hits in the win, with Zinn, Bradlee Beesley, Yonathan Perlaza, and Warkentin picking up the remaining hits.

After winning the first two games of the series, the Pelicans have cooled off as things are now tied 2-2 following the Fireflies 6-2 win last night. Richard Gallardo continues to go through his bumps and bruises as a starter. The 19-year-old international free agent lasted 4 2/3 innings, but was charged with five runs (4 earned) in another rough outing.

Most of those runs came in the first two innings as Gallardo had a tough time settling in. Columbia pushed across a pair of first-inning runs off singles by Kale Emshoff and Brady McConnell before adding two more in the second off Maikel Garcia's single and the Herard Gonzalez double.

Fortunately for the Pelicans, they had some early offense of their own, using a Luis Verdugo second-inning single to not only put them on the board, but to tie things up 2-2 in the early going before falling behind again 4-2. Still early in the game, Myrtle Beach felt as if this would be one of those back-and-forth types of games.

That was not the case, as the Pelicans could not push across another run the rest of the way. Gonzalez added another RBI hit in the fifth before a wild pitch pushed home the sixth and final Columbia run in a 6-2 win for the Fireflies. Myrtle Beach was held to just five hits, with Ryan Reynolds leading the way with two. Verdugo picked up a pair of RBIs with his hit as he was joined by Yohendrick Pinango and Jordan Nwogu in the hit category.

Ed Howard endured another hitless night, but he was not alone as Jonathan Sierra, Pablo Aliendo, Flemin Bautista, and Matt Mervis all went hitless. Jose Almonte made his season debut for the Pelicans and treated them with a scoreless inning of relief.

Final in game four. We’ll be back tomorrow. #MBPelicans pic.twitter.com/dvxnC5R98l