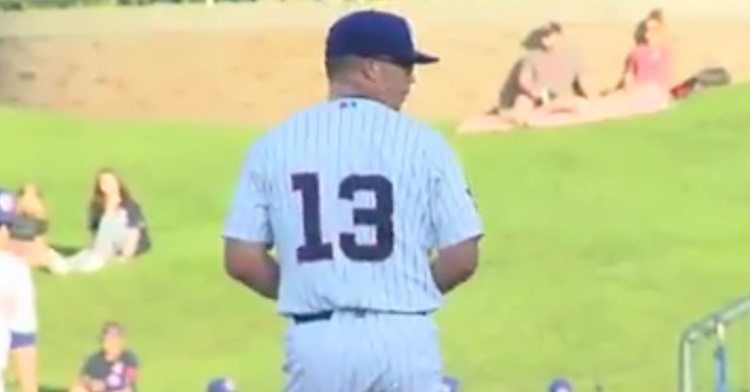 Wick was the Cubs first round pick

Sunday is one of two days where the full-season Leagues take center stage, which is exactly what they did yesterday. With all four teams in action covering five games, there was not only plenty to watch, but plenty of fun to go around.

Even with a 2-3 record to end their week, the Cubs organization had to like what they saw from many players who continue to step up as the season has gone on. That has been one of the few bright spots in the system, as the records haven't been where they had hoped they would be.

The Cubs used a complete-game effort to top the Indians in game one, downing them 9-0. Joe Biagini got the start and nearly went the distance, giving the Cubs 6 2/3 shutout innings, allowing four hits and eight strikeouts. He did walk four hitters, but the Cubs couldn't have asked for a better outing outside of that.

Offensively, things were mostly quiet until late in the game as Taylor Gushue put the Cubs in front for good in the second with a two-run homer before the Abiatal Avelino double extended the lead to 3-0 in the third. In the sixth, the Cubs put the game away as they managed to score six times in that inning to build a 9-0 lead.

Johneshwy Fargas took a bases-loaded walk for the first run before Trayce Thompson cleared the bases with an RBI double to give the Cubs a 7-0 lead. Avelino followed that up with his ninth homer of the season to cap off the scoring in the Cubs 9-0 win. Gushue led the way for the offense going a perfect 4-4 with his two-run shot.

Taylor Gushue is your @EMCInsurance Player of the Game, going 4-for-4 today including this two-run shot to get the scoring started. pic.twitter.com/zftWTxTpOZ

Trent Giambrone joined Avelino with two hits as Avelino and Thompson each had three RBIs in the win.

We earned the series split by shutting out Indianapolis in game two! Headed back home for six games against Toledo starting on Tuesday. pic.twitter.com/L3D1bJEMA8

The Cubs came one inning short of a doubleheader sweep as the Indians plated three runs in the seventh to walk them off 4-3. Once again, the Cubs got a strong pitching performance, with Matt Swarmer getting in on the fun. In his 5 2/3 innings, Swarmer allowed next to nothing surrendering one run on three hits to go with six punchouts. He gave way to Juan Gamez and Brendon Little, who couldn't hold down the fort.

For the second time in the day, the Cubs scored first as they pushed all their runs across in the second inning. Giambrone got the party started with an RBI double before coming home on the two-run Ian Miller triple, and just like that, and the Cubs had a 3-0 lead. The Indians got one of those runs back in the third off the Bligh Madris single, but it wasn't until the seventh when Indianapolis broke through.

With Gamez struggling with his command, the Cubs called on Little, who immediately walked Madris to push home a run. Several pitches later, it was Christian Bethancourt coming through in a big way as his single walked off the Cubs 4-3, handing them a doubleheader split. The Cubs compiled just five hits in game two, with Greg Deichmann, Erick Castillo, and Tyler Ladendorf joining Miller and Giambrone.

Indy scored three runs in the final inning to get the win. Game two starts in 30 minutes! pic.twitter.com/37THIYElfn

It has been over a week since the Smokies won a game, but that came to an end Sunday with a 4-2 win in extras. A big reason for the lack of victories was a COVID shutdown, as the Smokies had to cancel six games over the last two weeks. Strong pitching was the theme yesterday, and Anderson Espinoza delivered in his first AA start. The righty went five innings allowing just one run on three hits to go with six punchouts.

That run came in the second inning when Luis Aviles used a sacrifice fly to push home the game's first run and put the Trash Pandas in front 1-0. That would be their only lead of the day as the Smokies responded with a pair of runs in the fourth to take a 2-1 lead. The first of those runs came off the bat of Brennen Davis as he ripped a line drive over the left-field fence for his 12th homer of the season.

Later that inning saw Edwin Figuera cash in with an RBI single putting the Smokies on top 2-1.

With Bryan King on in relief of Espinoza, the Trash Pandas managed to tie things up in the bottom of the seventh as Mitch Nay connected for another double, pushing his season total to 18. That would be all the Smokies would allow as Graham Lawson and Scott Kobos took care of the Trash Pandas in the final three innings.

As the game shifted to extras, the Smokies had an opportunity to score, and the recently promoted Harrison Wenson came through. His RBI single not only brought home the winning run, but two runs as the Cubs took care of Rocket City 4-2. Of the seven hits, Davis led the way as the lone Smokies with a multi-hit game. He was joined by Christopher Morel, Wenson, Grayson Byrd, Figuera, and Delvin Zinn, who all hits.

The best pitching performance of the day came in South Bend, where runs were hard to come by. Not only that, but the two teams combined for just five hits, with the Captains getting the one run they needed in a 1-0 win. It was the long-awaited season debut for 2021 first-round pick Jordan Wicks who got the start and tossed one scoreless inning with a strikeout.

Last night was @jordan_wicks99 professional debut, and the Chicago Cubs first round pick threw a 1-2-3 inning, including his first career strikeout. The start of a great career begins at Four Winds Field!#CubTogether pic.twitter.com/33QsPMOArg

1-2-3 and just like that Jordan Wicks has made a fantastic professional debut ?????? @jordan_wicks99 pic.twitter.com/qwJOV2NW0F

He gave way to Chris Clarke, who, despite taking the loss, looked as good as he has this season. Clarke gave the Cubs six innings out of the pen, allowing just one run on three hits to go with five strikeouts. His ERA fell to 4.30 on the season, but is primarily inflated due to one bad start.

Neither side could get anything going from an offensive side for most of the game, with the Yonathan Perlaza fifth inning double the Cubs lone baserunner to land in scoring position until late. It took seven innings for someone to breakthrough, and that was the Captains as Aaron Branch connected for his seventh homer giving the Captains a 1-0 lead.

Looking to tie things up in the ninth inning, the Cubs had their best scoring chance of the day, which all started with a leadoff Yohendrick Pinango single.

Alexander Canario worked a walk with one down, moving the tying run to second and putting the winning run on first. Unfortunately, that was as close as the Cubs would get with Bryce Ball and Jake Slaughter not getting the job done.

The one game that wasn't decided with pitching came in Low -A where the Hillcats split the series with the Pelicans following a 10-2 win. Ironically, pitching set the tone early as eight Hillcats runs came in the final three innings. Making his first start for Myrtle Beach was Porter Hodge, who started seven games in the ACL. Hodge gave Myrtle Beach 4 2/3 solid innings allowing just two runs (one earned) while striking out four.

Those runs came in the second and fourth innings, where Jorge Burgos grounded out to give the Hillcats a 1-0 lead in the second before he used his legs in the fourth to steal home, doubling the lead 2-0. Myrtle Beach wasted little time tying things back up as they responded with two runs in the bottom of the fourth to pull even. Kevin Made continued his month-long hot streak with an RBI double to put the Pelicans on the board before Owen Caissie tied things up with a double play that pushed in a run.

That score would hold up until the seventh when Lynchburg started to get to Dawel Rodriguez. After a scoreless 2 1/3 innings to begin his outing, Rodriguez lost it in the seventh and eighth as he was charged with five earned runs over those innings. The first two proved to be the difference in the game, with Alexfri Planes going deep for the 15th time this season and the third time this series to put the Hillcats in front for good 4-2.

They responded with four more runs in the eighth, three of them charged to Rodriguez as RBI singles from Milan Tolentino, Petey Halpin, and Gabriel

Rodriguez had the Hillcats comfortably in front 8-2. Add in two more RBI singles by Andres Melendrez and Tolentino off Walker Powell in the ninth, and they closed out the game with eight unanswered runs to win 10-2.

We’ll be in Charleston next week for the final road trip of the year. #MBPelicans pic.twitter.com/438kcWfAyx

With just five hits, runs are hard to come by, but Jordan Nwogu remained hot, collecting two more hits and raising his average to .251. Ed Howard, Made, and Caissie added the remaining hits in what was a quiet day.