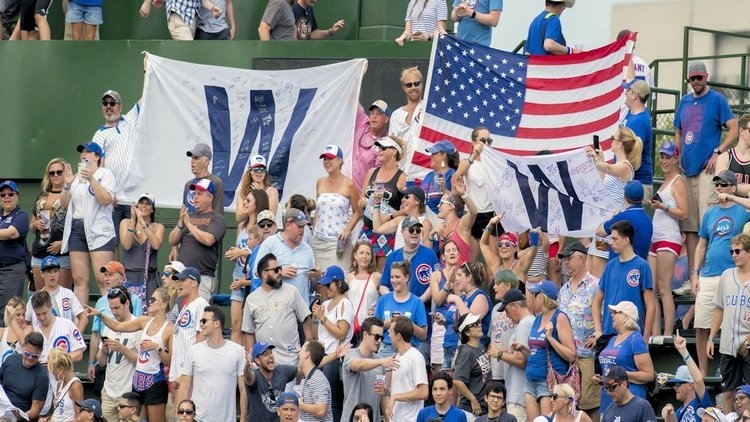 Monday was filled with fireworks as the Rookie League teams brought the offense and came to play. Apart from DSL Blue, who managed to score just one run in 11 innings, the other two teams more than made up for that as they combined for 26 runs between them.

Even with that offensive explosion, the Cubs still struggled to win games as their pitching gave up 25 runs on the night also. That led them to a 1-2 record on the farm, but it was a fun 1-2.

The lone win of the night came in the ACL, where the Cubs brought the Boomsticks to the park topping the Brewers 16-13. After the Cubs pitching allowed 13 runs in less than six innings, the duo of Rony Baez and John Oquendo held the Brewers right there as the Cubs managed to win a slugfest 16-13.

The Cubs more than did their share of scoring in the first as Andy Weber continues his rehab assignment by picking up an RBI single. With two on, Kevin Alcantara ripped his first double of the season to bring the lead to 3-0 ahead of Bryce Windham, and his RBI groundout as the Cubs led 4-0. While a big league is nice, it doesn't matter if the pitching isn't up to the task as the Brewers offense busted out in their own way in the bottom of the first.

As if an error and a passed ball weren't bad enough, Erys Bautista and Alwinson Valdez picked up RBI hits as the Brewers stormed in front 5-4. Ismael Mena tied things up in the top second with his second homer of the season before the Brewers struck again off a Jefferson Quero triple and a Jeremy Vargas to put the Brewers back on top 7-5.

Knowing that they would need plenty more offense, Juan Mora went deep in grand fashion as his grand slam not only put the Cubs in front 9-7, but it was his first homer of the season. That homer was followed by Owen Caissie and his fourth-inning shot as the Cubs were in front 11-8 before Valdez doubled home another run to pull within 11-9.

Despite a pair of four-run innings already in the game, the Cubs used a five-run sixth to put the game away. That all started with a throwing error that was followed by Alcantara and another RBI hit. Add in bases-loaded walks from Mora and Rafael Herrera combined with a Mena sacrifice fly, and the Cubs were in charge 16-9.

The Brewers did their best to keep things close in the bottom of the sixth as Quero and Vargas picked up RBI groundouts before a Luis Silva RBI single had things within 16-13. Those would be the game's final runs as the Cubs managed to keep the Brewers off the board for the final three innings to preserve the win.

Mena, Mora, Caissie, Alcantara, and Reggie Preciado had good days offensively as they led the way with two hits. Weber and Wyndham rounded out the hits for the Cubs, while Yeison Santana went 0-1 off the bench.

It was one of the rare times that the DSL Blue team had great pitching. Still, it wasn't enough as the Rangers were able to walk them off 2-1 in 11 innings. Led by six pitchers, the Cubs held the Rangers to just nine hits before getting walked off in the end.

It may have taken four innings for someone to breakthrough, but it was the Rangers cashing in first as a wild pitch gave them a 1-0 lead. That score held up for nine innings when the Cubs were finally able to breakthrough. Lizardo Ruiz picked up a single to keep the inning moving with two outs, but Ezequiel Alvarez came through with the biggest hit as his RBI triple tied things up 1-1.

Two innings later saw the Rangers get the last laugh as Glider Figuero rolled a ground ball into to right field and capped off the 2-1 walk-off win for the Rangers. With just three hits, there wasn't a ton to get excited about as Alvarez (2) and Ruiz collected all three hits in the loss. Cristian Hernandez suffered a hitless day but did manage to take a pair of walks.

While the first of the DSL games focused on pitching, the other one was all about offense as the Rangers and Cubs combined for 23 runs. Unfortunately for the Cubs, they were on the losing end yet again, falling 13-10. Offensively, the Cubs got off to a roaring start as they scored in each of the first four innings with one run in each.

Brayan Altuve opened the scoring with an RBI groundout in the first, before Starlin Mateo went deep for his first homer of the season and 2-0 lead. Another Altuve groundout in the third, followed by an Andrews Cruz single, had the Cubs rolling 4-0 after four innings of play. The fifth inning is where the Rangers started to get things going as they pulled within 4-3 following a Jefferson Tineo triple, Keiderson Pavon single, and a wild pitch.

Off the strength of a balk and an Anderson Suriel RBI single, the Cubs were able to get two of those runs back to make things 6-3. That was when things began to change in a big way as the Rangers busted things wide open in the sixth after pushing across eight runs to make things 11-6. Pedro Ramirez did his best to keep things close as his grand slam had the Cubs within 11-10 in the sixth.

Unfortunately for the Cubs, that would be as close as things would get as the Rangers picked up a pair of runs in the seventh to take a 13-10 win and won by that score. With his Grand Slam, Ramirez continues his impressive season as he collected three hits to raise his average to .357. Moises Ballesteros, Suriel, and Mateo all added multi-hit games, while Cruz added the final hit of the game.