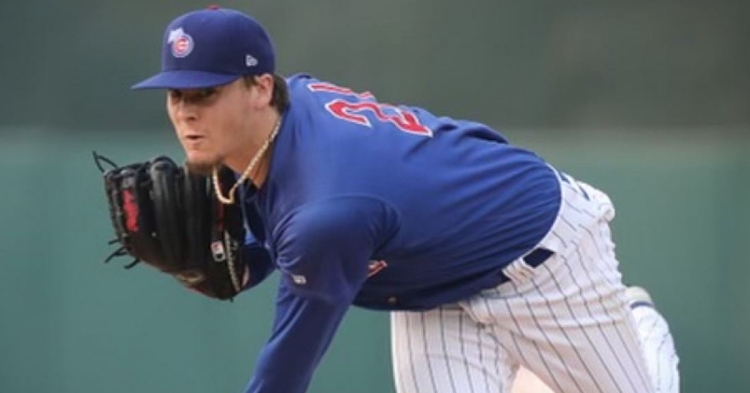 Thursday was a jam-packed night on the farm, with all seven teams in action compiling a total of eight games. While the results may not have been what the organization was looking for going 3-5, the pitching stood out as several strong pitching performances were in full swing.

Talk about a difference of 24 hours. After allowing 17 runs on Wednesday, Justin Steele and the Iowa Cubs cooled off the Bats, topping them 2-0. Steele continues to work up his pitch count as he works his way to the starting rotation giving the Cubs five shutout innings with five punchouts in the win. He gave way to Ryan Meisinger, Tony Cingrani, and Ben Leeper, who kept the Bats off the board.

Not only were runs hard to come by, but both Cubs runs came in the fifth inning when Frank Schwindel picked up a two-run single give the Cubs the 2-0 lead. That would be all they would need as the pitching took care of everything else. Andrew Romine, Abiatal Avelino, and Johneshwy Fargas paced the Cubs offense with two hits, while Schwindel, Ian Miller, and recently acquired Greg Deichmann all had one hit.

Back in the win column! pic.twitter.com/3Bk91gauwS

As if one strong pitching performance wasn't enough, why not make it two as Tennessee out-dueled the Lookouts 2-1. Luis Lugo delivered a fine start as he earned the win going five innings and allowing one run on five hits with six punchouts. He gave way to Brendon Little, who struck out four in 2 2/3 innings of work, and Ethan Roberts, who secured his fourth save and lowered his ERA to 2.03.

Although the offense was at a premium, both teams seemed to be dialed in early, with Cam Balego giving the Smokies a 1-0 lead in the first with an RBI single. Two innings later saw the Lookouts tie things up with Yoel Yanqui connecting for an RBI double, making things 1-1. The bottom half of the third saw the Smokies take the lead for good as a wild pitch pushed home the winning run in a 2-1 Tennessee win.

The one team where pitching struggled happened to be the South Bend Cubs as they were blitzed by Quad Cities 11-4. Making his first start of the season, Blake Whitney was rocked, surrendering six runs in just two innings of work and putting his team in a huge hole.

All six of those runs came off two hits, with Seuly Matias hitting a three-run shot in the first ahead of a Nathan Eaton bases-loaded double in the second for the early 6-0 lead. Quad Cities was able to stretch their lead to 8-0 in the third with Matias picking up his second homer of the game while William Hancock added a sacrifice fly.

Not willing to give up quite yet, the Cubs tried to make interesting in the fourth as they pushed across all three of their runs. Jake Washer got things started with an RBI groundout before a Scott McKeon single, and Delvin Zinn double made things 8-3. That would be as close as things would get, with John Rave picking up a solo homer in the fourth ahead of RBI singles by Gavin Stupienski and Maikel Garcia later in the game capped off the scoring.

The Cubs had 10 hits, with McKeon, Jake Slaughter, D.J. Artis, and Bryce Ball accounting for eight hits. Yonathan Perlaza and Zinn added the final two hits as they couldn't push across more runs. Nelson Velazquez suffered another hitless night as his struggles continue.

Went through the fire (delay) but couldn't come out on top. Back at it tomorrow. pic.twitter.com/9UtdNmGcLl

The Pelicans go about their business as they used three separate three-run innings to move closer to .500. Didier Vargas labored through four innings, but did enough to keep things close as the offense and bullpen picked him up late.

The Pelicans offense came out swinging in the first as Matt Warkentin cleared the bases with a bases-loaded double for a quick 3-0 lead. Vargas tried to give the early advantage right back in the bottom of the first as he surrendered a bases-loaded walk and a Victor De Hoyos single to make things 3-2. Two innings later saw Augusta grab their first and only lead of the night, with Bryson Horne tying things up with a homer before Brandon Parker gave Augusta a 4-3 lead.

The rest of the game was all Myrtle Beach, who closed out the night with six unanswered runs. Three of those came in the fourth, with Warkentin connecting for a solo shot ahead of Ezequiel Pagan's first homer to make things 6-4. The Pelicans would add three more runs in the ninth off doubles by Jordan Nwogu and Luis Verdugo, while Pablo Aliendo capped off the scoring with an RBI single in the Pelicans 9-4 win.

Of the 13 hits, both Verdugo and Pagan paced the offense with three each, but they were not alone. Nwogu, Yohendrick Pinango, and Warkentin all added multi-hit games, with Warkentin having a career night with four RBIs. Aliendo added the final hit while Kevin Made and Jonathan Sierra went hitless.

In a make-up of the July 23rd rainout, the Giants made quick work of the Cubs, topping them 4-0. Despite getting charged with two runs in three innings, Johzan Oquendo lowered his ERA to 0.75, as both of those runs were unearned. Unfortunately, those runs were too much as the Cubs offense was held in check.

Not only did the Giants grab the lead in the second on an error, but they added to it in the third with a second error as they built an early 2-0 lead. They would then tack on two more runs in the sixth off the Dilan Rosario RBI triple and Tyler Forner groundout as they cruised 4-0. Malcom and Ronnier Quintero led the way with two hits.

In their second scheduled game of the day, pitching once again dominated things as the Cubs suffered a tough-luck 1-0 defeat. Yovanny Cabrera was the big story of the day as he not only gave the Cubs five strong innings but five perfect innings as he struck out seven in the process.

He single-handedly kept the Cubs in the game until Yorlis Rodriguez picked up the game-winning RBI double in the seventh to hand the Giants a 1-0 win. The Cubs collected just three hits in the loss, with Yeison Santana, Owen Caissie, and Matt Burch grabbing the hits. Ismael Mena continues to struggle, going hitless again, dropping his average to .167.

There was a trend in the Rookie League games as the pitching was impressive with hitting less than impressive. Led by Cristian Rojas and Samuel Rodriguez, the Cubs were able to keep the Pirates hitless through five innings as fans were treated to an old-fashioned pitchers duel.

The shutout continued until the seventh inning, when the Pirates pushed across all three of their runs. The first two came from a Ruben Vizcaya single before the Shalin Polanco single capped off the scoring in the 3-0 loss. The Cubs collected just two hits, with Joanfran Rojas and Raul Guzman grabbing the hits.

Despite scoring more runs than the rest of the Rookie League teams combined, the Giants proved to be the Cubs kryptonite topping them 5-3. To make matters worse, the Cubs scored all three of their runs in the first inning before going quiet the rest of the way.

Anderson Suriel continued his recent hot stretch at the plate, collecting an RBI double to give the Cubs a 2-0 lead. Suriel would later come around to score on the Samuel Duarte single as the Cubs built an early 3-0 lead. It was all Giants from there, as they not only pulled within 3-2 in the second, but ended the game with five unanswered runs to claim the victory.

Diego Verbel opened the scoring for the Giants with an RBI single before the Jose Ramos groundout made things 3-2. The Giants pulled even in the fifth off a Jose Astudillo groundout before a costly error put the Giants in front for good. Verbal capped off the scoring with a sixth-inning sacrifice fly as the Giants picked up a 5-3 win.

With just six hits, the Cubs did what they could with those hits as Pedro Ramirez led the way with two hits. Cristian More, Suriel, Duarte, and Andrews Cruz added the rest of the hits.