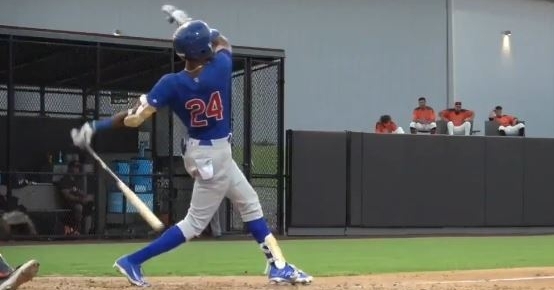 Kevin Alcantara is a very promising prospect for the Cubs

Although Minor League baseball takes place every day, much like Major League baseball, Monday remains the day for rookie league ball. With the full-season league using Monday as a travel day, the Rookie League took center stage as this is their day to be the center of attention.

The only difference becomes how difficult it is to watch the games. Unlike full-season leagues, the Rookie league teams don't have TV rights, and the overall streaming ability of those leagues is far less superior. Either way, there are plenty of good names in the Rookie League circuit, especially in Arizona, where the ACL Cubs reside.

As good as the ACL Cubs have been (19-16), things haven't been as good lately, and that followed suit with an 8-1 loss to the ACL Giants (19-16). Unlike most games where the offense has carried this team, it was one of the things that let them down on Monday as they mustered just one run on three hits.

Besides that, pitching was not at its best, but more so the relief pitching where they gave up five runs in the eighth inning to take away any chance of a comeback. Luis Devers got the start once again and continues to pitch consistent outings on the mound. Although he allowed three runs on five hits in three innings of work, he was able to settle in and finish his start with a 3.98 ERA.

All three runs allowed by Devers came in the first inning, where the Giants offense got off to a rolling start. Unlike most of his starts where the command was his undoing, hard contact proved to be the issue here, with Alverson Arteaga connecting for an RBI triple three batters in for the 1-0 lead. One batter later saw Garrett Frechette cash in with the game-winning hit as an RBI single put the Giants in front 2-0. Anthony Rodriguez added to that lead with another RBI single as the Giants held a 3-0 lead.

Although there were still eight innings left in the game, that three-run cushion was plenty for Sonny Vargas, who delivered his best outing of the season. In five innings, the Giants starter was highly efficient, allowing one run on two hits while striking out five. He turned things over to Luis Moreno and Jesus Gomez, who allowed one hit with six strikeouts over the final four frames.

With Devers now out of the game, Angel Hernandez entered in relief and delivered an impressive performance. He not only gave the Cubs three innings, but three scoreless innings to go with one hit while striking out six. He kept the Cubs in the game and gave them a chance to get something going offensively.

The top of the fourth is when the Cubs were finally able to cash in using the long ball as the culprit. Kevin Alcantara continues to be an excellent addition to this team connecting for his third homer to cut the lead to 3-1. Since coming over in the Anthony Rizzo deal, all Alcantara has done is hit while displaying plenty of power in the process. Little did the Cubs know that his home would be their lone run as they couldn't get anything going offensively.

Still trailing by that 3-1 score, the Cubs saw their comeback effort come to a crashing halt in the eighth as the Giants offense erupted for a big inning. The Cubs did themselves no favors with a wild pitch and two bases-loaded walks contributing to three runs, but the Giants offense wasn't done putting runs on the board.

Adrian Sugastey would later add an RBI on a force out play while a second wild pitch pushed the lead to 8-1 with five runs coming across to score. That would be all the offense the Giants would need as the Cubs were retired in order in the ninth, sealing their fate in the 8-1 loss. The offense was hard to come by with just three hits as Alcantara provided the lone RBI with his homer.

Miguel Fabrizio and Casey Opitz recorded the other two hits as the 2021 eighth rounder made his season and MLB debut Monday afternoon. Not only did Yeison Santana, Owen Caissie, and Reggie Preciado go hitless on the evening, but they combined for seven strikeouts with no walks in what was a long night at the plate. Fellow 2021 draft picks BJ Murray Jr., and Christian Franklin made their season debuts and suffered hitless nights.