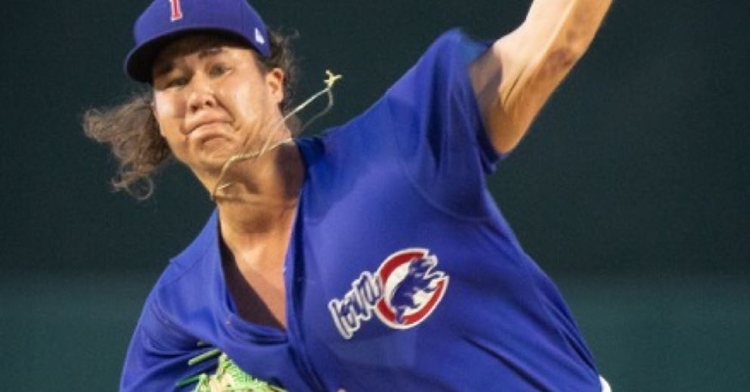 Wednesday had a bit of a lighter side of things in minor league baseball as only three teams were in action. Those three teams certainly came to play as every game was close and very well played, making it a fun night for fans across the country.

For those who care about the results more than the development of players, the Cubs played excellent on Wednesday, posting a 2-1 record on the night. To make things better, tons of their prospects continue to show up as this team builds and plans for the future.

As tough a season as it has been for Iowa, they are playing much better ball over the last two weeks, and pitching has been a big reason why. With Luis Lugo making just his third start with Iowa, the left-hander delivered a great outing as he picked up his first AAA win and improved to 6-5 on the season. Lugo was lights out from start to finish allowing just one run on two hits with a pair of strikeouts. He gave way to Ethan Roberts Juan Gamez as they managed to hold off the Indians in the win.

Iowa opened the scoring in the first inning with Trayce Thompson picking up an RBI groundout for the quick 1-0 lead. Hunter Owen wasted little time tying things up, connecting for his 15th homer off Lugo in the bottom of the second, helping the Indians pull even 1-1. One inning later saw the Cubs take the lead for good as Thompson was in the middle of the action yet again with an RBI double, putting Iowa up 2-1.

Over the next five innings, runs and hits were hard to come by as the Cubs held a 2-1 lead heading into the eighth inning. That was until

class='logo-area utip' data-tipped-options="ajax: { data: { type: 'Player', sport: 'baseball', playerId: '407' } }">Abiatal Avelino came through with a game-winning RBI double, pushing across two more runs to extend the lead to 4-1. Those two runs proved crucial as Indianapolis not only got one of those runs back on a wild pitch, but a Diego Castillo sacrifice fly had them within 4-3 heading into the ninth before Gamez kept things right there.

Nick Martini and Tyler Ladendorf led the offense with two hits, but it was Thompson and Avelino each driving in two runs. Greg Deichmann, Thompson, Avelino, and Bryan Serra added hits in the win, with Willson Contreras going 0-3 with a walk in his second rehab game.

We got it done tonight! pic.twitter.com/W9ubVWCbpn

Unless things change throughout the day, Tennessee should be back on the field Thursday after having another game canceled due to COVID.

Back-to-back weeks of #WallPaperWednesday for you, fans! Thanks, @KNOXDOUGH! pic.twitter.com/n85jRft5gL

Despite allowing a ton of runs in the game's early stages, South Bend managed to claw back and took the lead late. Unfortunately for them, the Captains scored two runs over the final three innings, including one in the ninth to secure another win.

Alexander Vizcaino continues to impress with his high velocity since joining the Cubs system, although this wasn't one of his better starts. In four innings, the right-hander was charged with four runs on five hits, walking three and striking out two. Only three of those runs were earned, but none the less it wasn't a great start for him.

On the other hand, Bryan King was great in his three innings of work, allowing just one unearned run on two hits to go with four punchouts. He gave way to Burl Carraway, who, although allowed the game-winning run, walked one and struck out four in a strong two innings for him.

After two relatively easy innings for Vizcaino, he ran into trouble in the third, and Lake County made him pay. Not only did a fielder's choice give the Captains a 1-0 lead, but an RBI double by Jhonkensy Noel and a single by Joe Naranjo pushed the Captains lead to 4-0 and capped off a four-run frame. As bad as that inning was, those were the lone runs Vizcaino allowed as the offense had plenty of time to kick it into gear.

Credit Alexander Canario for that in the bottom of the fourth as his RBI single put the Cubs on the board and seemed to change the game's momentum. Jake Slaughter plated a run later in the inning off a double play as the Cubs cut the deficit in half 4-2. Two innings later, South Bend delivered the big blow, with Yonathan Perlaza going deep for the 12th time this season, giving South Bend the 5-4 lead.

Baseball is a game of momentum, and momentum began to swing back to Lake County in the seventh, with Jose Tena tying things up with an RBI single. As good as Carraway was in his outing, he would like to have one pitch back. That pitch led to a Julien Escobedo homer for his first of the season which gave the Captains a 6-5 lead in the ninth. The Cubs went down in order after that homer and lost by that 6-5 score.

The Cubs tallied seven hits in the game, with Perlaza leading the way with two to go with his three RBIs. Luis Vazquez, Yohendrick Pinango, Tyler Durna, Canario and Slaughter all had hits in the game. Bryce Ball suffered a hitless game at the plate, but continues to show a great eye taking two more walks.

South Bend surrenders a run in the top of the ninth for a second-straight one-run loss. pic.twitter.com/rsM0QPMpnt

Amid their 12-game homestand, the Pelicans continue to play great ball, picking up another win. The moves them to 53-51 as they remain in second place in their division. After several rough outings to begin his Myrtle Beach tenure, Tyler Schlaffer is starting to come into his own.

The right-hander picked up his second win of the season, holding the Hillcats to one run on six hits in six innings of work. Schlaffer also didn't walk a batter to go with eight punchouts as his season ERA lowers to 3.86.

He gave way to Porter Hodge and Bailey Reid as they combined to allow four hits in three innings with five strikeouts as Reid secured his seventh save, lowering his ERA to 3.69.

Offensively speaking, the Pelicans needed just one inning to not only grab the lead, but win the game as they pushed across two runs in the first. Those runs came off the bat of Jacob Wetzel as his single gave Myrtle Beach a 2-0 lead. Wetzel has been part of plenty of game-winning hits this season, but none as early as this one.

With the score still 2-0 in the fourth, the Pelicans offense was at it again as they looked to put the game away. Kevin Made continues his all-around stellar play by picking up an RBI single to push the lead to 3-0. A costly error later in the inning brought home the game's fourth run as the Hillcats were in a massive hole they couldn't climb out of.

The lone run Schlaffer allowed came in his final inning of work when Alexfri Planez connected for an RBI single to make things 4-1. That would be all the Hillcats would get as they put plenty of traffic on the bases late, but couldn't get the critical hit they needed.

The Pelicans rattled off eight hits with three players collecting a pair. Those players were Ed Howard, Casey Optiz, and Fabian Pertuz, as they led the way for the offense. Made and Wetzel combined for the other hits with all three RBIs as the Pelicans continue to play well at home.

Chicago-native @ehowardIV with his 8th double on the season.

Jordan Nwogu and Owen Caissie went hitless, but Caissie did draw two weeks as his patience from the ACL is carrying over.