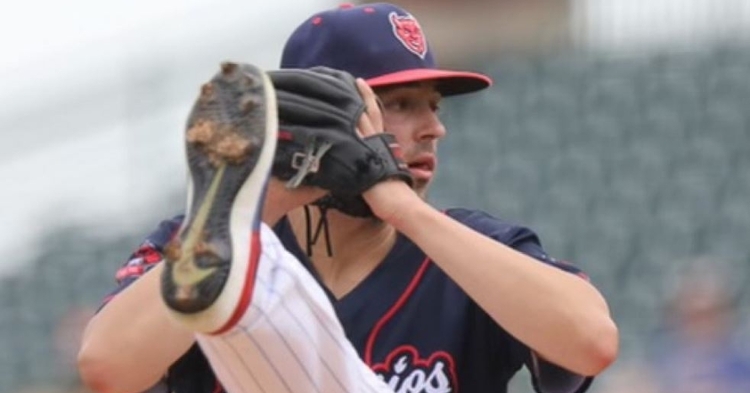 Swarmer pitched a gem in the loss (Photo via Iowa Cubs)

Sunday was a rough day for all involved in the Cubs organization, as wins were nonexistent. Not only did the Chicago Cubs get crushed 13-1 against the White Sox, but the Minor League organization struggled to find their footing suffering an 0-3 day to close out the week.

While two of those games were ugly, one of them went into extras, but in the end, winning is all that matters which didn't happen yesterday. Still, there were plenty of performances to like, as September call-ups will be something to watch this season.

As rough as things went against Omaha this week, the Cubs played a great game on Sunday, falling to the Storm Chasers in extra innings. Matt Swarmer continues this impressive run he is on going six great innings allowing just one unearned run on one hit. Swarmer walked three and struck out seven as he continues to produce since going back to the rotation full-time.

Expecting a ton of offense from the Omaha side, the Cubs were the ones scoring early as they used the Swarmer start to gain momentum. Levi Jordan gave Iowa a 1-0 lead in the bottom of the third as things were going good early. Two innings later, and it was Jared Young building on that lead with an RBI single of his own as the Cubs held a 3-0 lead.

A costly error in the seventh led to the first Omaha run with Angelo Castellanos picking up a sacrifice fly to make things 3-1. That run seemed to open the door for the Omaha offense, with Adalberto Mondesi and Kyle Isabel each hitting a solo shot in the eighth and ninth innings as the Storm Chasers rallied late to force extras. In the 11th, Bobby Witt came through with the winning run as his sacrifice fly capped off the comeback and a 4-3 Storm Chasers win.

Ian Miller continues to hit from the lead off spot grabbing two hits to join Jordan as the only players with multiple hits. Nick Martini, Young, Taylor Gushue, and Johneshwy Fargas added the other four hits for Iowa in the loss.

For the most part, this was a successful week for the Cubs, but Sunday was not one of those games. Joe Nahas had a rare rough outing where he allowed five runs in just four innings of work. In the process, his ERA rose to 3.95, but that is still a solid number for the season.

Jhon Torres continues to play longball with the Cubs this season as his first-inning homer put Peoria up 1-0. Ryan Reynolds tied things up with an RBI groundout in the top of the second before Tyler Reichenborn RBI double in the bottom of the second put Peoria up for good. Matt Chamberlin added an RBI single later in the second, with the Chiefs taking a 3-1 lead.

After a scoreless third, the Chiefs offense came to life, pushing across four runs across the fourth and fifth innings to take a commanding 7-1 lead. The Reichenborn/Chamberlin connection duplicated their second inning with the same results in the fourth, pushing the lead to 5-1 at that point. Torres added an RBI triple in the fifth before coming home on the Pedro Pages single to build a 7-1 lead.

South Bend picked up the game's final run in the seventh off a bases-loaded Bryce Windham walk, but that was in a 7-2 defeat. South Bend managed just six hits in the loss, with Windham leading the way with three. Yohendrick Pinango, Bryce Ball, and Yonathan Perlaza added the other three hits.

The Cubs drop the series finale but take the series win in Peoria. pic.twitter.com/1xMlh2Xi8J

The Pelicans have had the Fireflies number all season long, but the Pelicans had a game to forget on Sunday with Columbia pummeling them 13-4. Pitching was not the Pelicans friend on Sunday as they five arms to get through the game. Gabriel Jaramillo was the lone pitcher not to allow a run going two scoreless innings with three punchouts to bring his ERA to 2.33.

Trailing 1-0 in the bottom of the first, the Pelicans offense was alive and well as they jumped all over Heribert Garcia. Christian Franklin led the inning off with a single before advancing to third on an Ed Howard double to batters later. Jonathan Sierra followed that double up with a single as the Pelicans took a 2-1 lead. Add in singles by Peter Matt and Josue Huma, and the Pelicans capped off an impressive first inning leading 4-1.

Unfortunately, that would be all the offense the Pelicans would generate as the fireflies began their comeback attempt. With Matthew Schmidt picking up an RBI single in the second to pull within 4-2, Darryl Collins showed patience with the bases loaded, earning a walk to pull within 4-3. A Jose Marquez RBI groundout in the third tied things up 4-4, but it was the fifth where the game was flipped on its side.

Not only did the Fireflies grab the lead in that inning, but they did so in a big way pushing across six runs to make things happen. Saul Garza picked up the game-winning RBI single before a bases-loaded Burle Dixon walk had the Fireflies up 6-4. A Herard Gonzalez ground-rule double pushed the lead to 8-4 ahead of a costly error allowing two more runs to score for the 10-4 lead.

Kale Emshoff kept the momentum moving with a sixth-inning solo shot before the Fireflies capped off the scoring with a pair of bases-loaded walks in the seventh. In total, Columbia ended the game with 12 unanswered runs, which was more than enough to win 13-4. To make matters worse, the Pelicans were no-hit after the first inning, with all five of their hits coming in the first.