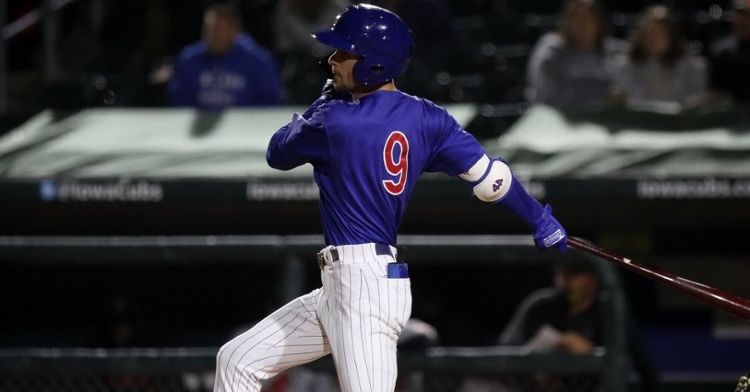 Had it not been for two games getting suspended, who knows what the Cubs record on the farm would have been. Even with two games failing to be completed, the organization still managed to put together a 3-3 on the evening.

That has been a common trend since the trade deadline, as the once depleted farm system has seen an influx of rich talent, leading to more wins. Given the position the Cubs could be in next season, more moves could be made, which could lead to more farm system success.

Saint Paul hasn't made things easy on Iowa this weekend as they picked up their third win in four games 9-4. With Keegan Thompson most likely heading back to Chicago this weekend, Matt Swarmer got another start and was hammered in six innings of work. Despite walking one and striking out six, Swarmer allowed six runs, with five of them earned. He gave way to Erich Uelmen, who surrendered three runs in two innings.

Swarmer didn't make things easy on himself or the team as he allowed RBI doubles to Mark Contreras and Gilberto Celestino in the first putting Iowa in an early 2-0 hole. Iowa finally got things going in the fourth inning offensively, with Abiatal Avelino putting the Cubs on the board with an RBI single. Later in that inning, Ian Miller continued his hot stretch as he cleared the bases with an RBI double, and just like that, Iowa stormed in front 4-2.

Unfortunately for the Cubs, that four-run inning would be all the offense they would get as the Saints closed out the game with seven unanswered runs.

Four of those runs came in the sixth inning when Drew Maggi delivered the game-winning hit in grand Fashion as his Grand Slam had Saint Paul in front 6-4. In the seventh, singles by Contreras and Sherman Johnson brought home three more runs to close out the 9-4 win.

Miller led the way on offense with two hits with two RBIs, while Alfonso Rivas, Nick Martini, Avelino, and Trent Giambrone all had hits. Greg Deichmann had a rough night in the leadoff spot, going 0-5 with four strikeouts.

In game one of what will be two-weekend doubleheaders, the Smokies received a fantastic pitching performance from Javier Assad to pick up the win. The righty not only got into the sixth inning for just the second time this season but lasted 6 1/3 innings allowing just one run on five hits to go with four strikeouts.

Offensively, the Cubs needed just two-RBI hits to pick up the win as both did damage. The first of those hits came in the second inning when Tyler Payne delivered an RBI single to put the Smokies up 2-0. Little did they know his hit would be the game-winner as Assad kept Birmingham in check. One inning later saw Christopher Morel pick up his second bases-loaded double in as many nights, putting Tennessee up 5-0. Birmingham would get their lone run in the sixth off a Yolbert Sanchez single.

In a makeup of a June 6th contest, the Barons were technically the home team even though they played at Tennessee. Unlike game one, pitching was not as sharp, with Wyatt Short, Samuel Reyes, and Eury Ramos all allowing two earned runs in two or more innings of work.

Tennessee did their best early in the game, with Morel continuing his great series by belting his 14th homer to give the Smokies a 1-0 lead in the second. Sanchez answered that homer with a homer of his own in the third to tie things up before a Joe DeCarlo grounder in the fourth put Birmingham up 2-1. The home run ball continued to be valuable for Tennessee, with Carlos Sepulveda going deep for the second time in the fifth, putting the Smokies back on top 3-2.

Brennen Davis oppo pop off the wall like his life depends on it pic.twitter.com/rKLz91b149

That lead was short-lived asYoelqui Cespedes picked up his first triple of the season to tie the game up 3-3. A Lenin Sosa double later in the inning saw Birmingham take a 4-3 lead before extending that to 6-3 in the sixth off a Romy Gonzalez homer. Down by three in the seventh, Tennessee made things interesting as a Nelson Velazquez RBI single cut the deficit to 6-5. The only problem, Velazquez was thrown out trying to stretch that single into a double, and Tennessee earned a split with Birmingham.

Smokies split today’s Double Header against the Barons. We are back at it tomorrow inside Smokies Stadium! See you there. #SmokiesBaseball #GoSmokies pic.twitter.com/myS18993dU

SOUTH BEND CUBS vs. QUAD CITIES RIVER BANDITS (Suspended with bases loaded in the top of the third and no score).

GAME UPDATE
Thursday night's game was suspended in the top of the third inning and will resume tomorrow at 5:05 pm ET. Tickets for Thursday night's game can be exchanged at the Four Winds Field Box Office for any remaining home game.
Full details: https://t.co/4q84xiDfuM pic.twitter.com/TsCGD2d978

Update from Fayetteville: tonight’s game has been suspended. Play will resume at 4:30 tomorrow with a 7-inning game following.

The best part of the Arizona Complex League is watching the ball fly all over the yard. That was exactly the case on Thursday when the Cubs won an offensive thriller over the Giants 12-11. It is the kind of performance you expect from this offense, and when it happens, they are fun to watch.

Trailing 1-0 in the second after the Giants struck first, Felix Stevens put the Cubs in front with a two-run shot for his fourth homer of the season. A Reggie Preciado single later in the inning had the Cubs in front 3-1, only to see the Giants pull even in the bottom half of the inning with Jean Pena connecting for a home of his own.

One inning later saw both teams come out strong offensively as they each pushed across five runs to remain tied 8-8 after three. For the Cubs, it was Rafael Morel providing the big blow of that inning, connecting for his second homer of the season in what was a grand slam. James Triantos added an RBI single a few batters later to put the Cubs in front 8-3 at that point.

Although the Giants didn't display the same power approach the Cubs did, they managed to push across five runs of their own in the third using singles by Jared Dupere and Pena, mixed with a Max Wright RBI double and the Jacob Gonzalez sacrifice fly. The Giants offense continued to roll as they eventually scored eight unanswered runs to take an 11-8 lead. A Dilan Rosario double and Pena singled in the fifth put them in front 10-8 before Gonzalez homered in the sixth to put them up 11-8.

That would be all they could do offensively as it was the Cubs time to mount a rally. Trailing by three in the eighth, Kevin Alcantara collected an RBI single to pull within two before a Chrisitan Franklin single had them within 11-10. One inning later saw Triantos come through with his biggest hit as a pro going deep for the first time this season to lift the Cubs to a 12-11 win.

Triantos was one of three players with three hits to go with his three RBIs as he joined Franklin and Morel. Preciado added two hits from the leadoff spot, with Malcom Quintero the lone starter without a hit.

Thursday was another painful loss for DSL Blue as they rallied back from an early deficit only to get walked off in the end. The Cubs saw the Royals build an early 3-0 lead in the first as a pair of wild pitches aided their offense before the Osman Bravo single pushed things to 3-0.

The rest of the game saw the Cubs pitching settle in while they began to chip away at their lead. Over the next two innings, the Cubs pulled within 3-2 as Wally Soto went deep in the second ahead of a third-inning error. The Cubs continued their comeback effort in the fifth when the Royals returned the favor of early wild pitches with a wild pitch of their own to even things up 3-3.

That score held until the ninth inning when the Royals had the last laugh as Jorge Morales connected for an RBI single and walked off the Cubs 4-3. Not only did Soto hit his first homer, but he was credited with two of the team's four hits to go with the lone RBI. Joanfran Rojas added the other two hits in what was a quiet night at the plate for most hitters. Cristian Hernandez went hitless with a pair of punchouts.

Although wins have been hard to come by for DSL Red this season, it was nice to see pitching steal the show for once as they moved to 9-16 on the season. Enmanuel De La Cruz got the start and gave the Cubs four innings of one-run ball to set the tone for the day. His ERA sits at 2.20 for the season as he continues to pitch well.

The lone run he allowed came in his final inning as Cristian Santana connected for his fifth homer of the summer, putting the Tigers in front 1-0. Not only did that lead not last long, but once the Cubs grabbed the lead, they didn't look back, pushing across a pair of runs in the sixth. The first of those runs came on a double steal where Pedro Ramirez was able to steal home to tie things up. Later in that frame, Brayan Altuve added an RBI single to put the Cubs in front for good 2-1.

In the seventh, Samuel Duarte came through with a huge insurance run as his RBI double not only put the Cubs in front 3-1 but proved to be the winning hit in the process. In the eighth, a Justin Rodriguez homer pulled the Tigers within 3-2, but the Cubs were able to hold them off and secure the win. Ramirez continues to produce from the leadoff spot, raising his average to .355 following two hits. Cristian More, Altuve, Anderson Suriel, Duarte, and Geuri Lubo added the remaining hits in the win.