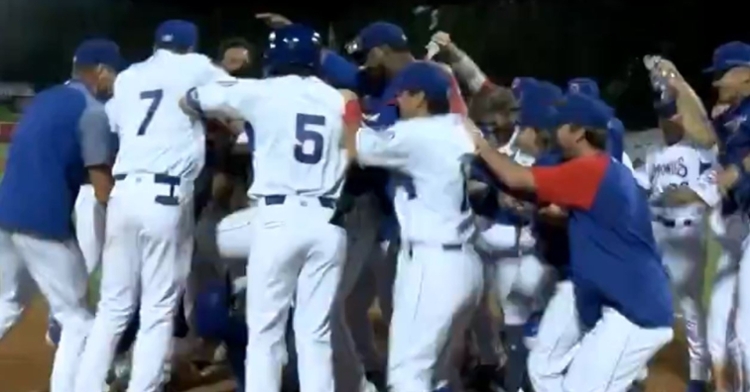 Christopher Morel crushed a walk-off homer for the Smokies

Lost in the excitement of another Cubs walk-off win was the minor league action that went on as it was time for the full-season leagues to showcase their stuff. Looking for better results after a rough Tuesday night on the diamond, the Cubs looked to bounce back only to post a 1-2 record on the day. There was a postponement mixed in with all that as it was a much quieter night on the diamond.

If only the Cubs could finish games, they may have a shot at the postseason. Holding a 4-1 lead through six innings, the Mud Hens pushed across six runs over the final two innings to pick up a come from behind 7-5 victory. Ryan Kellogg has not only asserted himself into the rotation with Adrian Sampson now in the majors, but has improved with each outing.

Wednesday saw him deliver his best outing as a AAA starter going 5 2/3 innings and allowing just one run on six hits to go with seven punchouts. He turned things over to the bullpen that was anything but impressive. Trayce Thompson wasted no time putting the Cubs in front, belting his team-high 17th homer in the first inning to give the Cubs a 2-0 lead. Add a Zach Davis RBI single in the second, and Iowa raced out to a 3-0 lead before Toledo knew what hit them.

After silencing the Mud Hens through five innings, Toledo finally brought a run home in the sixth as Isaac Paredes ripped an RBI double to make things 3-1. Trent Giambrone followed that up with an RBI double of his own in the bottom of that inning, extending the Cubs lead to 4-1. Jared Young was thrown out trying to score on that play, and that run would prove costly.

With Ethan Roberts now on to pitch the eighth, Toledo started to get some great swings on offense and made life difficult for the right-hander. Not only did the Aderlin Rodriguez RBI double make things 4-3, but the Kody Clemens RBI groundout pulled the Mud Hens even 4-4. Juan Centeno capped off the massive five-run inning with a two-RBI single as Toledo led 6-4. They added another run in the ninth on the Christian Stewart single as the Cubs trailed 7-4.

Looking to make some noise in their final at-bat, Thompson connected for his second homer of the game as the Cubs were within 7-5. That would be all the offense Iowa would generate as the next three hitters were sent down to fall by that score. Thompson led the offense with two hits and three RBIs as he was the only player with multiple hits. Greg Deichmann, Tyler Ladendorf, Giambrone, Young, Davis, and Levi Jordan all had hits.

After getting beat down by the Lookouts on Tuesday, it was time for the Smokies to bring the boomsticks outslugging the Lookouts 12-9. Javier Assad got the start allowing five runs in 5 1/3 innings of work, but he wasn't the big story in this one. Christopher Morel was looking to stay red hot as he connected for a first-inning RBI double to give the Smokies a 1-0 lead.

Following a Drew Mount homer in the second that tied things up, Nelson Velazquez made his presence in the leadoff role, connecting for an RBI double to push the lead to 3-1. Just like in the second, Chattanooga continued to battle back using a wild pitch in the third to pull within 3-2 before Lorenzo Cedrola connected for a homer to tie things back up 3-3.

After a plethora of offense over the game's first three innings, things slowed down quite a bit until the sixth inning when the Lookouts were at it again. Brian Rey picked up an RBI single to give the Lookouts their first lead, while TJ Hopkins grounded out to extend the lead to 5-3. Have no fear Velazquez is here as the reigning player of the month unloaded for his 19th homer of the season and seventh with Tennessee as the Smokies were back in front 6-5.

Nelson Velazquez knows what to do with a cement mixer pitch. pic.twitter.com/vCN3VL7YH7

Looking to secure the save was Dauris Valdez, who replaced Burl Carraway in the ninth. After struggling for much of the season in South Bend, Carraway has looked good with Tennessee, and he pitched well again. The same cant be said for Valdez, who uncorked a wild pitch to allow the Lookouts to tie the game before contributing to more runs.

In total, the Lookouts pushed across four runs in the ninth inning, with Francisco Urbaez giving them the lead with an RBI double before singles by Rey and Cedrola pushed the lead to 9-6. Unwilling to go down without a fight, Brennen Davis kept the party going as his 13th homer pulled the Smokies to 9-7 in the ninth. That set the tone for Bradlee Beesley, who picked a great time to hit his first AA homer, tying things up 9-9 and sending the game to extras.

Looking to put the game away in the 10th, Morel came to the plate with two outs and a pair of runners on base. Two pitches into the at-bat, Morel got one to his liking and belted his team-leading 17th homer over the fence to cap off the walk-off 12-9 win.

Incase you missed last night’s game, this is how it ended! ?? #SmokiesBaseball #GoSmokies #Cubs #Walkoff pic.twitter.com/Tw8PpgdwGe

Morel led the offense with three hits to go with four RBIs as Tim Susnara joined him.

Edwin Figuera and Velazquez added multi-hit games, with Velazquez responsible for a team-best five RBIs in the win. Davis, Grayson Byrd, and Beesley all had hits in the win.

Pitching was not an issue for South Bend on Wednesday as the Snappers and Cubs combined for just one run on eight hits. Unfortunately, it was South Bend coming up short as they have dropped the first two games of this series.

Appearing in his seventh game this season was Tyler Santana, who made his first start. You would never have guessed this was his first start as Santana went four innings, allowing no runs on three hits with one walk and six strikeouts. His ERA is now 2.53 on the season. Dalton Stambaugh lowered his ERA to 3.24 after tossing three shutout innings before handing things off to Danis Correa in the eighth.

Despite striking out three, Correa was charged with the loss as he gave up the lone run of the game after the Victor Mesa double put the Snappers in front 1-0 in the eighth. Still, Correa continues to pitch well as his ERA sits at 3.38 for the season. The Cubs mustered just three hits in the game, with Liam Spence, Yonathan Perlaza, and Bryce Windham grabbing those hits. Spence also collected two of the team's three walks, with Yohendrick Pinango getting the other.

Tonight's scheduled game against @Pelicanbaseball has been postponed. It will be made up as part of a doubleheader on Thursday beginning at 5:05 p.m.