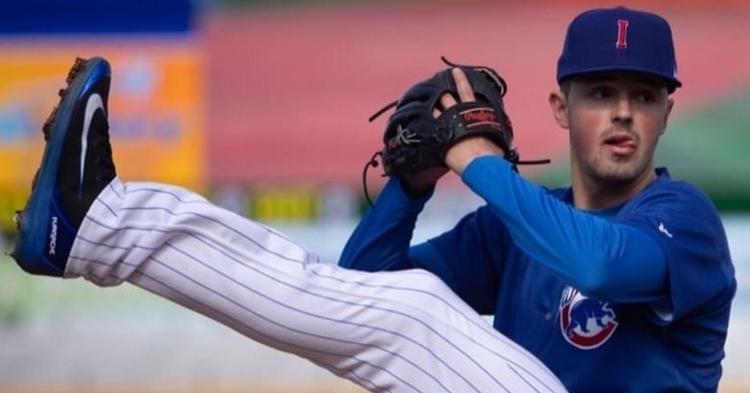 Swarmer had a quality start in the loss (Photo courtesy: Iowa Cubs)

Heartbreak was the theme of the night for the Cubs system as they suffered an 0-4 night on the diamond. Some losses can be tolerated depending on how the teams play, but when you lose two games in either extras or walk-off fashion and the other two without scoring a run, it was not only a heartbreaking night but a frustrating one.

Despite a great start from Matt Swarmer, who went six innings and allowed just one run, the Iowa offense was held in check as they mustered just five hits in a 2-0 defeat. This team has certainly gone through their struggles over the past month, but you have to consider the constant moving pieces that have been called up to Chicago as a reason why.

Tomas Telis greeted Swarmer rather rudely in the first inning as he took him deep for his fifth homer of the season. That would not only be the lone run Swarmer would allow, but the only run the Saints needed as Iowa was nearly lifeless at the plate. The best opportunities the Cubs had to score came in the top of the fourth when they led off the inning with consecutive singles and the top of the six putting a pair of runners on via the walk.

Unfortunately, they could not do anything with it as they continued to trail 1-0. Old friend Daniel Descalso gave the Saints a much-needed insurance run in the seventh when he double off Michael Rucker to make things a 2-0 game, which happened to be the final score. Dee Strange-Gordon led the way for the offense collecting two of the team's five hits. Trayce Thompson, Michael Hermosillo, Trent Giambrone added the final three hits as Giambrone made his season debut.

Ryan Kellogg made another start on the hill, and despite allowing two runs on five hits in four innings, he continues to pitch well, keeping his ERA under the 4.00 mark for the year. Both offenses were held in check through the first two innings, but the Wilson Garcia homer in the top of the third gave Chattanooga a 1-0 lead as they would never look back.

Little did anyone know that lone run would be enough, but the Lookouts added another run in that frame off the Lorenzo Cedrola single to go in front 2-0. Following Kellogg's departure, it was up to the Smokies bullpen to keep things close, and they did just that, allowing only a Garcia RBI groundout in the sixth as their lone blemish. Unfortunately, when the offense only gives you six hits, there isn't much you can do, as the Smokies fell 3-0.

For the first time in over a week, Chase Strumpf had a multi-hit game, collecting two of the team's six hits. Erick Castillo, Brennan Davis, Carlos Sepulveda, and Nelson Maldonado tallied the final four hits for Tennessee as they continue to wait for their health to be back to normal.

While having a pair of team's shutout is frustrating, no loss was more heartbreaking than the Cubs 4-3 loss to the Kernels. After pushing across three first-inning runs to back Matteo Bocchi on the hill, the Cubs bullpen imploded in the ninth as Eury Ramos allowed three ninth-inning runs to give the Kernels a 4-3 walk-off win.

One thing South Bend does exceptionally well is steal bases, as they have tons of speed. They put that speed to good use immediately, with Edmond Americaan singling to lead off the game head of a Delvin Zinn walk. After stealing second base, Americaan advanced to third on a wild pitch. Zinn then stole second, which allowed Americaan to steal home on a perfectly executed double steal making things 1-0.

Zinn followed that steal by stealing third as he leads all High A with 24 steals on 24 attempts. Zinn came home to score on the same play as a throwing error by catcher Jair Camargo had the Cubs up 2-0. Yonathan Perlaza would cap off the big first inning in loud fashion as his third homer of the season gave South Bend a 3-0 lead.

Little did the Cubs know that those three runs would be all they would score, but that was indeed the case as pitching stole the show the rest of the way. Wander Javier put an end to the Cubs shutout outbid in the sixth, taking Samuel Reyes deep for his sixth homer of the season. Following a wild, but scoreless eighth inning by Burl Carraway, Ramos took the ball in the ninth as he looked to lock down the save.

You could tell right from the start that he didn't have his best stuff, but manager Michael Ryan chose to stick with him. That proved to backfire with Ramos walking in the tying run and keeping the bases loaded in the process. Following a mound visit, Ramos was hoping to get the game to extras, but Michael Helman had other ideas doubling home a pair to give the Kernels a 4-3 walk-off win.

Americaan and Perlaza played prominent roles in the team's early offensive success, as they tallied four combined hits in the loss. Caleb Knight and Josue Huma added the final two hits for South Bend as they were quiet after that first inning. Nelson Velazquez and Jake Slaughter went hitless, but Slaughter had the rougher of the two days, striking out three times.

South Bend drops a tough one in the ninth, back tomorrow at 7:35. pic.twitter.com/ZQDyEqCkTP

The most exciting game on the night came from Myrtle Beach, but it was another heartbreaking end. After playing the Riverdogs to a 6-6 tie, the Pelicans headed to extras, hoping for better results. Unfortunately, Bailey Reid picked the wrong time to struggle as he yielded four 11th inning runs in a 10-6 Riverdogs win.

Adam Laskey certainly did his part in trying to help the Pelicans win, as he tossed five strong innings of one-run ball before giving way to a bullpen that wasn't too sharp. His lone run allowed came off the Johan Lopez RBI double in the third as the Pelicans were put behind the eight ball early 1-0. One inning later saw the Pelicans offense start to settle in as they responded in a big way.

It all started with Fabian Pertuz, and his single helping bring things back to even 1-1. With the bases full of Pelicans, Felmin Bautista cleared them with one swing as his double pushed Myrtle Beach in front 4-1. After an Alexander Ovalles double in the sixth closed the gap to 4-2, Jonathan Sierra answered that with a double of his own, stretching the lead back to 5-2.

The seventh inning is when the game changed as Charleston was starting to find their groove offensively. Lopez kept his strong night going belting a two-run shot to close within 5-4. Two batters saw Curtis Mead take his turn to go yard as he tied things up 5-5 with a solo shot. The back-and-forth affair continued the next couple of innings with Matt Mervis poking a go-ahead single through the first base hole only to see Charleston answer with an Oslevis Basabe single as both teams were locked 6-6 with extras on the horizon.

With neither team being able to cash in during the 10th, the Riverdogs made sure that wouldn't happen again in the 11th and buried the Pelicans with a big frame. As if a wild pitch wasn't bad enough to give the Riverdogs the lead, Reid walked in another run before Mead busted the game wide open with an RBI single putting Myrtle Beach in a 10-6 hole.

Myrtle Beach would then go down in order as the Pelicans fall yet again to Charleston 10-6. While most of the bullpen struggled, Tyler Suellentrop certainly did not, as he struck out six batters in three innings of work, allowing just one unearned run on one hit. With 10 hits, the Pelicans saw the ball well, but it was the bottom two in Sierra and Pertuz that combined for six hits. Bautista delivered the big hit as he led the way with three RBIs, while Mervis, Pablo Aliendo, and Ryan Reynolds capped off the hits for Myrtle Beach.