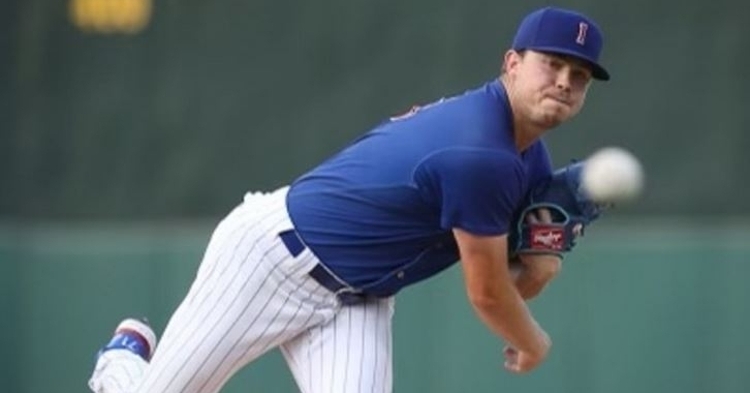 Thompson didn't give up a run in his 3.1 innings of work (Photo via Iowa Cubs)

It was another jam-packed night on the diamond as all seven Minor League teams were in action. Unlike the results earlier in the week, things didn't go as planned as the Cubs limped to a record of 1-5 on the evening.

However, some of the positives to take away were that most of the games were competitive, which makes for great baseball action. That is all fans can ask for at this point as they continue to do their homework on many of these prospects rising through the system.

After completing the doubleheader sweep on Wednesday, the Cubs returned to the diamond Thursday and were shut out by the Indians. The excellent news, pitching was once again the strength as that has been an issue most of the season.

Keegan Thompson made his second start with Iowa and struggled with his command through 3 1/3. All that mattered was his end line, in which he didn't allow a run and surrendered just two hits. Matt Swarmer took over from there, allowing two earned runs in 2 2/3 innings, while Juan Gamez and Dakota Mekkes gave the Cubs three additional shutout innings of work.

The game's lone runs came in the top of the sixth after both teams were held scoreless through five. Anthony Alford connected for his 12th homer of the season with a man on base, putting the Indians in front 2-0. Little did anyone know, that would be all the offense they would need as the Cubs fell by that score. Trayce Thompson led the offense accounting for half of the team's hits with three. Levi Jordan added a pair of hits, with Keegan Thompson adding one of his own.

Just like Iowa, pitching led the way for the Smokies while the offense was left searching for answers. Even with another strong showing on the mound, your results will show when you struggle to score runs, which is what happened in their 2-1 loss. Luis Lugo was impressive in his start, giving the Smokies six innings. Not only did he walk two and strike out eight, but he allowed just one hit while lowering his ERA to 3.93.

He did more than his share to pick up the win, and for six-plus innings, he looked like he would get the win. That was because the Smokies opened the scoring in the first inning by cashing in on a Biscuits wild pitch to take a 1-0 lead. That score held up until the seventh as the Biscuits started to make progress off the Smokies pen.

With Erich Uelmen on the mound, Ruben Cardenas singled home the tying run before the Jim Haley soft liner to right put the Biscuits up 2-1. Unfortunately, those runs would be too much for the Smokies to overcome as they couldn't get anything going in the final two innings. With just three hits, the offense was tough to come by as Carlos Sepulveda led the way with two. Chase Strumpf cashed in with the final hit while Christopher Morel, Brennen Davis, and Nelson Velazquez went hitless.

Ignore this scoreline for just a little bit as this game was much closer than it shows. Yes, the Cubs pitching allowed six runs, but all six runs came in the final two innings after holding them scoreless through seven. Max Bain got the start and gave the Cubs an excellent outing for the first time in a long time.

Bain went 3 2/3 innings without allowing a hit while striking out six hitters. He gave way to Bryan King and Eury Ramos as they two pitched three-plus innings of hitless ball. While the Cubs held the Chiefs hitless through six, Wilfredo Pereira delivered a strong outing of his own, holding the Cubs to just three hits in five innings to go with seven punchouts.

Scoreless through seven, Brad Deppermann took the ball in the eighth, and it was a miserable showing for him. While an error to open the scoring didn't help, Deppermann was never able to recover as the Jhon Torres double, and Pedro Pages homer had the Chiefs up 4-0. The Cubs tried to get back into the game using an Alexander Canario single to get on the board, but that would be all they could with Torres adding an RBI single in the ninth to hand the Cubs a 6-1 loss.

The top of the Cubs lineup did the most damage, with Bryce Windham and Canario picking up four of the team's six hits to go with the lone RBI. Yonathan Perlaza extended his hitting streak to 13 games and is now hitting .253 on the season, with Jacob Olson recording the final hit. Bryce Ball and Jake Slaughter were hitless.

'Twas not to be. pic.twitter.com/C4Z0TosaIq

The theme in full-season ball was pitching, and once again, that proved to be the case in Low-A. With the Pelicans trailing 3-1 entering the ninth, Myrtle Beach capped off a furious ninth-inning rally, resulting in three runs to propel them to a 4-3 win. Richard Gallardo continues to develop into a solid starting pitcher, as he gave the Pelicans five innings of one-run ball in a no-decision effort.

The lone run he allowed was not only in his final inning, but was an unearned run as his wild pitch had the Fireflies taking a 1-0 lead in the fifth. The Pelicans responded to that in the top of the sixth when Luis Verdugo cashed in with a sacrifice fly to tie things up 1-1. Adam Laskey was the first of three relief pitchers chosen by Manager Buddy Bailey, and things didn't go as planned. Not only did he fail to make it out of the sixth, but he was charged with two earned runs as a Rubendy Jaquez double, and the Saul Garza single had the Fireflies in front 3-1.

Still trailing by that score in the ninth, it was now or never for the Pelicans offense as it was their turn to get after the Columbia pen. Yohendrick Pinango and Pablo Aliendo got things started on the right foot as they led things off with singles to put the tying run on base. Both runners were still on base with two outs until Jacob Wetzel came through with a huge RBI triple to tie things up 3-3. One batter later saw Fabian Pertuz connect on an RBI single, which proved to be the winning run.

Wetzel had a solid day at the plate, picking up two hits with those RBIs as he was the lone player with multiple hits. Pinango, Aliendo, Pertuz, Matt Warkentin, Verdugo and Ed Howard all had hits in the win.

While pitching was the story in full-season ball, the same can't be said in rookie ball, at least not in the ACL. Led by four multi-run innings, including a pair of four-run frames, the White Sox made quick work of the Cubs, topping them 14-8. Could this be a preview of what is to come this weekend on the north side?

It didn't matter who the Cubs trotted out on the mound as every pitcher allowed at least two runs in their outing, with the exception being 2B Juan Mora, who threw 1/3 of an inning. It took just two innings for the Sox to get rolling, using a four-run second to grab a 4-0 lead with Sam Abbott and Wilfred Veras picking up RBI doubles and Johnabiell Laureano adding an RBI single.

The Cubs did a great job responding in the third as their offense closed the deficit to 4-3, with Reggie Preciado picking up a two-RBI single before trotting home on the Owen Caissie double. A Jefferson Mendoza homer and Anthony Espinoza's RBI single gave the Sox 6-3 lead after three before the Cubs closed within 6-4 in the fourth. That would be as close as things would get with Veras not only homering in the fourth, but adding an RBI triple in the sixth to help the White Sox grab a 10-5 lead. Preciado added an RBI double to bring home the Cubs fifth run in that stretch.

Hoping to make things interesting late, Miguel Fabrizio and Preciado added singles in the seventh to pull within 10-7. That was until a homer by Shawn Goosenberg, and the bases-loaded triple from Laureano gave the White Sox a commanding 14-7 lead. Ronnier Quintero would add a solo homer in the ninth, but that would be all in the Cubs 14-8 loss.

Ismael Mena has started to come into his own, as he led the offense with four hits, but it was Preciado stealing the show collecting three hits of his own to go with four RBIs. Ronnier Quintero added a multi-hit game of his own while Caissie, Luis Vazquez, Kevin Alcantara, Mora, and Fabrizio rounded out the hits.

Despite a four-four sixth for the Cubs, they spotted the Mets a four-run frame earlier in the game as they fell 6-4. That four-run frame came in the second when Diego Mosquera led things off with an RBI double before Frederick Marte, and Gregory Leal added a sacrifice fly and solo homer to give the Mets a 3-0 lead. Fabian Machado added a double of his own to pad the lead as that 4-0 lead gave the Mets the cushion they needed.

Little did they know at the time, a fourth-inning wild pitch would prove to be the difference as they took the now 5-0 lead into the sixth before the Cubs bats erupted in a big way. Andrews Cruz got things started in that frame as his RBI double not only put an end to the shutout bid but had the Cubs within 5-2. Add in a Cristian More double, and just like that, the Cubs were within 5-4 with one inning to go.

Unfortunately for them, that one-run deficit would be too much to overcome as the Mets added a sixth run off a wild pitch to claim a 6-4 victory. More was the catalyst for the offense picking up two hits, to go with a walk and two RBIs from the leadoff spot. Cruz, Starlin Mateo, Anderson Suriel, and Wilmer Boliver rounded out the hits.