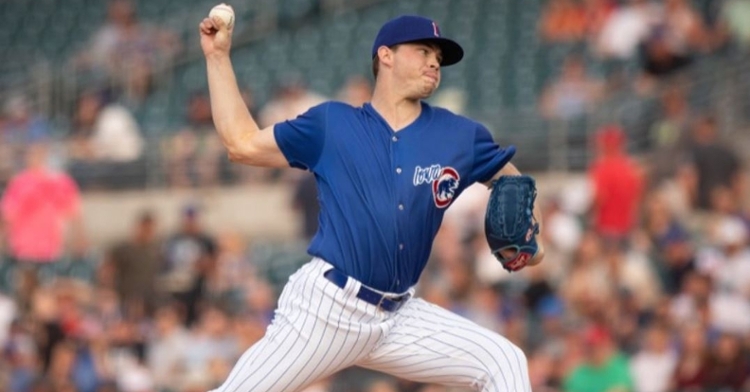 Sunday went about as good as it could go down on the farm with the Cubs posting a 3-1 record. Not only was the offense a significant story all day long, but so was the pitching, especially at Iowa as they came within five outs of tossing the organizations fifth no-hitter of the season and second by Iowa this season.

Despite not getting it done, the organization left plenty to get excited about on Sunday as they continue to provide better quality than the major league team right now. The only questions that remain will be who is left standing on these rosters once September 1st arrives.

The Cubs used a fantastic pitching performance on Sunday to claim the series as they came within five outs of their second no-hitter of the season. Keegan Thompson got things started on the mound delivering 4 1/3 perfect innings to go with seven strikeouts. Four starts into his AAA season, and Thompson has yet to give up a run making a decision on him intriguing.

Dakota Mekkes, Dillon Maples, and Matt Swarmer saw time on the mound, with Swarmer allowing the lone hit for Omaha in the eighth inning. While the Cubs pitching took center stage, the offense deserves a ton of credit as Taylor Gushue put the Cubs up for good with an RBI double in the second before Jared Young doubled that lead with a single.

That 2-0 score held until the fifth inning when Alfonso Rivas and Young added two more RBI singles with a double play pushing across another run to extend the lead to 5-0. One inning later saw the Cubs bust things open with Nick Martini picking up a bases-loaded walk to push the lead to 6-0. Rivas and Young added RBI singles later in the inning, with Gushue picking up his second RBI double of the day to cap off a 10-0 win.

Young led the way for the offense picking up three hits to go with three RBIs, while Rivas and Gushue added two hits to go with five combined RBIs. Abiatal Avelino picked up two hits in the win while Michael Hermosillo suffered a rare hitless game.

ONE hit away from our third no-hitter of the season, but we will take the series win. pic.twitter.com/3lOPnKsn7G

The Smokies broke out the bats on Sunday and ended their series in a big way picking up a 12-3 win against the Trash Pandas. Cam Sanders is starting to come into his own, winning his second straight start by giving Tennessee five innings of three-run ball.

He didn't have to be at his best as the Smokies offense backed him with plenty of support, including three runs in the first. After an error opened the scoring for the Smokies, Tyler Payne came through an RBI single later, giving the Smokies a 3-0 lead. Rocket City got on the board off a Carlos Herrera homer in the second before Chase Strumpf answered with a homer of his own in the third to push the lead to 5-1.

Chase Strumpf's hot August continued yesterday with a pair of hits, including a homer, and 4 RBIs for @smokiesbaseball.

More on the @Cubs prospect and other top performers: https://t.co/5Guxj7OJiK pic.twitter.com/qquS5IjsVY

Doubles by Ray-Patrick Didder and Orlando Martinez kept Rocket City close for five innings, but after the fifth, it was all Smokies. Leading 6-3 in the seventh, the Smokies erupted for a five-run inning, with Cam Balego getting things started with a single. Strumpf followed that up with an RBI double before Christopher Morel picked up a sacrifice fly. Nelson Maldonado took one for the team with a bases-loaded hit by pitch as the Smokies led 11-3 after seven.

Already with the game in hand, Morel added an exclamation point connecting for a long homer to left-center in the eighth as the Smokies rolled 12-3. Not only was Strumpf one of four players to record two hits, but he led the way with four RBIs in one of his better games of the season.

Christopher Morel unloads on this one. pic.twitter.com/HgLBPKNSZT

Carlos Sepulveda, Maldonado, and Payne had two hits in the win, while Brennen Davis went hitless.

The only team to not come away with a win on Sunday was South Bend, who dug themselves an early hole. With Anderson Espinoza on the hill, the Cubs found themselves in a 4-0 hole in the first inning as he was chased after just 2/3 of an inning. Most of that damage came on a Justin Lopez bases-loaded double as that hit put Fort Wayne in front for good 3-0. Luis Almanzar added an RBI single pushing the lead to 4-0 after one.

Not only were the Cubs down by four, but given the way Fort Wayne was pitching, it was going to be a long day at the plate. With Jose Albertos now on the mound, the Tin Caps pushed their lead to 6-0 in the fourth when Adam Kerner and Chris Givin added RBI doubles to pad the lead. It took the Cubs nine innings to score, but they put an end to the shutout bid in the ninth when a run came home on a double play. That was all they could do in a 6-1 defeat.

Luis Vazquez led the way for the offense picking up two of the five hits for the team. Tyler Durna, Alexander Canario, and Jake Slaughter picked up the remaining hits while Liam Spence and Bryce Ball went hitless. Scott Kobos tossed a pair of scoreless innings to lower his ERA to 0.71 on the season while Burl Carraway continues to improve.

What looked like it would be a series loss to the Riverdogs turned into a split as the Pelicans erupted for eight runs in their final two at-bats to take the win. Daniel Palencia got the start and allowed three runs in 3 1/3 innings, while Dalton Stambaugh surrendered two unearned runs in 2 2/3 innings. The rest of the Pelicans arms were impressive as they kept the Riverdogs in check the final few innings to give the offense a chance.

In the third, Diego Infante put the Riverdogs up 3-0 as he connected off Palencia for his 11th homer of the season. After Jonathan Sierra put Myrtle Beach on the board with an RBI single in the fourth, the Riverdogs answered with the Abiezel Ramirez singled in the fifth to build a 5-1 lead. Add in a wild pitch in the seventh, and the Pelicans were down 6-1 with things looking bleak.

The bottom of the seventh was when things began to change as the Pelicans were starting to chip away. A wild pitch certainly helped that, but the Jordan Nwogu single pulled the Pelicans with 6-4, and suddenly we had a ball game. One inning later, same results as the Pelicans had the Riverdogs bullpen timed up.

With Matt Warkentin pulling Myrtle Beach within 6-5 off an RBI single, Ed Howard tied things up using an RBI single of his own to get the job done. After a wild pitch mixed with an error allowed for two more runs to score, Nwogu capped off the comeback bid with his second RBI hit in as many innings. Gabriel Jaramillo took care of the rest in the ninth as he finished off Charleston to improve to 4-1 on the season, lowering his ERA to 1.60 in the process.

Nwogu, Sierra, Kevin Made, and Pablo Aliendo led the way with two hits as Nwogu paced the offense with three RBIs. Everyone else in the lineup collected one hit in what was one of their best victories this season.