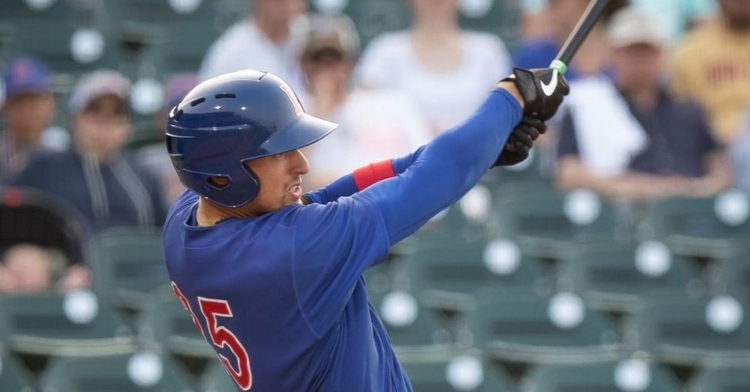 Saturday was an extremely busy day on the diamond, with all seven teams in action once again. With one team playing a doubleheader, there was a total of eight games to be played, and the Cubs delivered at a strong level.

Even with one game getting suspended to be picked up on Saturday, the Cubs still managed to pick up a winning record on the night, going 4-3 across the board. That is becoming far more frequent now than earlier in the season, which you want this time of year.

For the most part, this series has been dominated by pitching, but that wasn't the case Friday. Led by a seven-run fifth inning, the Indians got the bats rolling as they were able to withstand the Cubs 12-8. Michael Hauschild got the start and struggled through his four innings of work, allowing four earned runs on seven hits. However, Ryan Lawlor was the one that got hit the hardest, allowing seven runs in 1/3 of an inning to put the game out of reach.

It was the Anthony Alford show early on, as he didn't just homer in the first, but also in the third as the Indians raced out to an early 3-0 lead. The long ball continued to play a significant part in the Indians game, with Hunter Owen going deep in the fourth to extend the lead to 4-0. In the fifth inning, things went from bad to worse as the Indians pushed across seven runs to open an 11-0 lead.

Homers by Chrisitan Bethancourt and Michael Chavis pushed the lead to 8-0 before a bases-loaded walk by Erik Gonzalez gave the Indians a 9-0 lead. Alford built off an already great game with another RBI hit as his single put the Cubs in a huge hole. Despite being down 11, the rest of the game was all about the Cubs as they scored eight runs the rest of the way to make things interesting.

Three of those runs came in the fifth when Nick Martini ended the shutout with an RBI before Trayce Thompson went deep for his 12th homer of the year. Thompson wasn't done having a big game picking up his second two-run shot in the eighth to make things 11-5. After Owen went deep in the ninth to push the lead back to seven, Martini homered to close the gap to six before an error helped the Cubs get within 12-8 before falling by that score.

Martini had a perfect night at the plate, going 3-3 with a walk and a pair of RBIs. Thompson continued his excellent series, connecting for a couple of hits to go with his four RBIs. Trent Giambrone (3) and Levi Jordan (2) joined them with multi-hit games, while Taylor Gushue recorded the final hit.

In game one of a doubleheader, the Smokies attacked the Biscuits early and often using a seven-run to cruise to a shutout win. Dakota Chalmers not only got the start but was greeted with plenty of offense, making things easy for him. He went six innings allowing just one hit in the victory before recently promoted Samuel Reyes finished things off.

Up 1-0, after the Brennen Davis sacrifice fly in the first, the Smokies took complete control of the game with a massive second inning. That all started with Chase Strumpf and his two-run shot before Carlos Sepulveda added an RBI single. Now up 4-0, Davis came through again as his RBI double extended the lead to 6-0. Jared Young capped off the seven-run frame with a

homer of his own as the Smokies led 8-0 after two.

That would be more than enough for the Smokies as Chalmers shut down the Biscuits offense all game long. The Smokies added two runs later in the game, with Sepulveda adding a sacrifice fly before Nelson Velazquez went deep for the first time with Tennessee. Strumpf and Young paced the offense with a pair of hits to go with two RBIs, while Davis broke out of a lengthy slump with three RBIs.

While game one was dominated by the Smokies, game two was an entirely different story as the Biscuits got the upper hand 5-3. Despite a decent outing from Ryan Kellogg on the hill, Wyatt Short took the loss, allowing a pair of late runs to give the Biscuits the win.

For the second time in the evening, the Smokies struck first, with Davis picking up another RBI double in the first. The Biscuits answered in the second with a Seaver Whalen RBI single before Davis put the Smokies back in front in the fourth with his 12th homer of the season.

Brennen Davis seems to be back in a groove pic.twitter.com/3lQ6LbcR8T

Still in the fourth, Strumpf came through with another RBI double as the Smokies built a 3-1 lead.

As tough as things were early, the Biscuits wouldn't go down without a fight as the Austin Shenton homer pulled Montgomery within 3-2. That was until Whalen connected for his second RBI hit of the day, and just like that, it was 3-3. Still tied 3-3 in the sixth, Niko Hulsizer came through with the game-winning knock as his two-run shingle gave the Biscuits the late lead before winning 5-3.

Davis and Strumpf provided all the offense as they combined for four hits to go with all three RBIs. Velazquez picked up another hit and is hitting a .273 to start his AA career.

In what was a great game through six innings, the Cubs and Chiefs saw their contest suspended in the seventh with the score tied 3-3. The game will be continued Saturday. Joe Nahas took the ball for a start and gave South Bend 5 2/3 innings of 10-hit ball, but only allowed three runs to keep things close. He gave way to Eduarniel Nunez, who struck out three of the four batters he faced.

I got to hand it to the Pelicans as they are quietly playing great baseball and are within two games of .500. Led by impressive pitching once again, the Pelicans were able to keep the Fireflies offense in check before picking up a 3-2 extra-inning win. Tyler Schlaffer delivered what may have been his best outing of the season for the Pelicans going 5 1/3 and allowing just two runs with one earned.

The lone earned run he allowed came in the bottom of the fourth when Tyler Tolbert connected for his third homer of the season to give Columbia the 1-0 lead. Two innings later, Jose Almonte was now in relief of Schlaffer and brought home the game's second run as an errant pickoff attempt gave the Fireflies a 2-0 lead through six.

It may have taken the Pelicans offense seven innings to get going, but better late than never as the Ethan Hearn sacrifice fly pulled the deficit to 2-1. One inning later saw Matt Mervis pick up a game-tying RBI double as the Pelicans were back to even without an RBI hit. With nine-inning not being enough, the teams moved to the 10th, where Jordan Nwogu not only singled home the go-ahead run, but the winning run as the Pelicans win again 3-2. The win gives the Pelicans a season-high four-game winning streak.

Nwogu (3) and Kevin Made (2) provided most of the offense as they combined for five of the teams seven hits. Jacob Wetzel and Fabian Pertuz added the rest in the winning effort.

Pelicans win their fourth straight game against the Fireflies in 10 innings. #MBPelicans pic.twitter.com/Uox9HR7viI

The Cubs used some late-game magic to get it done as they topped the Indians to move to 10-4 on the season. Things couldn't have gotten off to a better start for the Cubs, with Reivaj Garcia going deep in the first for a quick 2-0 lead. Not only did the Indians have an answer with Micael Ramirez singling in the first, but Luis Durango also homered in the second to tie things up before a double play in the third had the Indians in front 3-2.

That would be all the offense they could muster until late as it was time for the Cubs to get back to business. Reggie Preciado tied things up with an RBI single in the fifth before the Ismael Mena ninth-inning sacrifice fly gave the Cubs a 4-3 lead. Still in the ninth, Rafael Morel came up clutch as his RBI single had the Cubs in front 5-3.

His hit proved critical as Dayan Frias picked up a ninth-inning single of his own to pull within 5-4, but the Cubs would hold them off to win. Mena and Morel had strong showings, picking up two hits each to lead the way. Preciado, Garcia, Owen Caissie, and Aramis Ademan were just a few players to record hits in the win.

The Mets just needed one run to pick up the win, topping the Cubs 1-0. Pitching was undoubtedly the story in this one as both teams combined for a total of six hits, with the Cubs recording just one. That hit came from Pedro Martinez as his impressive season continues. With Emmanuel De La Cruz on the mound in relief of starter Gabriel Agrazal, the Mets pushed across the games lone run, with Gerald Mejia picking up the sacrifice fly to give the Mets the win.

On the strength of two three-run frames, the Cubs were able to pick up their fifth win of the season, topping the Indians 6-3. Gleiber Morales started allowing one run in three innings before Gregoris Carrasquel finished off the final four innings allowing two runs to go with four punchouts.

It was the Indians striking first in the second inning, capitalizing on a Morales balk to take a 1-0 lead. That lead was short-lived as the Cubs went to work in the third inning. After an error got the Cubs on the board, Early Tatis gave the Cubs the lead with an RBI triple before another error had them in front 3-1.

With that score still holding in the fifth, the Indians were able to pull even as Robert Lopez picked up an RBI triple of his own before coming home on a Simon Rodriguez double to make things 3-3. Like earlier in the game, the Cubs had an answer for the Cleveland offense and used their second three-run frame to take a 6-3 lead.

Cristian Hernandez played a part in that as his single helped move runners along before an error aided the go-ahead and eventual winning run. Add in a wild pitch, and the Offerman Hernandez single and the Cubs doubled up the Indians 6-3 with the game being called after five. Tatis and Carlos Ramos led the offense with two hits while Hernandez collected two RBIs to go with his hit. Frank Hernandez, Offerman Hernandez, and Jerry Torres rounded out the hits in the win.