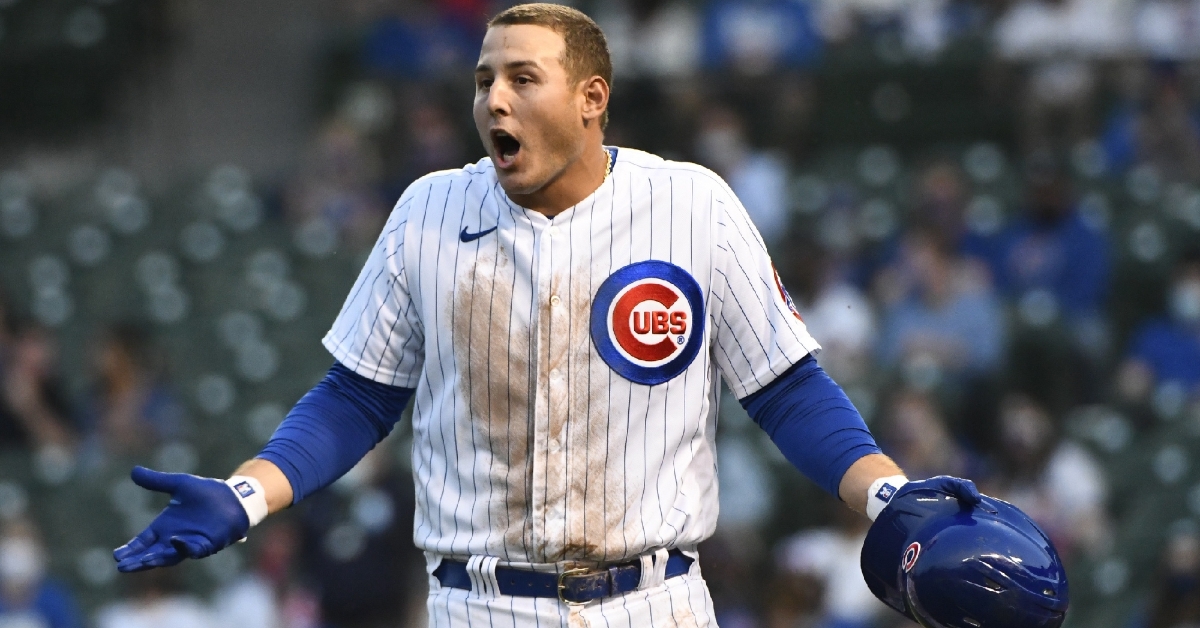 Anthony Rizzo's frustration over a correct strike-three call that did not go his way sums up a frustrating loss for Chicago. (Credit: Matt Marton-USA TODAY Sports)

CHICAGO — Snapping a three-game winning streak, the Chicago Cubs (3-2) mustered just one hit at the plate and failed to put up much of a fight in a loss to the Milwaukee Brewers (2-3) on Tuesday. For the second straight game, the Brewers tagged Cubs pitching for a three-run home run. This time around, Travis Shaw took Adbert Alzolay deep in the first inning, and the Brew Crew went on to post a 4-0 shutout at Wrigley Field.

Alzolay struggled in the opening inning but settled down after that. Overall, he was taken for four runs on four hits and two walks in five innings of work. In addition to the aforementioned three-run bomb, Alzolay, who struck out four, gave up a solo shot to Omar Narvaez, who hit a three-run jack on Monday. Freddy Peralta started on the mound for Milwaukee and fanned eight in five scoreless innings pitched. He walked four and gave up just one hit. Brent Suter pitched three innings in relief for the Brewers, earning him his first hold of the year. Peralta moved to 1-0 overall, and Alzolay fell to 0-1 overall.

A fourth-inning double by Kris Bryant was the lone hit of the night for the Cubs. Bryant reached third on the play because Christian Yelich committed a fielding error in left field. Javier Baez had a rough night with a bat in his hands, going 0-for-3 with three strikeouts. David Bote did not accomplish anything offensively, but he made a couple of tremendous plays at second base, one of which involved a stellar cross-body throw to first base that resulted in an out. Narvaez went 2-for-3 with one walk and one strikeout.

In the top of the first, a Daniel Vogelbach walk and a Christian Yelich single set up Shaw's three-run homer. Ian Happ drew a leadoff walk in the bottom of the first, but Willson Contreras then grounded into a double play. Anthony Rizzo ended the inning by striking out swinging. He was unable to check his swing on a third-strike pitch that hit him in the leg but was not pleased with the strike call, feeling as if he did not go around. Joc Pederson drew a second-inning walk and took second base on a wild pitch but did not score.

The third frame ended with Contreras getting caught stealing second. Despite replay showing that he might have been safe, the Cubs opted not to challenge. Narvaez cranked a solo shot in the top of the fourth, and Bryant's one-out double followed suit in the bottom half of the inning. Bryant reached third due to Yelich erring in the outfield, but the Cubs were unable to bring him home.

Narváez hit his second homer in as many games. It's 4-0 Brew Crew.#ThisIsMyCrew pic.twitter.com/vbzrjAhZE8

Vogelbach, a former Cubs prospect, lined into a double play to end the top of the fifth, and the Brewers were unable to add to their lead in the eighth after putting a couple of baserunners on against Dillon Maples. Matt Duffy walked with two outs in the eighth, but Happ then flied out to the warning track. In the ninth, Contreras was hit by a pitch for the second game in a row, and the benches cleared as he aired out his frustrations over it. Brad Boxberger, who beaned Contreras, wrapped up the 4-0 contest soon afterward.

The benches have cleared in the Brewers-Cubs game after Willson Contreras was hit by a pitch.