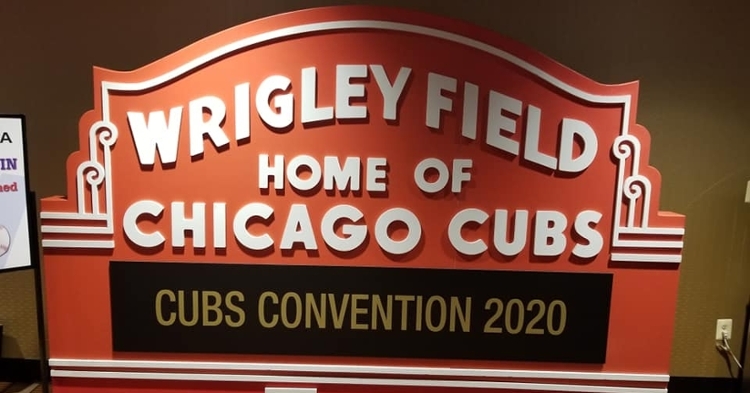 Jed Hoyer: Well, Chicago, expect changes. Jed Hoyer said today on 670 The Score, that the Cubs were probably past the window to extend most of their core players. Expect the worst, hope for the best, I suppose.

Kris Bryant has the flu. For real. No conspiracy. He’ll be at the convention but not doing a lot.

Javy on extension: "It's up to them. I really have no comment about it. When the right deal comes, we'll be ready for it."

Theo on offseason: “Maybe we’re doing an Ali rope-a-dope on everybody and we’ll do some stuff later.”

Epstein went on to say, "What's most likely is status quo - it's hard to get long-term extensions done; it's hard to get trades done. We have what we feel is a pretty good club. We're trying to compete this year and we're not in a position where we *have* to do anything.

Theo was asked about the Bryant grievance taking so long: “Its important to respect the process. It’s a significant case for the industry. I’m not going to sit here and complain about it.”

Theo on extension talks w/players: “We’ve moved the ball forward a little bit. Not sure what the outcome is going to be. Some productive talks.” No names mentioned, but it’s assumed he was referring to Javy, per Jesse Rogers.

Baez on his future with Cubs pic.twitter.com/C8eUHmii0Y

Darvish on Bryant: "All the players are thinking the same way -- we don't want him to go anywhere. But, it's a business, right? But, he's a great person and a great player. I hope he's staying with this team."

Darvish on the scandal: Yu Darvish was asked about the Astros stealing his signs in Game-7 of the 2017 World Series: “That’s what I want to know. A couple of Astros players told me I was tipping pitches but now it comes out they were stealing signs. Was I tipping or were they stealing?”

Darvish on pitching in that environment: “We're losing the strike zone. It’s getting smaller. They want me to play quicker. And the hitters are stealing signs. It’s tough to pitch.”

Cubs pitching coach Tommy Hottovy said Brandon Morrow is on target to be on same schedule as rest of pitchers in camp. If he is behind at all, it'll be the Cubs being cautious, not because Morrow is physically behind.

Schwarber on the Cubs: Kyle Schwarber says he feels as though the Cubs are being overlooked. “"Yes, I do. I feel like a lot of people want to write us off just because the last two years. I'd live and die by this team right now."

Tyler Olsen: Add another minor league deal to the Cubs’ offseason, as the team has agreed to a deal with LHP Tyler Olson ($650k base salary, if he makes the MLB squad). Olsen posted a 4.66 ERA in 58 total innings with the Indians over the last two seasons, but at one point during the 2017 campaign, he allowed zero earned runs over a 20-inning stretch.

Cubs acquire righty: The Cubs and Dodgers did some swapping yesterday, as Chicago acquired RHP Casey Sadler from the Dodgers in exchange for infield prospect Clayton Daniel. Sadler would seem to be one of the more promising signings this winter.

Cubs eyeing outfielder: MLB’s Jon Heyman is reporting that the Cubs are showing interest in former Yankees centerfielder Jacoby Ellsbury. The 36-year-old, injury plagued outfielder was released by the Yankees this winter, after the team refused to pay him for the 2019 season.

As you may recall, Ellsbury sought medical treatment from non-team-approved doctors, which the Yankees say voided their deal. Ellsbury has not played in the past two seasons but does own a lifetime batting average of .284 with 104 homers, 512 RBI and 343 stolen bases. He’s also the only player in MLB history to hit 30+ home runs, hit 45+ doubles, steal 35+ bases and be worth a 1+ dWAR in a single season.

At this point, the Cubs are grasping at straws to augment the current roster, but hey – the more, the merrier.

Theo on sign stealing scandal: “We applaud MLB's efforts to step up in this situation and make sure the games are played with integrity.”

Tom Ricketts: “There’s no magic free agent out there, anyway. You look at what happened last year with the Padres [referring to Manny Machado] or the Phillies [referring to Bryce Harper] and it doesn’t always solve your problems.”

Rizzo’s ankle: Who’d have thought that Anthony Rizzo’s ankle injury would still be an issue? Well, apparently, it is. Rizzo says that he’s 90% now with some limitations. Not good news to start the season, though he says he’ll be ready, “Hopefully by February 15th.”

Make sure your worst enemy doesn't live between your ears. Self doubt kills dreams. You are more capable than you think. -Kris Bryant pic.twitter.com/f2FJDjmKnq

Everything You Need To Know About The Current State Of Major League Baseball As Told By Mean Girls pic.twitter.com/2HrKoY0yJc

Nationals: Ryan Zimmerman says that he expects to re-sign with Washington soon. Zimmerman has spent all 15 years of his MLB career in Washington.

Rockies: Colorado reliever Justin Lawrence has been suspended 80 games without pay after testing positive for PEDs.