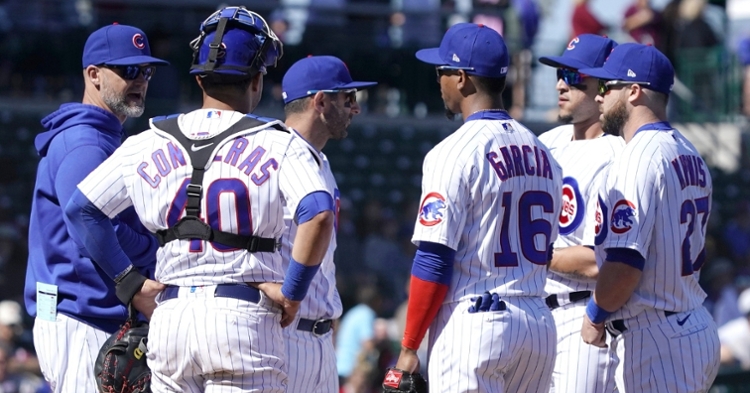 Next Game: Today: 3:05 PM: Cubs at Giants, from Scottsdale Stadium.

Minor League options: As David Ross works his way toward this summer's 26-man roster, he must bear in mind that a few of his pitchers are out of minor league options. Casey Sadler (who I think will make the team), Duane Underwood Jr. (whom I think the Cubs will outright) and Alec Mills, who won't get a starter's slot, but will serve as a swingman in the Cubs' bullpen this summer.

Bullpen chatter: Ross has his work cut out for him, as few bullpen arms have stood out this spring. With the new rules, teams can only carry a total of 13 pitchers, five of which are tied up in the starting rotation. Craig Kimbrel and Jeremy Jeffress will make the 26-man roster, no questions asked. I think Sadler and Mills join them, as will Brad Wieck, Kyle Ryan, and presumably, Rowan Wick. That eighth spot is where the million-dollar question arises.

Adbert Alzolay isn't ready, nor is James Norwood. The Cubs have already optioned Justin Steele, Oscar De La Cruz, CD Pelham, Jason Adam (wise choice), and others. Rex Brothers should be on the next cut-sheet, as will several others.

Ross is also trying to figure out his second base and center field issues. While nobody has overly stood out (defensively) at second, the center field slot seems to be offering Rossy a lot of choices.

Cubs farm system: Theo Epstein's mission for the duration of his contract (as reported earlier this winter) is to restock a Cubs' minor league system that was stripped as the Cubs built for their 2016 World Series win. Thus far, he's not making much progress.

An MLB article by Jim Callis and others ranked all 30 MLB teams’ farm systems. The Cubs rank 23rd on their list, which cited, "The Cubs continue to have more success developing hitters than pitchers, with Marquez a notable exception."

The Rays ranked first, while the Brewers were ranked 30th. Other NL Central rankings included:

Pirates (ranked 15th): "The trio at the top are elite-level guys, but this system has more depth than it does impact talent right now."

Cards (ranked 18th): "Carlson is one of many Cardinals prospects poised to contribute in 2020, though the real gems of the system are still several years away from making an impact."

Reds (ranked 24th): "Some top guys graduated off this list and some prospects left via the trade that netted the Reds Trevor Bauer, though getting Greene back on the mound will help boost this system."

Coronavirus' impact on baseball: Thus far, MLB has no plans to delay the start of the season, but that's not the case in Japan or Korea, where the season openers have both been delayed.

MLB released a statement to the Baseball Writers' Association of America on Monday:

"We are undertaking many precautions currently. For example, we are asking anyone — including media — who has visited a high-risk area, as defined by the CDC, within the last 14 days not to visit our facilities.

"We are also discussing additional measures internally and with other leagues. At this time, we have not made changes to our media-access procedures, and we will advise if we determine to take such steps."

I consciously memorized the speed at which every pitcher in the league threw his fastball, curve, and slider.

Then, I'd pick up the speed of the ball in the first thirty feet of its flight and knew how it would move once it had crossed the plate. -Stan Musial pic.twitter.com/NrZFa6gVgZ