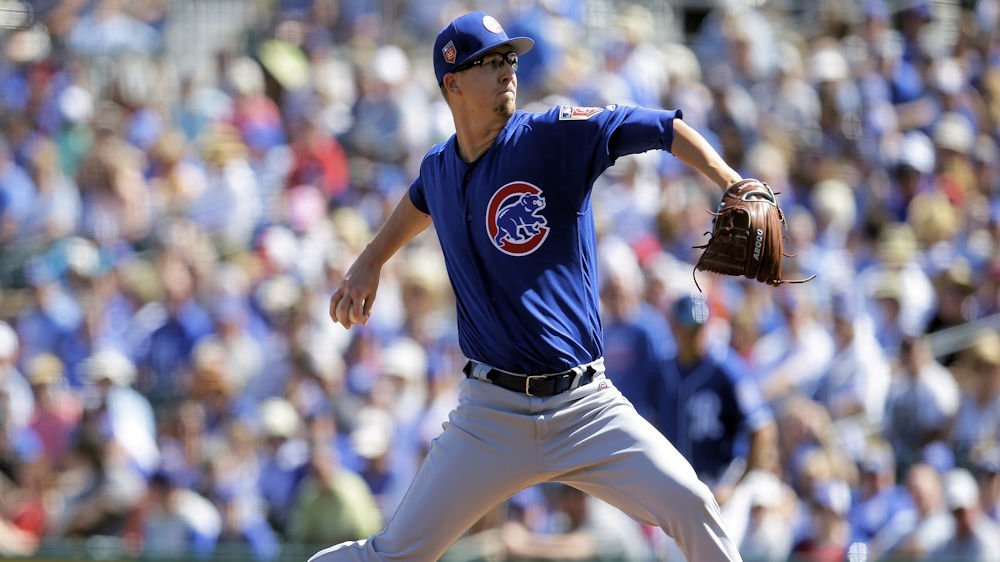 A night after going winless in Minor league play, the Cubs farmhands were ready to get back to work and back to winning ways. It was a much better night on the for most of the teams as the Cubs went 3-2 on the evening.

IOWA CUBS 7 – New Orleans Baby Cakes 4: In a busy day of baseball for Iowa, the Cubs were in New Orleans for a doubleheader. After being shut out in game one, the Iowa bats came to life in game two earning the split on the day with a 7-4 win.

Returning from the IL was Alec Mills who got the start in hopes of making it back to the bigs this season. If his first start was any indication, Mills will be in Chicago sooner or later as he tossed four strong innings of one-run ball with three punchouts. The eight hits were concerning, but they didn’t hurt him in the long run. Matt Carasiti picked up the win with Rowen Wick closing things out. Dakota Mekkes was roughed up in his inning of work.

The lone run on Mills line came in the first inning as the Baby Cakes scored first. After recently being sent down by the Miami Marlins, JT Riddle made an immediate impact doubling home the games first run for the 1-0 New Orleans lead. Mills was excellent after that as the Cubs wasted no time grabbing him some run support.

Zach Borenstein and Johnny Field were on base keeping the Baby Cakes on their toes. That was until Ian Rice cracked his first homer of the season for the 3-1 Iowa lead. That lead continued to grow in the fifth after a Borenstein single, which was followed up by the Phillip Evans groundout and a 5-1 lead.

With a wild pitch in the sixth giving Iowa the 6-1 lead the game seemed like it was in full command with just one inning to go. Thankfully Donnie Dewees didn’t get that memo as he plated the seventh and final run for Iowa with a sacrifice fly and 7-1 lead. The Baby Cakes wouldn’t down without a fight and made things interesting in the bottom of the seventh as Gabriel Guerrero and Peter O’Brien plated a trio of funs to brings things within 7-4 before falling.

At 8-4 the Cubs continue to play strong baseball showing vast improvement from a season ago. Trent Giambrone was finally kept in the yard going 1-4 in the game while Ian Happ went hitless with a pair of punchouts. Rice led the way with his three RBI’s and two hits.

IOWA CUBS 0 – New Orleans Baby Cakes 5: With a busy day of baseball ahead for Iowa with a doubleheader, the Cubs were hoping to get off on the right foot in game one. That was not the case as the Cubs were blanked 5-0 and held to just two hits.

Duane Underwood took the loss in this one as his rough start to the season continued. Underwood lasted 5 1/3 inning allowing just two hits and striking out seven. Unfortunately, New Orleans made those hits counts as three walks sprinkled in helped the Baby Cakes plate four runs off him.

Two of those four earned runs came in the first inning as Iowa was playing catchup early. An Isan Diaz home run followed a Monte Harrison leadoff single and just like that it was 2-0 New Orleans. Those would be the only two hits Underwood allowed as he was strong for most of his outing.

It was in the sixth inning where Underwood began to lose his command. A leadoff walk to Harold Ramirez added to a Diaz walk two batters later spelled the end of his day as James Norwood took over. A Riddle single greeted Norwood before Yadiel Rivera singled with the bases loaded to make it a 5-0 game. Two of those three runs were charged to Underwood while Norwood was tagged with one.

The Cubs managed just three baserunners in the contest with an Underwood single and a Happ double the lone two hits. Wynton Bernard was the final baserunner in the game as he picked up a walk.

TENNESSEE SMOKIES 6 – Jackson Generals 7: Things looked promising for the Smokies Wednesday night as they led the defending league champions 5-1 after six innings of play. However, a six-run seventh inning would be the deciding factor as the Generals fought back for the 7-6 win.

Cory Abbott got the ball and continued to dominate Southern league hitters. In his 5 2/3 outing, Abbott allowed one run on just three hits, walking one and striking out seven. His ERA now sits at 1.65 which is one of the best in all of AA. That single run allowed came in the second inning when Marcus Wilson tagged him for a homer to give Jackson the 1-0 lead.

Seeing how well Abbott was pitching on the mound, the Smokies wanted to return the favor at the plate, and they did just that in the third. Christian Donahue got the Smokies on the board with a sac-fly. A Jared Young single followed that before Robel Garcia delivered the big blow with his second homer of the season for the 5-1 Tennessee lead.

Final line for @smokiesbaseball starter @Cabbott40, the @Cubs no. 9 prospect

The Smokies found out the hard way that the defending champions were champions for a reason as the Generals teed off on the pen. Without hitting a home run in the seventh, Jackson strung together a string of hits that helped push across six runs. Ramon Hernandez brought home the final run with a sacrifice fly to push things to 7-5 as that proved to be the winning run.

Looking to recover from the meltdown in the top half of the frame, the Smokies were threatening once again. A leadoff Roberto Caro walk followed by a steal had him in scoring position with no outs. Connor Myers capitalized on that situation with a single bringing the Smokies to 7-6. The Nico Hoerner double play not only killed the rally but appeared to be the dagger as seven of the last eight Smokie hitters were retired.

Tennessee has hit their first rough patch of the season falling to 7-5. P.J. Higgins stayed hot as his average climbs to 317 following a pair of hits. Garcia with that home run is now hitting .455 while the rest of the Smokies are still looking to find their groove. Hoerner had one at-bat and grounded into the double play.

MYRTLE BEACH PELICANS 5 – Frederick Keys 3: At long last, the Pelicans found their way back into win column knocking off the Keys Wednesday night. Myrtle Beach used a balanced attack to back Bryan Hudson who picked up the win in the 5-3 Pelicans victory.

Hudson was strong on the night going 5 1/3 inning of two-run six-hit ball, but one of those runs happened immediately in the first inning. With a runner in scoring position, J.C. Escarra singled home the first run of the game to put the Keys in front 1-0.

Myrtle Beach responded with a nice bottom of the first as their offense got going. Luke Reynolds and Miguel Amaya got the party started by both reaching base. That was before Cam Balego connected for his first double of the season to give the Pelicans a 2-1 lead. That lead continued to grow in the bottom of the third when Balego was in the middle of the action again. This time it was Jhonny Bethencourt bringing him home and a 3-1 lead.

With Hudson continuing to deal on the mound and making things look easy, three runs appeared to be enough. Don’t tell that to the Keys as they began to rally in the sixth. Ryan Ripken continued his steady series with a single to center to cut things to 3-2. The Pelicans responded with an RBI bunt single from Zach Davis in the bottom of the sixth to go back up two at 4-2.

Frederick refused to give up as the two teams continued to exchange runs. This time it was a seventh-inning single from Jomar Reyes to climb back within one at 4-3. Jimmy Herron delivered the final blow in the bottom of the eight with an RBI single to push the lead back to 5-3 before the Keys were retired in the ninth by Brian Glowicki.

The Pelicans still sit in last place following the win but are now 3-11. Amaya saw his average break .200 at .205 following his 1-3 game with Herron and Balego each adding a pair of hits themselves.

SOUTH BEND CUBS 2 – Great Lakes Loons 1: It was all about the pitching in South Bend Thursday night as both teams brought their best stuff. Led by four arms which all spun a gem, it was a late Cubs run that was the difference in the 2-1 win.

The big news of the night was Mike Montgomery who began his rehab assignment to get back to the MLB club. In his two innings of work, Montgomery was flawless allowing just one hit and striking out four. He even left with the 1-0 lead after an Andy Weber sacrifice fly in the bottom of the first.

The Loons managed to tie things up in the third off of Eugenio Palma who entered to replace Montgomery. Much like their counterparts, Jacob Amaya added a sacrifice fly himself to tie things up 1-1. Enter Cam Sanders in the fourth who not only picked up the win but pitched five scoreless innings in the process to keep his ERA at 0.00 for the season.

As Sanders was keeping the Loons at bay, all he needed was one run of support in hopes of picking up the win. Look no further than the seventh inning when D.J. Artis picked up a sacrifice fly to plate the go-ahead and eventual winning run for the Cubs and a 2-1 lead. Riley McCauley entered in the ninth for his second save to move the Cubs to 7-6 on the year.