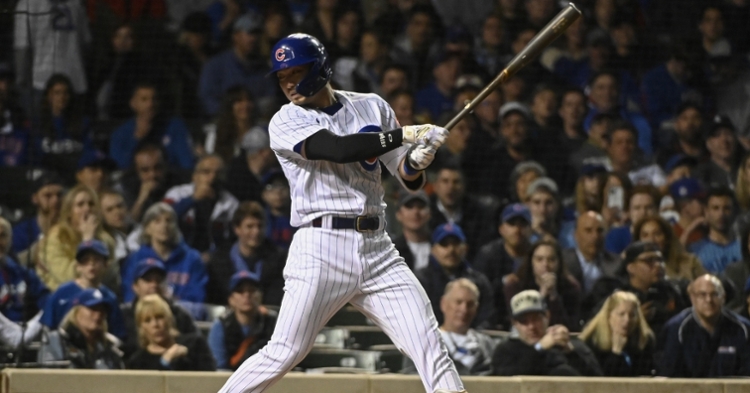 Suzuki has been impressive in 2022 (Matt Marton - USA Today Sports)

CHICAGO - A pitcher's worst nightmare when coming to Wrigley Field is having the weather warm up and seeing the outfield flags blowing straight out. After most of the spring's unseasonably cold weather in the midwest, there was finally a feeling of summer in the air, with temperatures hovering around 65 degrees and the wind blowing out.

Knowing the conditions, you had to think it would be an offensive game, and early on, the Chicago Cubs (6-7) were taking it to the Pittsburgh Pirates (6-7). However, neither the Cubs nor the Pirates could capitalize on the conditions, with the Cubs offense managing just four hits in the 4-3 loss.

Making his second start in place of the injured Alec Mills was Mark Leiter Jr, who continues to provide ok outings. Like in his first outing, Leiter Jr got through the order the first time with relative ease before getting touched up the second time through. He still managed to get through four innings, allowing just two runs on three hits. Opposing him was former Atlanta Brave Bryse Wilson, who went through his own struggles.

Wilson had a challenging time finding the zone walking four hitters across three innings of work. That ultimately led to the game's first runs, as he didn't have it. Rafael Ortega led the first inning off with a single before Wilson lost his command, walking three consecutive batters, including Frank Schwindel, to push home the game's first run. One batter later, it was Jonathan Villar driving one to left field as his sacrifice fly made things 2-0 Cubs in the first.

With Leiter Jr doing his thing in the early going, the Cubs continued to do their thing as scoring early has not been an issue this season. Singles from Patrick Wisdom and Nico Hoerner put the Cubs offense in business again before the Seiya Suzuki RBI groundout gave the Cubs a 3-0 lead after two. Little did they know that it would be the final run they would score as the offense went south, managing just one hit the rest of the way.

In the third inning, Leiter Jr finally ran into some trouble with Roberto Perez leading things off with a walk. A two-run shot followed that by former Cubs farmhand Daniel Vogelbach as the Pirates were within 3-2. Leiter Jr would allow two more base runners in that inning, but managed to keep the Pirates off the board the rest of his outing.

One thing the Pirates have going for them this season is a great bullpen with Wil Crowe entering the game in the fourth and starting to keep the Cubs in check. Looking to match the success of the Pirates pen was Ethan Roberts as the rookie was called on to pitch the fifth. Not only did a one-out Hoy Park double put him behind the eight ball, but a Vogelbach walk put two runners on with one out.

On the verge of getting out of the inning, Roberts Walked Ke'Bryan Hayes to load the bases ahead of the Yoshi Tsutsugo double, and just like that, the Pirates had the 4-3 lead. Scott Effross entered shortly after that and finished off the inning for the Cubs. With Willson Contreras picking up the last of the Cubs hits in the bottom of the fifth, it would be up to the bullpen to keep things close while the offense tried to figure things out on their end.

Whether it be Chris Martin, Rowan Wick, Mychal Givens, or David Robertson, the Pirates had no trouble putting runners on base as they kept the pressure on the Cubs all night. Give credit where credit is due, as the Cubs pitchers did a great job pitching out trouble, especially Wick, who induced an inning-ending double play after allowing a one-out triple to Bryan Reynolds in the seventh.

Givens followed that up in the eighth after allowing a pair of singles to Ben Gamel and Perez before striking out Kevin Newman to end the frame. Gamel had a monster game, going 3-4 at the plate. The turning point in the game came in the bottom of the seventh when Derek Shelton elected to bring in his closer David Bednar to face the teeth of the order. Not only did he take care of them in order before Chris Stratton came in to lock down the save, but Bednar managed to take out the Cubs best hitter in Suzuki on three pitches to help seal the 4-3 win. The loss drops the Cubs below .500 for the first time as the offense has gone into a bit of a lull.