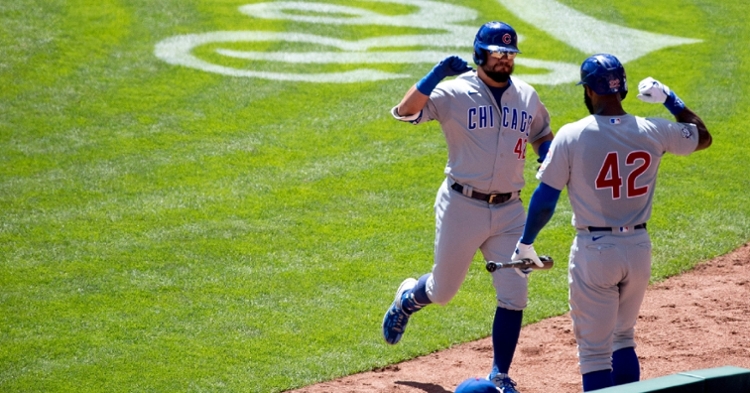 CINCINNATI — Homer-happy, to say the least, the Chicago Cubs (20-14) swung for the fences all afternoon at Great American Ball Park, and it paid dividends, as the North Siders powered out six home runs, including a grand slam, in a nine-run rout. Avoiding dropping their third straight series, the Cubs split their four-game set against the Cincinnati Reds (15-19), thanks to a 10-1 win in Sunday's series finale.

The Cubs' starting outfielders were responsible for each of the six dingers and made MLB history in the process. For the first time ever, all three starting outfielders went yard for the Cubs, which has never happened before in an MLB game. Ian Happ, Jason Heyward and Kyle Schwarber clubbed two home runs apiece, and Kyle Schwarber capped off the barrage of dingers with a ninth-inning grand slam. The feat also marked the first instance since 1955 that the Cubs had three players record multiple homers in a game.

T1: Looking for his first winning decision, Luis Castillo started on the bump for the Reds. He worked a scoreless first.

B1: Tyler Chatwood made his second start since returning from the injured list and sat the Reds down in order his first time out.

T2: Heyward drew a walk but was then outed at a second on a fielder's choice groundout that Jason Kipnis hit into. Kipnis then advanced to third on a two-out base hit by David Bote, who proceeded to steal second. Nico Hoerner grounded back to Castillo to leave Bote and Kipnis stranded, though. Bote's single was made possible by a hilarious blunder committed by Reds right fielder Nicholas Castellanos. The former Cub made an impressive diving catch but was unable to hold onto the ball when he raised up his glove in order to display the catch to the home plate umpire. Bote was credited with a hit.

B2: Chatwood produced another scoreless frame. Heyward helped his cause by robbing Jose Garcia of a hit with an impressive diving snag in right field.

T3: Three groundouts made up the bottom half of the third.

B3: With one out and a man on first, Chatwood called a trainer out to the mound after making a few erratic pitches. Chatwood left the game with what the Cubs later revealed to be right elbow discomfort. Colin Rea replaced Chatwood and kept the Reds off the scoreboard.

T4: Castillo entered Sunday's matchup having allowed just one home run all season, but he gave up two taters in a span of three at-bats in the etop of the fourth. Schwarber walloped a leadoff shot to right that provided the Cubs with a lead, and, two plate appearances later, Jason Heyward smacked a solo shot into the right field bleachers.

B4: Jose Quintana tossed a three up, three down fourth, in which he fanned two batters.

T5: Hoerner was hit by a pitch to lead off the fifth, and Happ, who played his college ball in the Queen City as a member of the Cincinnati Bearcats, then took Castillo deep on a two-run blast hit beyond center field. Castillo collected himself and struck the next three batters out.

B5: Quintana gave up a two-out double but escaped the inning without giving up any runs.

T6: Heyward became the first Cubs outfielder to tab his second long ball of the day, as he skied a solo shot to right off Robert Stephenson. The sixth-inning home run notched Heyward his first multi-homer outing since September of 2019.

B6: Joey Votto led off the bottom of the sixth with a drive out to center field. The homer off Quintana put the Reds on the scoreboard.

T7: Happ answered Votto's leadoff moonshot with one of his own, giving him two home runs on the afternoon. Stephenson was victimized by the solo bomb.

B7: Ryan Tepera walked three batters en route to loading the bases with two outs. Hoerner bailed Tepera out by pulling off a superb inning-ending catch at second. Hoerner's stellar grab prevented Castellanos from coming up with a critical two-out hit.

T8: Chicago failed to reach base in the top of the eighth.

T9: Bote drew a leadoff walk and stole his second base of the game. Anthony Rizzo and Javy Baez were walked with two outs, thus filling up the bases. Schwarber then came through with a monstrous 444-foot grand slam that sailed out to right. Three different players hitting multiple home runs in the same game is an MLB record that dates back to 1901, making the 2020 Cubs part of historic company.

B9: Duane Underwood put a bow on the nine-run romp by striking out the side. Quintana earned his first win of the season and now stands at 1-0. Castillo, on the other hand, is still winless, as he fell to 0-5 with the loss. The Cubs racked up 10 runs on eight hits, epitomizing the power of the long ball.