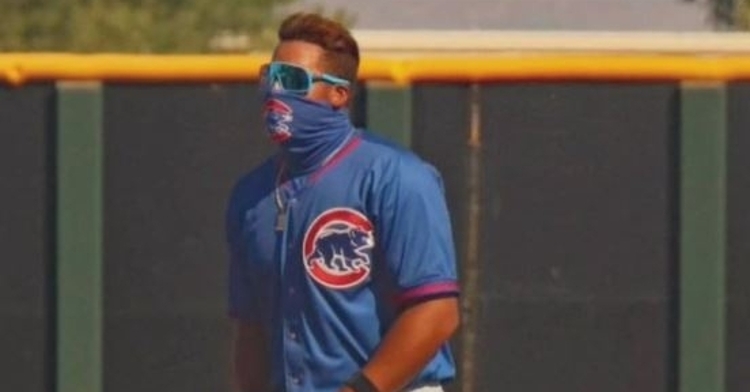 The more you dig into the Cubs farm system, the more you look at the overall potential of what is coming through that system. While most of the prospects are the names fans became familiar with in the full-season leagues, several sleeper candidates could rise in the rankings shortly.

One of those sleeper candidates is outfielder Felix Stevens. When you Stevens in person, you immediately get Jorge Soler vibes as he is a massive human being. At 6-4 and 225 pounds, Stevens has filled out his frame well, and at just 22 years old, he may not be done. There is a reason why scouts have compared him to Soler, and that mainly comes from a similar body type.

A Havana Cuba native, Stevens joined the Cubs in March 2019 after being signed as an international free agent.

Stevens was off to the Dominican Republic upon that signing, where he would begin his professional career in rookie ball. As a member of the DSL Cubs 2 team, Stevens played exceptionally well for his first taste of professional ball and had plenty of Cubs scouts loathing at the mouth for what he could do long term.

Stevens emerged as an everyday player seeing action in 51 games and tallying nearly 180 at-bats for the season. You couldn't have asked for much more from an average side of things as he gave the Cubs a .280 average at 19 years old. With that came impressive power where he connected for six homers and 31 RBIs as both of those totals ranked near the top in the DSL. While his command and overall patience of the strike zone needed some work, Stevens also swiped seven bases putting his full arsenal on display.

Typically when discussing DSL players, you give them two years before learning what they are about. That is not the case for Stevens, as he not only stepped up when called upon during his first season but also gave the Cubs plenty to think about where to put him in 2020.

Following a successful rookie season, the plan was to bring Stevens stateside for 2020 and further his progress on the developmental side of things.

That did not happen due to COVID, but Stevens went nearly a year without seeing game action. It wasn't until the instructional league in Arizona late in the year that Stevens stepped on a field again where he was looking to build off a great 2019. Although inconsistent at best, Stevens continued to show plenty of potential, leaving the Cubs with some tough decisions for 2021.

Knowing that he wasn't quite ready for full-season ball, Stevens returned to Mesa for the start of the 2021 season, where he landed with the ACL team. Across 30 games, Stevens continued to hit as his average hovered around .300, finishing off his summer in Mesa at .298. As if his six homers in 2019 were not impressive enough, Stevens went on to add seven more in the DSL to go with 25 RBIs.

If you average that out for an entire 162 season, Stevens was on pace for 38 homers and 125 RBIs, so there is plenty of power potential in that bat. While his 8BB/42K ratio is still a concern, it didn't scare the Cubs as they felt he performed well enough to land in Low A Myrtle Beach for the final week of the regular season.

Although his sample size was limited to five games, Stevens moved on to full-season ball, where he will most likely begin next season. Stevens struggled from an average side of things, going just 2-15 in those five games, which comes out to a .133 average. He also struck out five times with no walks as his low walk rate continued to be an issue. One of Stevens hits brought in an RBI, so he does have that to take away from his brief stint in full-season ball.

With 2021 in the rearview and the calendar flipping to 2022, Stevens has as much upside as anyone in the low-level minor leagues. From his Major League-ready body to an improving power stroke at the plate, the Cubs will expect a ton out of him this season, and rightfully so. Given that he will be entering full-season ball for the first time, expect some early struggles as Stevens tries to figure some more things out.

However, once he has an opportunity to learn from his mistakes, he could be a steal for the Cubs. In my opinion, they gave up on Soler way too soon. Depending on what happens with Stevens and his development, the Cubs have a chance to get Soler 2.0 and unleash him when they are ready.