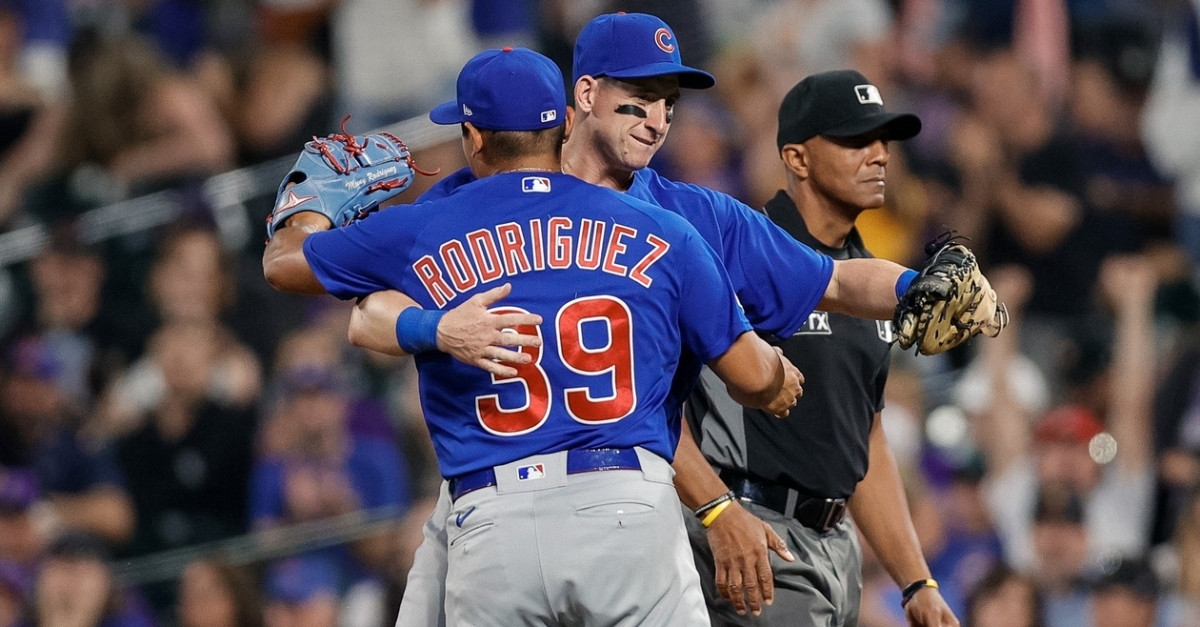 The more you dig into the Cubs system to find quality prospects, the harder it becomes to identify who is a real prospect and who isn't. That is the biggest challenge for any scout or GM, for that matter, as they spent their entire lives analyzing players who they think will become stars in this league. In most instances, those scouting reports are correct, but that doesn't mean a player will pan out.

After spending some time in the major leagues this season, several players on the Cubs prospect list are on the verge of being removed from that list. One of those names is flame-throwing reliever, Manny Rodriguez. A few years ago, a former top 30 prospect that checked in around 29 or 30, Rodriguez, has burst onto the scene the last few years and has treated Cubs with an eye into his potential.

A native of Mexico, the 25-year old fireballer has late-inning reliever written all over him if he can harness his command and pitch with more consistency start to finish. Rodriguez is no stranger to the Cubs system, having been a part of the organization since 2017. Before that, he was pitching professionally in the Mexican League as a teenager, where he flashed plenty of potential, making him a highly touted arm when he became an international free agent.

2014 saw him post an ERA north of 10.00 in just three games as that was his first taste of professional ball. One year later, Rodriguez showed improvement and became a workhorse out of the pen. Not only did he appear in 50 games in 2015, but through 49 innings. He posted a 4-0 record in relief, but what stood out was his 1.84 ERA as he dominated hitters.

Expecting another good year in 2016, Rodriguez hit some more bumps along the way posting a 5.06 ERA in just 15 games as that inconsistency continued to waver. That didn't seem to bother the Cubs as they not only signed him, but stashed him away at Eugene to begin the 2017 season. In his first taste with the organization, Rodriguez split between Eugene and South Bend, pitching a total of 16 games. He posted a 1-0 mark with a respectable 3.94 ERA while walking 11 hitters to 38 strikeouts.

Hoping to find out what he was made of in 2018, Rodriguez endured a horrendous season at South Bend, posting a 3-5 record with a 7.59 ERA across 32 games. Despite that, the Cubs wanted to continue moving him around, and it was off to Myrtle Beach for 2019. Sticking with the trend of inconsistency, Rodriguez was much better with the Pelicans going 1-3 with a 3.45 ERA across 35 games. His 17BB/65k is what stood out as he started to push himself into the top 30 conversations.

2020 was supposed to be a big year for him, and he came into the season part of major league camp while seeing time on the mound. He looked good in his brief stints on the mound, only to have a shoulder injury shut him down before COVID took the 2020 season entirely away. Eager to get back at it in 2021, Rodriguez once again spent time with the big league club during the spring before being optioned to AA Tennessee to open the season.

Although not the place he wanted to be, Rodriguez got to work and proved he deserved to be promoted. In 13 games with the Smokies, Rodriguez was tough, going 1-1 with a 2.03 ERA while recording four saves. His 10BB/19K was a bit concerning, but he limited the damage when in trouble. Later that season, it was off to AAA Iowa, where he continued to pitch well. In seven games with Iowa, not only did he go seven innings walking two and striking out eight, but he didn't allow an earned run as he seemed to be getting better.

That type of performance landed him a spot on the futures game roster, where he came and delivered. During his lone inning of work, Rodriguez allowed one walk during a shutout inning, but punched out two, including Tyler Soderstrom on a 99 MPH heater. As the season went on and the Cubs began to unload their players, Rodriguez got the chance to show what he could do as he was called up around the trade deadline.

When he arrived on the Northside, David Ross wanted to get him in as many games as possible as he saw action in 20 games. Granted, with just 17 2/3 innings of work, the results were not always pretty, but he got much-needed experience in what was otherwise a great season. With the Cubs, he not only posted a 3-3 mark but a 6.11 ERA as some of his outings were great, and some were bad. He added one save, 12 walks, and 16 strikeouts to his name.

This is where the consistency factor comes into play. When Rodriguez is on, he can be as tough as they come to hit. His sinking heater sits 97 MPH plus has excellent movement, and hitters hate when it rides in on them. To pair with that heater is a lethal slider that not only sits around 90 MPH, but comes with close to 40 inches of break, making it an absolute out pitch.

The consistency factor is still a concern as they need to see more consistency out of him. That alone will most likely keep him out of high leverage work for now despite the stuff. However, His stuff is impressive, and when it is on, he has closer potential written all over him. He is one of the pieces that needs to have a big 2022 if he wants to be part of this team's long-term plans.