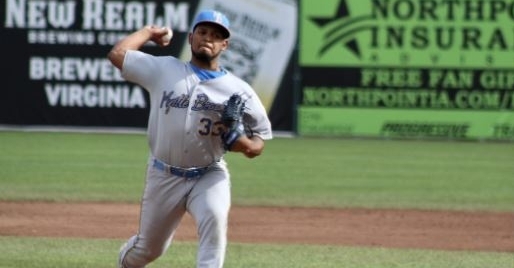 Part of having a successful franchise is having a solid minor league system to build for that future, and that is exactly what the Cubs have spent the last few years trying to do. Although the results in terms of the standings may not reflect that, this organization will have a sound farm system this season, so credit Jed Hoyer and Theo Epstein for at least rebuilding that before putting the team in the position they are in.

Of all the minor league teams, Myrtle Beach was one of the few teams that had success as they hovered around .500 all season. That may not seem like much, but when you look at the rest of the organization, they had the best record among the full-season teams, so there is that to take away. The Pelicans were one of those teams loaded with young talent that saw even more talent come through the organization as the season went on.

Most of that talent was on the offensive side of the ball, but the Pelicans still had some talented arms make an impact this season and will be worth following the next several years. One of those pitchers to watch is RHP Richard Gallardo, who showed plenty of potential in 2021. Signed as an International Free agent in 2018 from Venezuela.

The now 20-year-old right-hander took a little while to reach pro-ball, not throwing a pitch until the 2019 season at the age of 18. During that season,

Gallardo started the year with the ACL Cubs before finishing with short-season Eugene. Gallardo pitched 13 games in 2019, 10 of which were starts, and put up some decent numbers. He may have been 0-2 overall from a record side of things, but his 3.73 ERA and 14BB/25K ratio were impressive for an 18-year-old facing professional hitters for the first time.

Those results alone gave the Cubs plenty of hope as they felt he could emerge as a solid option. One year later, Gallardo was looking to take the next step in his development only to have COVID take away a season. That is never an easy pill to swallow, especially for a teenager who started to come into his own as the 2019 season went on.

With COVID still affecting the way things happened in 2021, the minor league season would go on, but would go on a bit delayed, meaning Gallardo and the rest of the prospects had to wait a few weeks later. Not only was Gallardo entrenched in the starting rotation, but he became the most trusted and durable starter they had, which is telling when you look at him at 20 years old.

From an innings side of things, Gallardo topped 91 innings, reaching that number in 21 starts. That meant that he averaged between four and five innings consistently when he took the mound, which is good for overall development. Once again, his record doesn't do him, just as his overall body of work was way better than what his record showed.

Gallardo struggled to win games for the season, posting a 3-9 record to go with a 4.53 ERA. Gallardo also saw his command improve a little bit where he walked 32 and struck out 75. Gallardo is not a strikeout pitcher at this stage in his career, but instead a pitcher who pitches to contact and uses the defense behind him to make plays.

He started to come into his own over the final five weeks of the season, where he had a four-start stretch that the organization would love to see more of. Over those four starts, Gallardo threw 20 innings, allowing seven earned runs. That translates to a 3.45 ERA, but his nine walks and 18 strikeouts were a concern during that stretch.

One of the shorter pitchers in the system, and he may have already maxed out physically in terms of what his body will look like. Still, he is an above-average athlete on the mound who has shown good command, with the potential of that command getting better. When he was first signed, Gallardo saw his fastball sitting in the 89-91 MPH, which is expected when you sign a teenager.

Two years later, Gallardo has seen a nice spike where he is now averaging 93-95 with that same heater. He has also added some sink to that heater, making it a more challenging pitch to square up. His secondary stuff needs some redefining, but that will be a massive part of what gets him moving through the system. His go-to secondary pitch is his power change-up that sits 85-87 with some sink. Gallardo also has an 82 MPH curve in his back pocket, but doesn't throw it enough to be considered a solid offering.

Given his age and where he is in his development, Gallardo has a long way to go, but has the potential to make some noise in the next few seasons. He is not someone that can be an ace for you, but look for him to be a No. 5 starter or an Alec Mills type of guy that you can use in different ways.