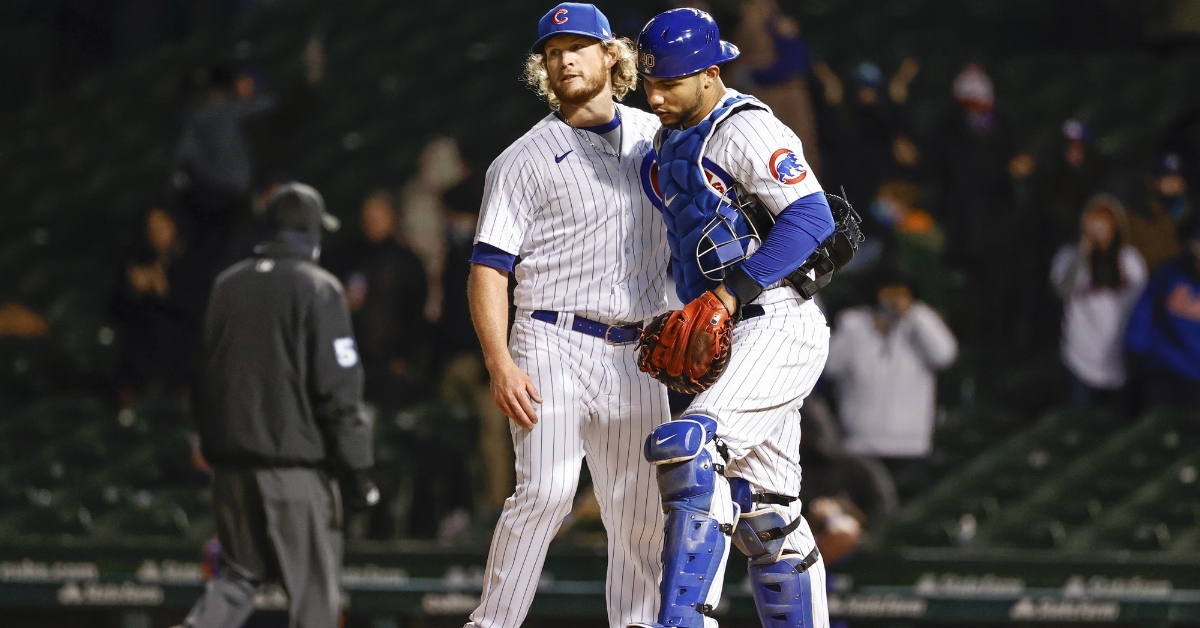 CHICAGO — A pivotal error and a two-out rally resulted in a Chicago Cubs (7-9) victory in the opener of a three-game series versus the New York Mets (7-5) on Tuesday. On a cold night at Wrigley Field, the Cubs mustered just four hits but were able to score three runs in a 3-1 victory. Jake Arrieta tossed five innings of one-run ball and earned a winning decision for the Cubs, while Taijuan Walker saw his start on the mound for the Mets unravel with two outs in the bottom of the fourth. Walker was ultimately given the losing decision.

Eric Sogard, who started in place of David Bote after he was scratched due to an upset stomach, drew a leadoff walk in the third and advanced to second on a sacrifice bunt by Arrieta. With two outs, Willson Contreras hit a routine grounder to third baseman J.D. Davis, who short-armed his throw across the diamond to first baseman Pete Alonso. Alonso was unable to scoop up the throw off a bounce, and Sogard scored from second as a result of the throwing error. Alonso nearly came up with a two-run homer in the next inning, but Joc Pederson caught it in the left field well.

With two outs in the fourth, Jason Heyward singled and stole second base, thanks to a swim move that enabled him to avoid being tagged. The Mets unsuccessfully challenged the safe call, and Heyward proceeded to score on an RBI base knock to center by Sogard. Arrieta, after shattering his bat during the course of his plate appearance, drew a walk, and a subsequent walk of Ian Happ loaded the bases. Willson Contreras drew the third straight base on balls, forcing home Sogard, and the Cubs took a 3-0 lead.

Walker was relieved after walking in a run and was ejected for arguing balls and strikes with home plate umpire Jon Libka while exiting the field. In the top of the sixth, Mets manager Luis Rojas was also ejected for voicing his displeasure with Libka. Following the pitching change, Anthony Rizzo struck out to end the inning and leave the bases loaded. Davis, who struggled defensively off and on throughout the game, redeemed himself for the error by leading off the fifth with a 432-foot moonshot that carried out to center field. Two other Mets reached base during the inning but failed to score.

After being pulled from the game, Taijuan Walker had some words for home plate umpire John Libka on his way to the dugout and was subsequently ejected pic.twitter.com/RSvuzA9FTj

Add Luis Rojas to the list of Mets unhappy with and ejected by home plate umpire John Libka pic.twitter.com/A4MteBrwwN

Another throwing error by Davis resulted in the Cubs putting a man on to begin the bottom of the fifth. However, Kris Bryant should have been called out on the play because he failed to touch the bag while running through first and did not touch the base until Alonso had already stepped on it with the ball in his mitt. Bryant was left stranded at first, though, and neither team placed a runner in scoring position again until the Mets did so in the ninth.

Craig Kimbrel walked leadoff man Jeff McNeil in the final frame but then struck out Davis. James McCann walked and former Cub Albert Almora Jr. pinch ran for him, leading to him hugging Rizzo in a touching moment at first. Luis Guillorme tallied the first hit given up by Kimbrel on the year with a single that loaded the bases, but Kimbrel collected himself and struck out Brandon Nimmo before forcing Francisco Lindor to ground out, thus earning him a save and locking up the 3-1 Cubs win. All three of the Cubs' runs on the evening were scored with two outs.