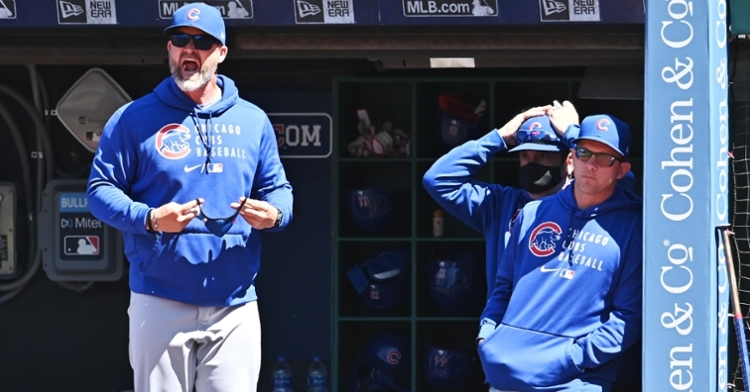 CLEVELAND — Going 1-for-15 with runners in scoring position and leaving a season-high 15 men left stranded on base was not a recipe for Chicago Cubs (17-19) success on Wednesday. As a result, the Cleveland Indians (20-14) won 2-1 in extra innings and completed a two-game sweep at Progressive Field. The Cubs wasted a solid performance in 5 1/3 innings pitched by Zach Davies and a four-hit showing by Willson Contreras and lost their third straight as a result.

Sam Hentges allowed two Cubs to reach base in the first inning of his first big league start but tallied two strikeouts in a row to usher in the bottom of the first. Davies got off to a rocky start by giving up a leadoff double to Cesar Hernandez. Eric Sogard then committed a fielding error that allowed Amed Rosario to reach base. However, the Tribe were unable to score in the opening frame. The Cubs once again put men on first and second with one out in the second but remained off the scoreboard. Two more North Siders reached in a scoreless third.

Double play groundouts ended the bottom of the third and both halves of the fourth. The bottom of the fifth also ended on a double play, but it was of the "strike 'em out, throw 'em out" variety, with Contreras firing to Javy Baez to catch a runner attempting to steal second immediately after Davies struck out a batter. A no-look tag applied by Baez concluded the fifth frame. Ildemaro Vargas doubled off Nick Sandlin with two outs in the sixth, and Bryan Shaw then gave up an RBI double to Joc Pederson, who tallied three hits on the afternoon.

Pederson's go-ahead two-bagger, which scored Vargas, broke the scoreless tie, but the Tribe tied the game back up in the bottom of the sixth. Hernandez led off with a double off the wall, and Rosario then drove him home with a double of his own. Davies was pulled following an ensuing groundout, and Justin Steele prevented the Indians from taking the lead. Third base umpire Stu Scheurwater did not help matters by failing to rule that Eddie Rosario went around on a defensive swing that he clearly went around on. Nevertheless, Steele struck Rosario out swinging soon afterward.

A: Of course it is, but 3B ump Stu Scheurwater didn't see it that way.@Cubs #GoCubsGo pic.twitter.com/M8PARgYEZF

Base hits by Contreras and Baez resulted in the Cubs having runners at the corners with two outs in the seventh. Kris Bryant, who did not start due to an illness, pinch hit at that point and was hit in the wrist by a pitch from Cal Quantrill. Bryant was subsequently removed from the game, and Nick Martini pinch ran for him. Jason Heyward proceeded to fly out, leaving the bases loaded. Contreras singled off Emmanuel Clase with one out in the ninth and then barked at the pitcher due to a pitch thrown near his head during the at-bat. Rizzo was intentionally walked after that, and two broken-bat groundouts followed.

Extremely sick KB comes in to pinch hit in the 7th and gets DRILLED in the left wrist and then removed from the ballgame.@Cubs #GoCubsGo pic.twitter.com/8zVk4A3FFq

Baez, who reached on a fielder's choice, confronted Clase on the mound, seemingly concerning the aforementioned elevated pitch thrown to Contreras, once the top of the ninth ended. Clase opted to avoid a conflict by walking away, and nothing else came of it. James Karinchak was wild early in his 10th-inning outing but was eventually able to control himself and toss a scoreless frame. Heyward drew a leadoff walk prior to Vargas bunting foul with two strikes. Pederson then skied an infield popup, which was followed by Sogard striking out looking.

Keegan Thompson pitched the bottom of the 10th and walked leadoff man Jordan Luplow. Rene Rivera then laid down a sacrifice fly that Rizzo charged across the infield grass afterward. The bunt was effective enough to advance both runners, with Rizzo opting to go for the surefire out at first. After an intentional walk loaded the bases, Hernandez popped up on the infield. Thompson was unable to escape the jam, though, as Amed Rosario smacked a walkoff RBI single to the opposite field, plating Josh Naylor and giving the Tribe a 2-1 victory.