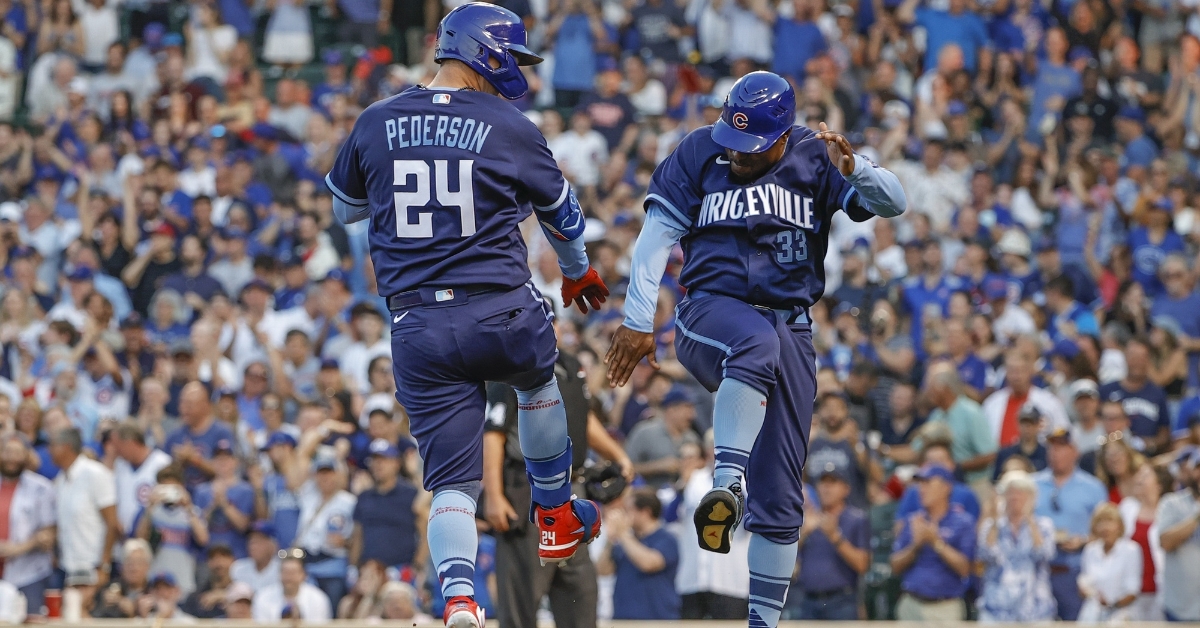 CHICAGO — Improving to a season-high 10 games over .500, the Chicago Cubs (37-27) homered three times and won their fourth straight on Saturday. On a warm, windless night at Wrigley Field, the Cubs, who wore their MLB City Connect uniforms for the first time, chased St. Louis Cardinals (32-32) starter John Gant from the game in the second inning and went on to win 7-2. Only 10 combined hits were tallied on the evening, and not a single run was scored after the fourth inning, as the Cubs did their damage at the plate early and cruised to victory the rest of the way.

After Kyle Hendricks and the aforementioned Gant both went 1-2-3 in the first frame, Nolan Arenado led off the second with a dinger to left. Hendricks then drew three consecutive flyouts, with Ian Happ catching all of them in center field. Anthony Rizzo lined out to begin the bottom of the second, but Gant proceeded to come unglued. He walked Willson Contreras and then gave up a two-run jack to Ian Happ, who sent a pitch over the wall in center.

Gant loaded the bases by walking three batters in a row and, following a Joc Pederson flyout, walked in a run with two outs. A base on balls drawn by Kris Bryant forced home Jason Heyward and chased Gant, who threw 65 pitches in just 1 2/3 innings, from the game. Jake Woodford relieved Gant and gave up an RBI single to Javy Baez, which scored Sergio Alcantara, before throwing a pitch in the dirt that bounced into Rizzo's knee. The hit by pitch pushed Hendricks across, putting the Cubs up 5-1. Woodford stopped the bleeding by forcing Contreras to pop out.

Hendricks was taken for another leadoff homer in the third, with Paul DeJong powering a 429-footer out to left-center. Woodford then recorded his first career single with a hit to right but was nearly thrown out at first by Heyward on the play. Hendricks later walked Dylan Carlson with one out, but both baserunners were left stranded. In the bottom of the third, Alcantara took Woodford deep by lofting a two-out solo shot into the right field seats. Joc Pederson smashed a leadoff bomb out to center in the bottom of the fourth, with Seth Elledge giving up the long ball.

Heyward reached base due to a fielding error committed by second baseman Matt Carpenter in the fifth but did not score. Hendricks dominated after giving up the two early home runs, giving up just three total hits in his six innings of work. Daniel Winkler tossed a scoreless top of the seventh, and the bottom of the seventh ended in "strike 'em out, throw 'em out" fashion, as Rizzo was gunned down at second by Yadier Molina. Alex Reyes struck Contreras out swinging, and Rizzo was subsequently for the first time in five tries this season. He was initially called safe, but a successful Cardinals challenge overturned the ruling and brought about an inning-ending double play.

Btm 7th - @Cardinals challenge call that Anthony Rizzo is safe at 2B; call overturned, runner is out. Powered by @Mitel. pic.twitter.com/zMm40iMZ48

Andrew Chafin was on the wrong end of a one-out double hit by Tommy Edman in the eighth. Edman tagged up and reached third on a flyout by Carlson, but Chafin then fanned Paul Goldschmidt. Trevor Megill, who was called up earlier in the day, gave up back-to-back singles to Arenado and Tyler O'Neill to start off the ninth. Following two straight popouts, a walk of DeJong loaded the bases with two outs and brought Craig Kimbrel into the game with a save on the line. Kimbrel wasted little time in forcing Edmundo Sosa to ground out, thereby wrapping up the Cubs' 7-2 win.