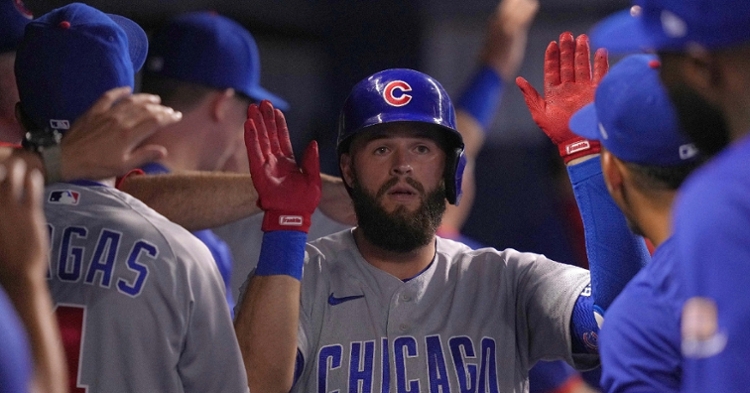 MIAMI — Similar to several of their recent losses, the Chicago Cubs (52-66) gave up a bevy of runs in one inning and paid the price for it on Friday, as the Miami Marlins (49-67) plated 11 runs in the second frame. The Fish overcame an early 4-1 deficit and led by as many as 10 runs at one point. The North scored five runs across the last two innings to make the final score of the four-plus hour affair a much more respectable 14-10, but the Marlins took the opener of the three-game series at LoanDepot Park. Racking up a season-high 18 hits, including four home runs, in the contest, the Cubs wasted a stellar offensive performance in the loss, their ninth straight.

David Bote put the Cubs up 2-0 in the first with a two-run jack off Jesus Luzardo. Matt Duffy opened the game with a leadoff walk and was plated via Bote's bomb. Miguel Rojas hit a leadoff single in the first and reached second on a groundout and third on an Adbert Alzolay balk. Jesus Aguilar scored Rojas on a groundout, but the Cubs quickly got the run back in the second when a leadoff walk drawn by Ian Happ was followed by Johneshwy Fargas smacking an RBI triple off the wall in right. Fargas came home on a Sergio Alcantara sacrifice fly, and Alzolay then swatted a double for his first career extra-base hit. Patrick Wisdom went on to strike out to end the inning with the bases loaded.

.@DavidBote13 crushes his 7th home run of the season. pic.twitter.com/GpKReXneIg

Bryan De La Cruz provided the Marlins with a lead that they held onto the rest of the way when he walloped a go-ahead grand slam with no outs in the second, scoring Brian Anderson, Jorge Alfaro and Alex Jackson. The 407-foot shot to left was followed by Alzolay being removed with a left leg injury a few at-bats later. Dan Winkler was roughed up on the mound. Isan Diaz singled off him and stole second not long before Lewis Brinson hit a double that plated Rojas and Diaz. Winkler then plunked Anderson and Alfaro in back-to-back plate appearances, with Alfaro's hit by pitch bringing Aguilar home. A passed ball suffered by Robinson Chirinos enabled Brinson to score, and Jackson then smashed a three-run homer to center. Jackson's 411-foot long ball plated Anderson and Alfaro.

Rex Brothers took the mound soon after Jackson went yard and finished the inning. However, he gave up a two-run shot to Aguilar in the third. Aguilar brought Diaz home with a 419-foot jack to left, placing the Marlins ahead 14-4. Chirinos hit a solo shot to left in the fifth, and Codi Heuer pitched a scoreless fifth, forcing Alfaro to ground into an inning-ending double play. Adam Morgan allowed a pair of batters to reach in the sixth but prevented the Marlins from adding to their lead. Upon leading off the seventh with a double, Chirinos was just a triple shy of the cycle. He advanced to third on a two-out infield single by Alcantara, but Andrew Romine then struck out.

After his gray glove caused a commotion involving the umpires, who seemed to think that it could be a distraction, Rowan Wick tossed a 1-2-3 seventh. Shawn Morimando gave up a leadoff single to Duffy in the eighth, and Frank Schwindel then crushed a 440-foot bomb out to straightaway center. Chirinos hit a double to the right field corner with two outs. He considered trying for three but held up at second. Although he was unable to hit for the cycle, Chirinos experienced a highly productive 4-for-6 night at the plate. David Hess took the mound thereafter, and Happ hammered a 439-foot jack off him, scoring Chirinos. Fargas and Alcantara then singled in consecutive at-bats, but Romine once again struck out to end the inning.

Manuel Rodriguez retired the side in order in the eighth, and Anthony Bender struck out the side in the ninth but not in order. Following a Duffy strikeout, Schwindel doubled and then scored on an infield single by Rafael Ortega. In a pinch-hitting appearance, Ortega swatted a burner that Aguilar was unable to handle at first. Ortega was credited with a hit, though, the Cubs' 18th of the game. Bender struck out Wisdom and Chirinos in the next two plate appearances, putting a bow on the Marlins' action-packed 14-10 victory, which featured 30 combined hits and seven combined home runs and served as the longest nine-inning tilt in Marlins history.