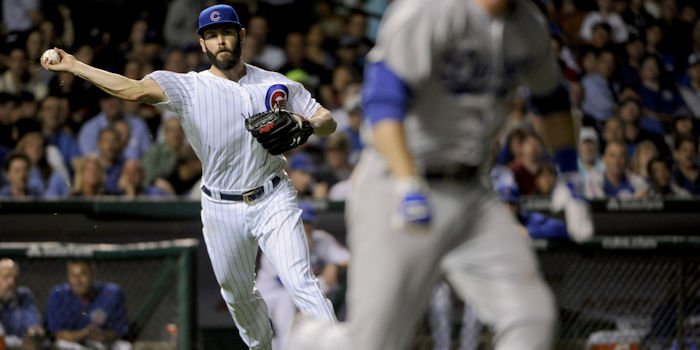 The Chicago Cubs (35-15) entered Tuesday night’s game at home against the Los Angeles Dodgers (28-25) having not lost a game in which pitcher Jake Arrieta got the start all season long. In fact, the Cubs had won 23 straight with Arrieta on the mound, a Major League record shared with former Atlanta Braves pitcher Kris Medlen. However, that streak came to an inglorious halt versus Los Angeles, as the Cubs failed to back up a gem of an Arrieta outing with any type of offensive production.

A good, old-fashioned pitching duel between the undefeated Arrieta and the proven Dodgers veteran Scott Kazmir, the game featured a glaring lack of hitting. Arrieta gave up only two hits and no runs, and Kazmir gave up a measly one hit and no runs. While Arrieta left the game after throwing 107 pitches through seven innings, he remained undefeated (9-0) on the year, despite the Cubs’ loss. Kazmir, on the other hand, was pulled after six innings and received a no-decision for his efforts.

The eighth inning served as Chicago’s downfall on the night, with reliever Clayton Richard, who is struggling mightily this season and sporting an ugly 8.00 ERA, giving up two runs and sinking the Cubs in the process. Dodgers second baseman Chase Utley singled to right to lead off the inning, and shortstop Corey Seager followed with an infield single. Young utility player Enrique Hernandez provided the heroics for L.A., though, coming through in the clutch with a pinch-hit single to left that scored Utley. Warren was then pulled, having given up a hit to each of the three batters he faced.

Reliever Adam Warren replaced Richard and was able to calm the storm a bit for the Cubs, only allowing one additional run to score via a sacrifice fly. But, after a three up, three down bottom half of the eighth for Chicago, the Dodgers put the game out of reach in the top of the ninth with a Seager three-run bomb over the right field wall. Seager was phenomenal Tuesday night, going 3-5 with two runs scored and the three RBI from the ninth inning home run. Dodgers reliever Joe Blanton, who was flawless in the bottom of the eighth, garnered a win for his efforts, moving to 3-2 this season.

Strangely enough, the Cubs’ 2-0 victory to open the series on Monday saw the victor amass eight hits and the loser only one. The same occurred on Tuesday, expect the tables were turned. This time, the Cubs were the ones who were impotent at the plate, with leadoff hitter Dexter Fowler’s single to right in the third serving as the team’s only hit of the night.

The loss ended a six-game win streak for Chicago, and, as Cubs manager Joe Maddon pointed out postgame, it definitely was not Arrieta’s fault. In the last two Arrieta starts that the Cubs lost, Chicago was no-hit and one-hit, which Maddon addressed when he told the media following the game, “It took a no-hitter and a one-hitter to beat Jake.”

The Cubs will look to bounce back at the plate tomorrow night in the third game of the four-game series with the Dodgers. Cubs starter Jon Lester (5-3) will duel Dodgers starter Mike Bolsinger (1-1), with the first pitch at 8:00 PM EST.

* The Cubs had had their six-game winning streak snapped ... they finished the month of May with an 18-10 record.

* The Cubs were shut out for the fourth time this season, three of which have come at Wrigley Field.

* The five-run setback marked just the Cubs third loss by at least five runs this season, tied for the fewest in the majors.

* Jason Heyward (0-for-4, SB) swiped his team-leading seventh base of the season.

* Anthony Rizzo (0-for-2, HBP) was hit by his National League-leading ninth pitch of the season.