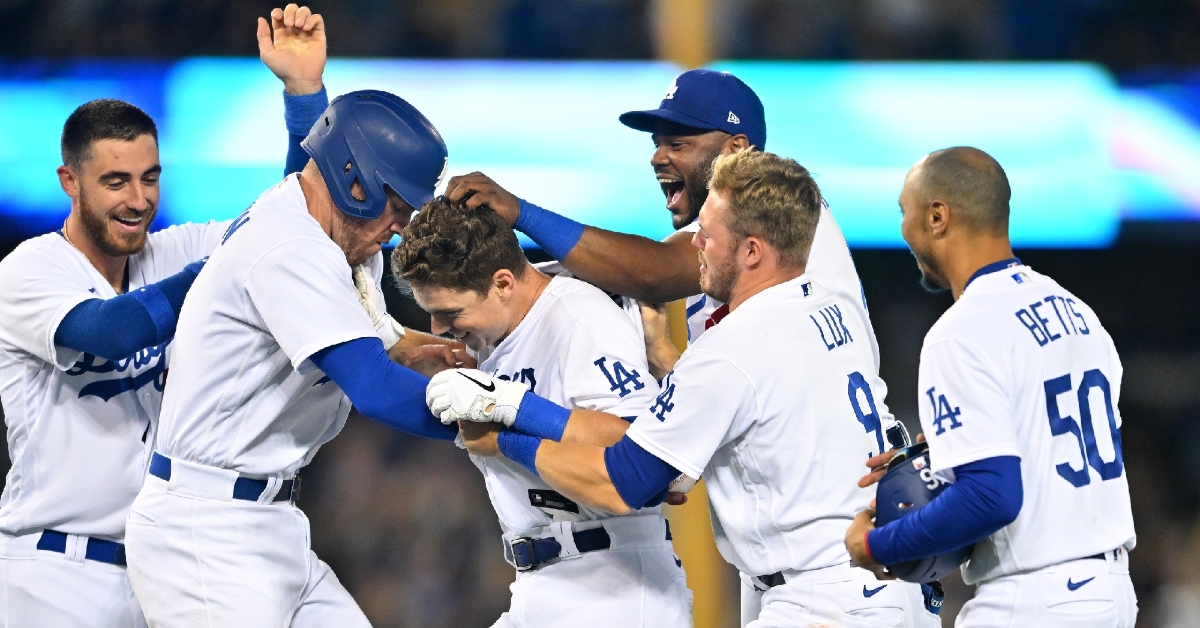 LOS ANGELES - The best part of a baseball season, especially a rebuilding season, is that it gives teams a chance to discover some unlikely heroes. For the Chicago Cubs (34-50), that unlikely hero has been right-hander Keegan Thompson. Ever since spring training began, Thompson has not only been the most consistent pitcher on the Cubs staff, but has been the best, and it hasn't been close.

That success translated to his early-season bullpen role, where he was lights out for most of the year. Once the injuries piled up in the Cubs rotation, Thompson was given the opportunity to start and hasn't looked back as he continues to carry this team. Following a 5 2/3 inning performance on Friday where he held the High-Octane Los Angeles Dodgers (54-29) offense to just one unearned run on two hits with eight strikeouts, there is no longer a question as to who the ace of this staff is.

Unfortunately for Thompson, he could not come away with the win on Friday as the Dodgers continue to show why they are the best team in the National League. Not only did they rally late off of David Robertson in the ninth, but they then walked off the Cubs in the ninth to send the Dodger Stadium fans home happy with a 4-3 win.

Thursday saw the Cubs face a potential Cy Young candidate in Tony Gonsolin. That was again the case on Friday as another Cy Young candidate was on the mound. It is an unlikely name having a breakout season as left-hander Tyler Anderson is having a career year. With a 9-1 mark and a 3.15 ERA following his seven-inning, it is impressive to see the Dodgers have two pitchers with a combined 20-1 mark this season.

Of all the pitchers in the Dodgers rotation, the Cubs have had the most success against Anderson, and that is going back to his Pittsburgh days, but for whatever reason, the Cubs haven't been able to hit him consistently this season. With two of his four strikeouts coming in the first inning, Anderson came out guns blazing and was ready to shut this offense down again.

Thankfully, it was Thompson who was able to not only match Anderson, but pitch better, as his high pitch count was his only undoing. Part of Thompson's growth as a starter is letting him work out of trouble which was the case in the second inning. After allowing a leadoff single to Will Smith, Thompson went on to walk Max Muncy before hitting a batter to load the bases with one out. He made the pitches he needed to make to get out of that jam and kept the Dodgers off the board.

That was the beginning of an impressive run for Thompson as he retired 11 straight hitters over the next three-plus innings to silence the potent Dodgers offense. It took four innings for the Cubs to grab their first hit, with Patrick Wisdom grabbing that, but they managed to crack the scoreboard first in the fifth.

Continuing what has seemed like a month-long hot streak, Nico Hoerner got the Cubs on the board first as he continues to build on a career-high in homers to make things 1-0. That lead continued to grow in the sixth, with David Bote and Christopher Morel picking up singles to begin that inning before Ian Happ emptied the bases with a double to make things 3-0.

Considering how strong Thompson was on the mound to this point, three runs seemed like a comfortable lead as the Dodgers needed offense in a hurry. With two down in their half of the sixth, Freddie Freeman picked up the second hit off Thompson as his double put him in scoring position. That was followed by an error that allowed for the Dodgers first run to score and spelled the end of the line for Thompson as he left with a 3-1 lead.

With the bullpen now in charge of holding down the fort, the Dodgers pulled within 3-2 in the seventh as Jake Lamb took Chris Martin deep for his first homer. Gavin Lux would add a two-out triple off of Martin in that inning before Scott Effross finished things off.

Still trailing in the eighth, it was time for the Dodgers to go to their pen as Yency Almonte retired the Cubs in order in the eighth. Mychal Givens matched Almonte by working around a two-out walk as the teams were heading to the ninth with the Cubs up 3-2.

Another scoreless frame for the Cubs sent the game to the bottom of the ninth, with Robertson on to secure his 13th save. One of the few bright spots in the Cubs pen this season, Robertson has had some recent issues, which carried over to Friday.

Justin Turner started the ninth inning off with a leadoff single before the walk to Lamb put the winning runner on first. Robertson battled through rare command issues as his one-out walk to Lux loaded the bases with one down. Robertson did a great job limiting the damage, but he did allow a game-tying Mookie Betts sacrifice fly to send things to extras, tied 3-3.

Unable to cash in during their half of the 10th, Rowan Wick was called on to pitch the 10th, hoping to turn around his rough season. It took just two batters for the Dodgers to come away with the win as Wick intentionally walked Freeman and then allowed the walk-off single to Smith to give the Dodgers a 4-3 win. With just five hits, the Cubs offense was tough to come by as Hoerner, Happ, Wisdom, Morel, and Bote had the hits.