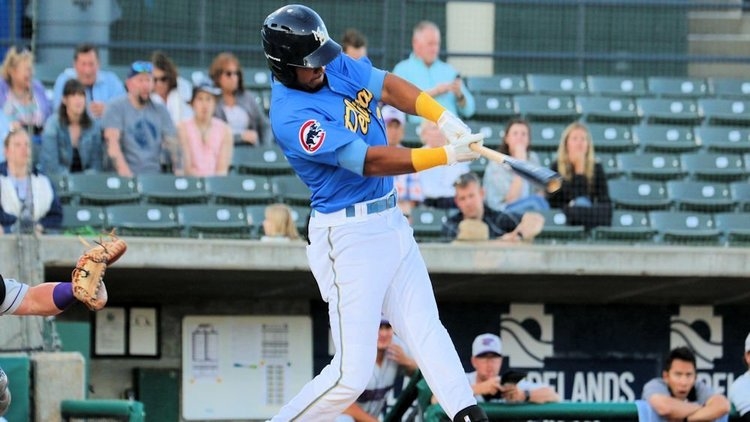 Kevonte Mitchell at the plate for the Smokies (Photo credit: Larry Kave)

The Cubs continued their .500 organizational record this week as once again it was a 2-2 night on the farm. However, the Cubs saw several strong performances from some new names as that too is just as important as the wins.

IOWA CUBS 7 – Round Rock Express 0: Alec Mills has been struggling mightily since coming off the IL to start the season. However, Mills may have gotten on track last as he tossed his best outing of the season in the 7-0 Iowa win. Mills was on a mission last night tossing six shutout innings of 2 H ball. He walked just two batters and put away six via the strikeout. The bullpen took over from there as the combination of Pedro Strop, Rowan Wick, and Dakota Mekkes allowed just one hit in their three-shutout innings.

The Cubs were in complete control from the second inning on as Taylor Davis put Iowa in front for good with a second-inning double and 1-0 lead. That lead continued to grow in the top half of the third when Ian Happ went deep for his eighth homer of the season, and third in his last ten games as his power stroke may be starting to come back. Mark Zagunis capped off the three-run third inning with a two-run double giving the Cubs a 4-0 through three.

Zagunis was just getting started on the night as had his best game of the season. With the score still 4-0 in the sixth as the offense stalled a little bit, it was Zagunis coming through again with his second double of the game stretching the lead to 5-0 Iowa. Now, seeing much more playing time since his return to Iowa, Davis picked up another RBI hit himself grounding a single into right field for the 6-0 Iowa lead.

After Robel Garcia stayed hot by crushing his sixth homer of the year in the seventh inning to make it a 7-0 Iowa lead, Strop entered the game to pitch as he is looking to finish his rehab assignment strong. Strop looks ready to go as he struck out one hitter in his perfect inning of relief as the Cubs downed the Express 7-0 in a high-powered matchup.

Iowa emerges victorious to improve to 33-22 slightly ahead of Round Rock and their 32-22 record. Garcia continues to swing a hot bat, going 3-4 to raise his average to .306. Phillip Evans, Zagunis and Davis all recorded two-hit games, while Happ is getting close to .250 following a 1-4 game. Strop has been perfect in his two relief appearances for Iowa.

A season-low three hits gives the I-Cubs their second shutout victory of 2019! pic.twitter.com/5kYy0Rnyd3

TENNESSEE SMOKIES 0 – Biloxi Shuckers 3: Looking for his first win of 2019, Justin Steele got the call hoping to pitch his way past a solid Biloxi team. Despite settling down after some early trouble, Steele (0-5) was only able to get through four innings in his start allowing all 3ER on 5H as the Smokies were shutout 3-0.

Biloxi took the lead immediately in the first inning as that run would prove to be the game winner. Luis Aviles Jr couldn’t have asked for a better start to the game as he led things off with a double. Three batters later it was Patrick Leonard coming through with two-out singles to put the Shuckers on top for good 1-0.

The Shuckers had a golden chance to bust things open in the second inning as Steele was in a significant early inning jam. Three batters into the second, Biloxi had the bases loaded on account of two singles and a walk. Looking for an inning-ending double play following a strikeout, Steele induced the ground ball he needed, but Aviles Jr. was able to beat it out for an RBI fielder’s choice and a 2-0 lead. The inning ended at home plate as C.J. Hinojosa was caught trying to steal home. 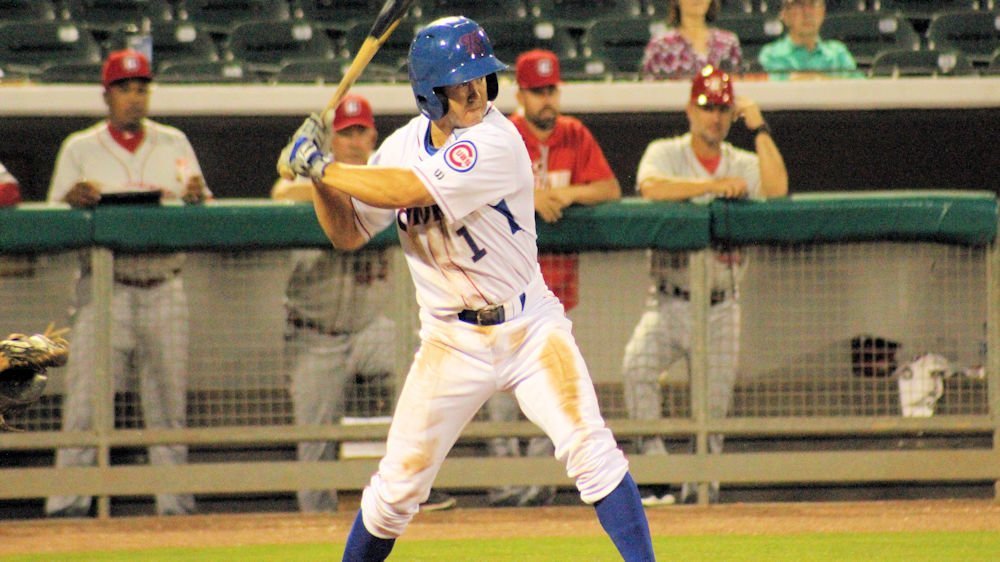 Command continued to be an issue for Steele in the third inning as a leadoff walk to Trent Grisham put a runner on base before a wild pitch moved him to second. After a single put runners on the corners with one gone, it was Weston Wilson ripping another single to plate a run for a 3-0 lead as the Shuckers continued to make hard contact. That would be all Biloxi would need as their pitching was more than enough to silence the Smokies.

On the verge of being no-hit, the Smokies entered the ninth inning with a goose egg in the hit category. Down to their final out in the game, Clayton Daniel broke the hearts of every Biloxi fan in attendance ripping a double to end the no-hit bid. Daniel was unable to score as the Smokies fell 3-0 to drop to 26-26.

Daniel, who is filling in nicely for injured Nico Hoerner, collected the lone hit as his average is .351 on the season. The Smokies put just one more runner on base via an error, as Trey Supak had them guessing all night. The Smokies bullpen was solid on the night, however, tossing four shutout innings with Jake Stinnett throwing two of them with five strikeouts.

MYRTLE BEACH PELICANS 8 – Potomac Nationals 0: The Pelicans finally showed up to play a complete game effort, as they dominated the Nationals start to finish for the 8-0 win. Getting the start was Erich Uelmen who couldn’t have done much better in this one. Uelmen (1-0) tossed six shutout innings allowing just 2H with 5K as his ERA lowered to 2.61.

Not known for scoring first this season, the Pelicans got off to a fast start plating a pair of runs in the first. Carlos Sepulveda followed the leadoff Zach Davis single with a single of his own to make it 1-0 Myrtle Beach. Two batters later Kevonte Mitchell smoked a double and just like that it was 2-0 after one.

The top of the order continued to wreak havoc, as they were responsible for seven of the teams eight runs in the game. Tyler Payne got in on the scoring action in the third inning, as his sacrifice fly made it a 3-0 Pelicans lead. With the bottom of the order setting the stage in the second after an Aramis Ademan single walks by Luke Reynolds and D.J. Wilson, Davis was able to stretch the lead to 6-0 as he reached on a throwing error by the pitcher clearing the bases in the process.

The scoring barrage continued into the fifth inning as the Pelicans now scored in three consecutive innings and four of the first five. Once again, it was the top of the order providing some thunder as Mitchell went deep for #8 on the season and the 7-0 Pelicans lead. The lone RBI from the bottom of the order came in the eighth inning as Reynolds picked up the sacrifice fly to make it 8-0 as the Pelicans picked up their first win in a while.

Myrtle Beach is now 19-35 as the 20-win mark is right around the corner. The top of the lineup was huge in this victory combining for six of the teams nine hits in the game with Mitchell responsible or three of those hits. Davis added two of his own, while Sepulveda, Ademan, Jimmy Herron and Wilson rounded out the hit chart.

Mama there goes that man!@_KevonteM had himself a night at the plate, and he is our @panerabread Bread Winner of the Game ?? pic.twitter.com/lpWtRHDOax

SOUTH BEND CUBS 1 – Lake County Captains 5: In the lone day game for the farmhands, the Cubs turned to Riley Thompson in the series finale hoping for a big series win over the Captains. It was not mean to be on this day as Thompson was roughed up in his five innings of work allowing 5R on 5H in the loss to fall to (3-3). However, the Cubs defense did him no favors as only two of those runs were earned, so his ERA hasn’t changed much sitting at 2.45 for the year.

After a scoreless first two innings of the game, the Captains began to time Thompson up, scoring all of their runs over the next three innings to chase him from the competition. Starting in the third inning, it was a home run getting Lake County on the board as Jesse Berardi went deep for his second of the season and 2-0 Captains lead.

The long ball continued to hurt Thompson in the third inning serving up a solo shot to Will Benson who extended the lead to 3-0. Benson is having a fantastic season at the plate as that as his 14th homer of the season. The Cubs defense let them down in the fifth as a potential scoreless inning ended up bringing home more runs for Lake County.

Beradi led the inning off with a double to put himself in scoring position. Hosea Nelson followed that up with a copper to Thompson who fired to third to get the lead runner. However, a dropped ball by Christopher Morel allowed both runners to be safe with Nelson moving up to second. The bad luck continued for South Bend a few pitches later as Jose Fermin reached on an infield single to load the bases with no outs.

Following an out, Thompson uncorked a wild pitch to bring the fourth run of the game home before Benson brought home another run with a sacrifice fly to push the lead to 5-0. South Bend was able to limit the damage to just two runs as things could have been much worse after that dropped ball.

Looking for immediate offense, the Cubs finally pushed a run across in the bottom of the fifth to end the shutout bid. Brennan Davis continues to be a sparkplug for the offense working a walk to lead things off. Edmond Americaan followed that up with a single, but it was a double play off the bat of Eric Gonzalez erasing two runners and ending a chance a big frame. The Cubs did manage to plate a run a few pitches later as a wild pitch allowed Davis to score to make it a 5-1 game.

South Bend had another excellent scoring chance in the eighth inning as Rafelin Lorenzo, and Delvin Zinn led things off with two straight singles. However, once again, the South Bend offense stalled as they were unable to push across more runs falling 5-1.

The loss drops the Cubs to 29-23 as they fall back to fourth in the division. Davis continues to be a considerable part of the offense collecting two hits and a walk to raise his average to .429. Jeffrey Passantino was impressive in his relief outing tossing three shutout innings with 4K, and 1H allowed to lower his ERA to 2.43.

Cubs drop the finale against Lake County and lose their first series at home this year. We'll head to Dayton to take on the Dragons tomorrow night! pic.twitter.com/hPszGNKE6H