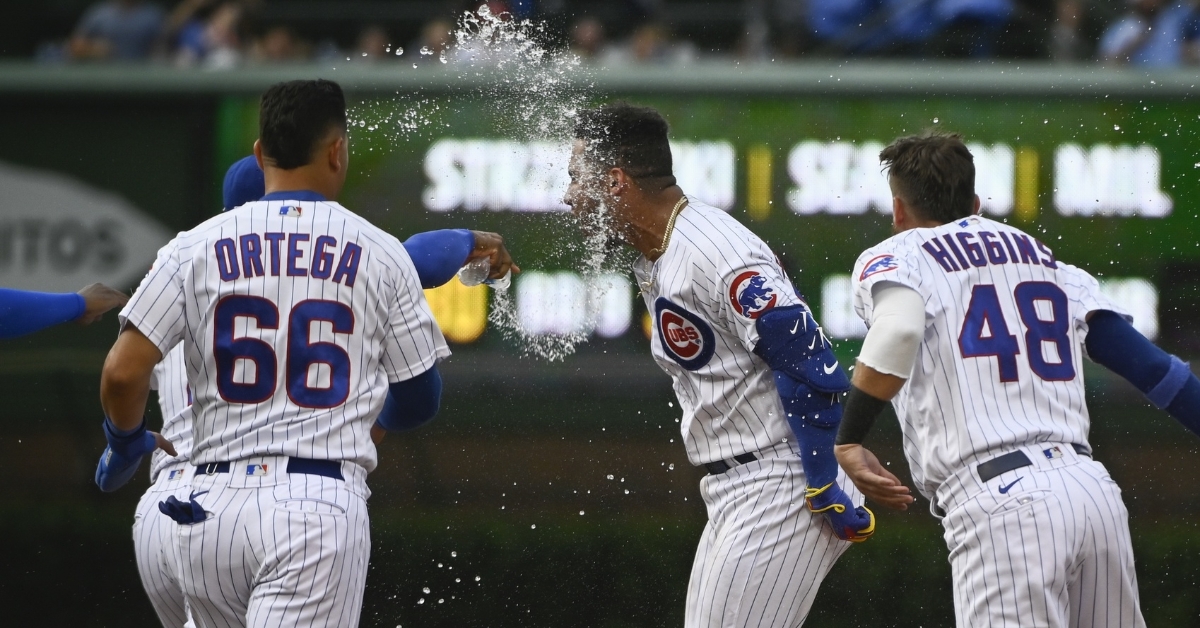 CHICAGO - It is amazing how much the weather can change at Wrigley Field from one day to the next. One day after the Chicago Cubs (52-67) and Milwaukee Brewers (63-56) were locked in a slugfest, things were completely different Saturday as mother nature completely changed the elements.

Not only did rain delay the start of the game, but fans saw Marcus Stroman and Freddie Peralta locked in a pitcher's duel that saw things tied 3-3 after nine and extra innings set to begin. In the extra frames, the Cubs managed to pick up the win as Willson Contreras delivered the walk-off single to hand the Cubs their fifth straight win. This was also the fifth consecutive series the Cubs have won as they continue to play since the all-star break.

Wins and losses are the most overrated stat when talking about starting pitchers, and Marcus Stroman can attest to that. Despite his below .500 record, Stroman has a 3.83 ERA which is closer to 3.1 since the beginning of June. He was dealing on Saturday afternoon, getting through 7 2/3 innings and allowing two runs.

The first of those runs came in the first inning when Andrew McCutchen put the Brewers in front with an RBI groundout, but the right-hander was brilliant outside of that. Despite giving the Cubs his best outing of the season, Peralta was equally as good, and you could argue that he was even better than Stroman in the early going.

Peralta lasted only six innings, but gave up two runs, with two of the runs coming across in the fifth inning. The Cubs had a chance to break through in the third inning with a pair of singles, but Peralta managed to pitch around that jam to keep the Brewers in front. He wasn't that lucky in the fifth inning as the Cubs finally got to Peralta in that fifth inning.

Zach McKinstry led things off with a walk, but with two outs, the Cubs were again in danger of not scoring. That was until Contreras changed all that with one swing taking a Peralta pitch over the left-center field fence and putting the Cubs in front 2-1. With Stroman continuing to silence the Brewers after the first inning, that 2-1 score looked like it would hold up with the Brewers coming to bat in the eighth.

With two down in the eighth, Christian Yelich picked up a single, which ended the night for Stroman. With David Ross going to the pen, it was Rowan Wick who Ross called on, and he quickly put the Cubs in a 3-2 hole as Willy Adames took Wick deep to put the Brewers back in front. Wick got out of that inning without further damage before Michael Rucker pitched a scoreless ninth for Chicago.

Still trailing by one and down to their final at-bats, the Cubs were hoping to rally, but would have to do so against one of the game's best relievers in Devin Williams. Known for excellent command and a lethal change, the Cubs kept the pressure on with Patrick Wisdom and Rafael Ortega picking up walks to put the tying run at second and the winning run at first.

Down to their last strike and on the verge of losing, Nick Madrigal came through with arguably the biggest hit of his season as the RBI single brought things back to even and sent the game into extras, tied 3-3. With Steven Brault on to pitch the 10th, Milwaukee retook the lead on the first batter with Mike Brosseau delivering the RBI single.

Milwaukee would load the bases with a hit by pitch and a walk later in the inning, but came away without any further damage, which gave the Cubs an excellent opportunity to strike back. Needing one run, Ross chose to be aggressive and saw Ian Happ steal third. That proved beneficial as Franmil Reyes delivered the game-tying sacrifice fly to send the game to the 11th tied 4-4.

Like in the 10th, the Brewers managed to push across the go-ahead run with Kolten Wong picking up the go-ahead RBI fielder's choice to make things 5-4. The Brewers continued to keep the pressure on, but Erich Uelmen was able to get out of the inning without allowing another run to put things back in the hand of the Cubs offense.

Not only did Chicago score off of Williams in the ninth, but they then pushed across another run against Taylor Rodgers in the 10th, as that were two massive feats. Knowing that Craig Counsell had a big decision to make and he went with Anthony Strzelecki to pitch the 11th in hopes he could lock things down.

Two pitches into his outing, things were tied once again as Wisdom laced an RBI double to make things 5-5. PJ Higgins followed that up with a perfect sacrifice bunt to move Wisdom to third, while an intentional walk helped set up the double play. Despite Madrigal hitting one on the ground, he avoided the double play, but Wisdom was thrown out at home, keeping things tied.

That set the stage for Contreras, and he did what Cubs fans have been waiting for, taking the 2-2 pitch and lining it the other way for an RBI walk-off single as the Cubs continue to play great baseball and knocked off the Brewers again 6-5.

Willson walks it off! ?? @Cubs pic.twitter.com/O1Lq8R7oX8

At some point, the Cubs will have to decide on Contreras, and it is pretty clear that he should be extended. Contreras had two of the team's eight hits in the ballgame, while the Brewers managed just four. Madrigal led the way with three more hits and is now hitting .260 on the season.