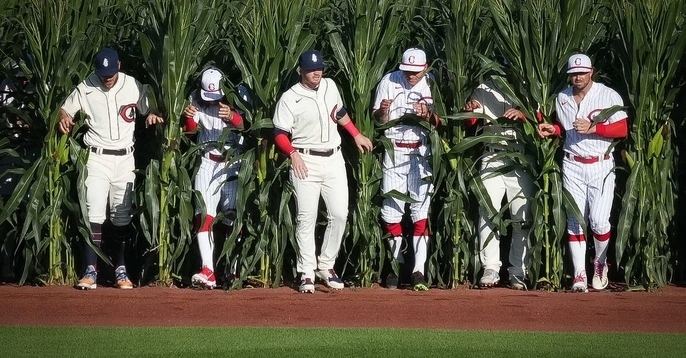 DYERSVILLE - Is this Heaven? No, It's Iowa, as in Dyersville, Iowa, home of the Field of Dreams, where the Chicago Cubs (46-65) and Cincinnati Reds (44-67) went to battle for the second annual field of dreams game. Despite not having the same mystique as the inaugural game last season, this was still a once-in-a-lifetime moment that these players will never forget.

From Ken Griffey Jr, asking his father if he wanted to have a catch to the players entering the game through the corn still brings chills as this is what the great game of baseball was meant to be like.

The Griffeys have a catch and start a movement: pic.twitter.com/W8r8NaJgId

After all the pregame festivities came to a close, there was still a game to be played in which the Cubs came out on top 4-2.

Coming off an excellent outing last time out against Miami, veteran left-hander Drew Smyly took the ball as he opposed rookie left-hander Nick Lodolo. Despite needing 91 pitches to get through five innings, Smyly was brilliant and delivered what is arguably his best start of the season.

Across those innings, Smyly not only allowed just four hits, but he held the Reds scoreless and left with a comfortable lead. Smyly walked two, but struck out nine as his ERA fell to 3.69 in what has been a very good stretch for him.

Lodolo, on the other hand, is still trying to come into his own as most rookies do, and it has become a start-by-start basis.

In 4 2/3 innings, Lodolo not only allowed four runs on seven hits, but walked four batters to go with six strikeouts. Most of the damage done off of him came in the first inning as the Cubs raced out to a massive lead and didn't look back.

With Nick Madrigal and Willson Contreras being retired to open the game, Lodolo hit Patrick Wisdom, extending the inning for the Cubs. Not only did that hit by pitch extend the inning, but it paved the way for three-straight two-out hits, which led to three first-inning runs and a 3-0 lead. Seiya Suzuki was the first to connect with an RBI single to center before coming on the Nico Hoerner flare to left.

Two pitches later saw Ian Happ rip his 30th double of the season to center field, and just like that, the Cubs were off and running early.

Chicago @Cubs OF @ihapp_1 joined our broadcast and talked about how driving through the corn fields to the Field of Dreams reminded him of his days playing summer ball in the Midwest as a kid ??

Looking to battle back in the first, the Reds had something going against Smyly as a leadoff hit by pitch, and one out single put a pair of runners on base only to come away empty.

One inning later, the same story as Albert Almora Jr, worked a leadoff walk to start the inning off Smyly before Aristides Aquino ripped a single to put a pair on with no outs. Not only did Smyly work out of that jam, but he retired the next five hitters before another mini jam in the third inning went by the wayside.

Moving to the fourth and it was the Cubs offense that started to come to life again, with Nelson Velazquez and PJ Higgins starting things off with singles. Two batters later saw Nick Madrigal cash in with another RBI as he is starting to look like the 2021 version of himself. The Cubs continued to keep the pressure on in the fifth as one-out walks to Suzuki and Hoerner gave the Cubs more baserunners, only to have them stranded this time around.

With this now becoming a game of bullpens, Michael Rucker was the first out of the pen for Chicago as he tossed a scoreless sixth before running into some seventh-inning trouble. Not only did Rucker allow a leadoff double by Jose Barrero, but a Jake Farley walked followed that to give the Reds a pair of baserunners and no outs. Three pitches later saw Matt Reynolds put an end to the shutout bid as his RBI double to right not only made things 4-2, but put the Reds in position to score more with Brandon Hughes entering the game.

Hughes not only did what he needed to do to get out of the seventh, but then turned right around to pick up a pair of strikeouts in the eighth. Hoping to add some late-game insurance runs, Madrigal led off the ninth inning with his third hit of the day before moving to second on the Wisdom walk. A pair of strikeouts later, Hunter Strickland was out of the inning as the Reds were down to their final at-bats.

With Rowan Wick on to pick up another save, the right-hander continued his dominant stretch of games. In roughly 20 pitches, Wick got through the Reds lineup, picking up a pair of strikeouts and another save in the Cubs 4-2 win. The win not only keeps the Cubs in third place, but they are now 12-8 since the all-star break and since then have the second-best record in the Central Division.

Madrigal has suddenly raised his average to .250, as he led the Cubs offense with three hits.

Nick Madrigal brings in another one for the @Cubs as they extend the lead to 4-0!

Happ added a pair of hits, with nearly every player in the starting lineup grabbing one.