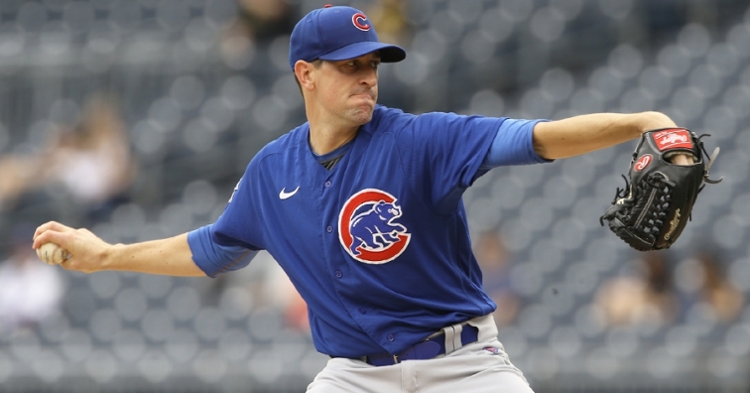 PITTSBURGH - After playing well over their first four games, the Chicago Cubs (3-2) had their first clunker Wednesday at PNC Park. It came against the Pittsburgh Pirates (2-3), a team that many feel will be one of the worst teams in baseball again this season.

Record and expectations aside, the Pirates have given the Cubs fits the past two years despite the Cubs owning them in the wins and loss column. Kyle Hendricks was looking to duplicate his first start of the season as he took the ball against Zach Thompson. Unlike in his first start, Hendricks was not on top of his game as a lack of command saw him walk a career-high four batters in 3 2/3 innings of work.

Give the Pirates and their offense approach credit for that, as they made him work for everything on the round. Not only was the command an issue for Hendricks, but so was hard contact, as Hendricks allowed six runs in just 3 2/3 innings of work. When your offense is quiet for a second straight game, that becomes an uphill mountain to climb as the Cubs fell 6-2.

One thing the Cubs have done a better job of this season is scoring in the first inning to back their pitcher. That was again the case on Wednesday, with Willson Contreras getting every bit of the Thompson pitch and crushing it 453 feet to dead center for the 1-0 lead. It was a much-needed hit for Contreras after scuffling the last few games as Hendricks had an early lead.

Hoping to respond in the bottom of the first, Daniel Vogelbach and Ke'Bryan Hayes picked up singles, but a double play earlier in the inning had Hendricks on the verge of getting out of the jam. Following a Yoshi Tsutsugo walk, Cub killer Ben Gamel proved that a new uniform can bring the same results as his three-run shot gave the Buccos the lead for good 3-1.

Hendricks seemed to be figuring things out after a solid second inning, but a one-out double from Hayes in the second, who went 4-4 on the afternoon, put the Pirates in business again. Gamel worked a walk later in the third inning, putting two runners on with two outs which set the stage for Kevin Newman and his triple, extending the lead to 5-1.

It took four innings for the Cubs to finally put something together off Thompson, which started with a ground-rule double from Contreras. Following an Ian Happ walk to put a pair of runners on base, Seiya Suzuki continued his torrid start to the season as he flared an RBI single to center to make things 5-2.

Looking to keep the Cubs close, Hendricks was knocked around again, getting pulled before the inning was over in favor of Michael Rucker. Before that, Hendricks allowed a Hoy Park walk and singles to Vogelbach and Hayes, with Hayes picking up the RBI to make things 6-2.

Give the Cubs bullpen a ton of credit as they didn't allow a run over the final four-plus innings, which started with Rucker putting together 2 1/3 of those innings. For the Cubs to get back in the game, they needed to capitalize when they had chances, and the fifth inning was the chance they needed.

Despite his 1-4 day, Jonathan Villar made solid contact all game and was rewarded with a single in the fifth. One batter later, Nico Hoerner smoked one up the middle and hit Thompson in the back, putting a pair of runners on base. That also spelled the end for Thompson, who recorded a trio of strikeouts in his four innings of work.

Frank Schwindel added a walk later in the inning to load the bases with one down and Contreras coming to bat. Despite picking up two hits earlier in the game, Contreras couldn't cash in here as his double play ended the frame with the Cubs still down four.

With Rucker doing his part out of the pen, it was up to Rowan Wick and Scott Effross to follow as they needed to keep things right where they were. In the seventh, Wick ran into a bit of trouble, allowing a hit to Hayes and a walk to Tsutsugo, but managed to strike out Gamel to end the inning without further damage.

Effross came in to pitch the eighth and needed just 11 pitches to retire the side in order striking out a pair in the process. Unfortunately, the Cubs offense couldn't pick up the slack as an eighth-inning Schwindel single, and a ninth-inning walk by Suzuki were the lone base runners after the fifth inning as the Cubs fell to Pittsburgh 6-2.

Chicago will continue their road trip by heading out west for a four-game set with Colorado. Contreras led the way for Chicago, picking up two of the team's six hits to go with that homer.