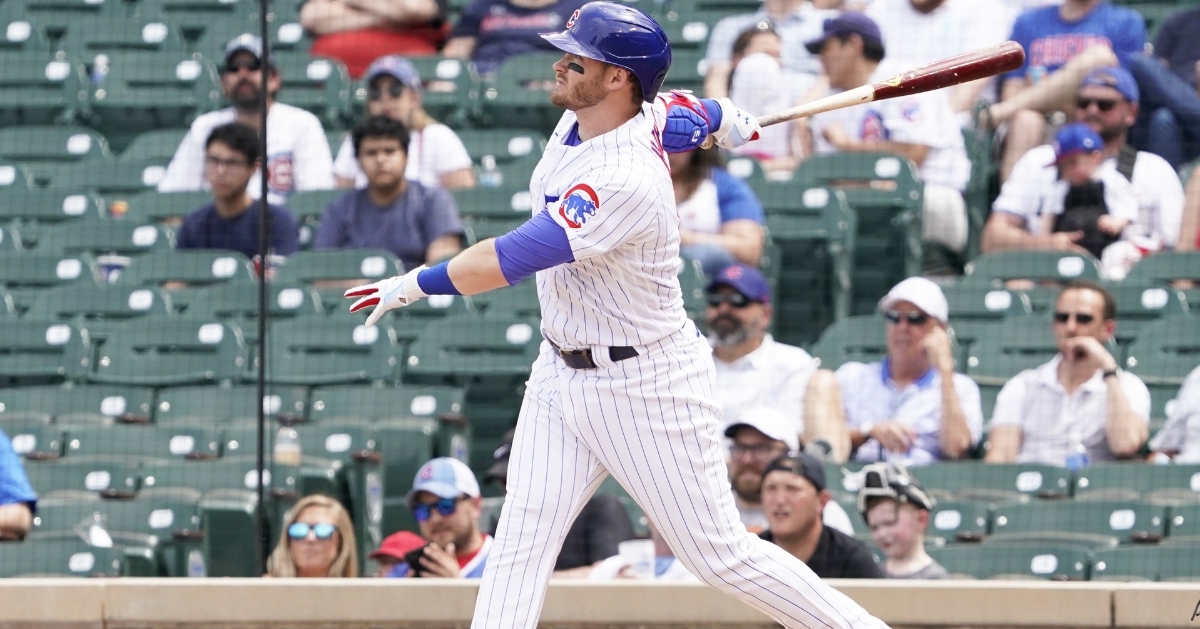 CHICAGO — A pair of home runs off the bat of Ian Happ highlighted a successful comeback effort by the Chicago Cubs (22-21) in the finale of a four-game series at Wrigley Field versus the Washington Nationals (17-23). The Cubs fell down 2-0 in the top of the first, with Trevor Williams giving up a pair of solo dingers, but outscored the Nats 5-0 the rest of the way on Thursday. With the 5-2 win, the Cubs took 3-of-4 in the series.

Williams was shaky out of the gate, even after forcing Juan Soto to ground into a double play in the game's second plate appearance. Josh Bell, a former teammate of Williams' with the Pittsburgh Pirates, and Kyle Schwarber, a former Cub, slugged back-to-back solo shots in the first frame, providing the Cubs with an early deficit. Anthony Rizzo started after missing the previous game with a back issue. He was plunked by Joe Ross in the bottom of the first but was left on base.

Ruth did it on hot dogs and beer.

David Bote and Nico Hoerner tabbed consecutive singles to begin the bottom of the second, and Nick Martini, who was called up earlier in the day to replace an injured Jason Heyward on the active roster, then plated Bote from third with a sacrifice fly. Making his first big league start behind the plate, P.J. Higgins gunned a throw to Javy Baez as part of a "strike 'em out, throw 'em out" double play in the third. Moments after Soto struck out swinging, Trea Turner was tagged out on a steal attempt for the first time on the season.

Former Cub Starlin Castro botched what should have been an inning-ending play in the third, and the Cubs took advantage. After the third baseman booted a grounder hit by Baez, who proceeded to steal second, Happ took advantage of Castro's two-out fielding error by lining a two-run homer into the basket atop the wall in the right field corner. The go-ahead blast put the Cubs up 3-2, and the North Siders did not relinquish their lead.

Ross walked Martini with one out in the fourth and went on to give up a two-out single to Williams. Joc Pederson smacked an RBI base knock up the middle, scoring Martini and chasing Ross from the game. Sam Clay entered to pitch and gave up a single to Rizzo that loaded the bases before Baez hit a comebacker that left the three runners stranded. Josh Harrison led off the fifth with a double, and Justin Steele relieved Williams soon afterward. Steele walked Soto, the first batter he faced, before forcing Bell to ground out and end the half-inning.

Happ led off the bottom half of the fifth with a 404-foot jack out to center field. Austin Voth gave up the round-tripper, which resulted in the final run of the day coming across. Another error by Castro — this one of the throwing variety — enabling Higgins to reach as the leadoff man in the sixth. Higgins was then thrown out at second when Steele laid down a bunt. Pederson and Rizzo each singled to load the bases with one out, but Baez grounded into aa 5-3 double play that enabled Castro to redeem himself.

Steele, who tossed a 1-2-3 sixth, was pulled due to right hamstring tightness after being evaluated by a trainer on the mound prior to the start of the seventh. Running the bases in the heat likely caused Steele's injury. Ryan Tepera replaced Steele on the bump and struck out the side swinging in the top of the seventh. For the second time in the series, Hoerner made a great diving stop at second base with Andrew Chafin pitching. Both plays were inning-ending web gems, and Thursday's occurred when Hoerner outed Bell after laying out to glove a grounder he hit in the eighth.

Joc Pederson seemed to be experiencing cramping issues to his abdominal region during his eighth-inning at-bat. He remained at the dish, though, and ultimately lined out. He also retook his position in left field in the ninth inning, which saw Craig Kimbrel close out the game with three strikeouts. Castro, who singled with one out in the final frame, served as the lone baserunner of the ninth. With the win, the Cubs improved to 5-2 in their last seven outings.