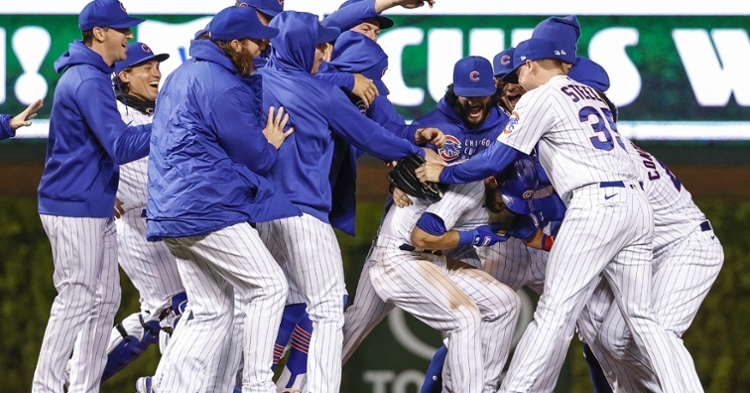 CHICAGO — Completing a sweep of a day-night doubleheader, the Chicago Cubs (14-16) won in walkoff fashion on Tuesday evening, with David Bote driving in the winning run with a base knock in the bottom of the ninth. The nine-inning affair between the Cubs and Los Angeles Dodgers (17-14) was an extra-inning contest, as it came in a seven-inning doubleheader matchup, and the thriller featured plenty of late-game excitement at Wrigley Field. Javy Baez kept the Cubs alive with a game-tying two-run homer in the eighth, and Bote's walkoff single occurred in the next inning, lifting the Cubs to a 4-3 victory.

Keegan Thompson made his first big league start on the mound for the Cubs and worked himself out a first-inning jam after giving up a double and issuing a walk in the first two plate appearances of his outing. Trevor Bauer, an archenemy of Cubs fans, started on the bump for the a struggling Dodgers team that, entering Tuesday night's game, had lost 11 of its last 15 games since starting the season 13-2. In the bottom of the first, Bauer worked himself out a jam that began with former Dodger Joc Pederson drawing a leadoff walk. Kris Bryant doubled off Bauer in the third but did not score.

Thompson's solid appearance ended in the fourth with two outs and a runner in scoring position, and Rex Brothers entered to pitch and recorded an inning-ending strikeout. Jason Heyward proceeded to lead off the bottom half of the inning with a go-ahead home run to right. Pederson was hit by a pitch later in the frame, which loaded the bases with two outs. Bauer escaped a sticky situation once more by striking out Bryant. Anthony Rizzo led off the bottom of the fifth with a triple, but, after Bauer was relieved, he was tagged out at home when attempting to score on a grounder hit by Heyward to first.

The Dodgers' infielders opted to shift to the right with Eric Sogard leading off the bottom of the sixth, and Sogard took advantage by smacking a chopper hit to the left side, which resulted in a single. A few at-bats later, a fielding error committed by Edwin Rios loaded the bases with no outs. Blake Treinen worked himself out of the pickle, though, by drawing an infield popup off the bat of Pederson and striking the next two batters out.

In the seventh, Max Muncy tied the score at 1-1, thus handing Craig Kimbrel his first blown save of the season, by hitting a towering solo shot into the basket atop the wall in right-center field. A broken-bat ground ball hit by Ildemaro Vargas, who made an excellent defensive stop earlier in the game, resulted in a double play that ushered in extra innings. With Rios on third in the eighth, Dillon Maples threw a wild pitch that enabled Rios to score. Justin Turner followed that with a moonshot to left. When the Cubs were down to their final out in the eighth, Baez extended the contest by slugging a two-run no-doubter off Mitch White. Vargas was plated by the clutch dinger.

Shoot for the stars, aim for the moon. pic.twitter.com/zhGnKyWwP4

Justin Steele pitched a scoreless ninth and was fired up as he left the mound, and the tilt ended soon afterward. Bote started at third base on the night and showed out at the hot corner throughout the matchup, pulling off several impressive defensive plays. It was Bote's batting that won the game for the Cubs, however, as he ushered Bryant home with a one-out single to right in the ninth. Garrett Cleavinger delivered the game-ending pitch, which came after Bryant advanced from second to third on a leadoff groundout by Rizzo. Winning 4-3 after posting a 7-1 triumph earlier in the day, the Cubs set up a potential three-game sweep of the defending World Series champions.