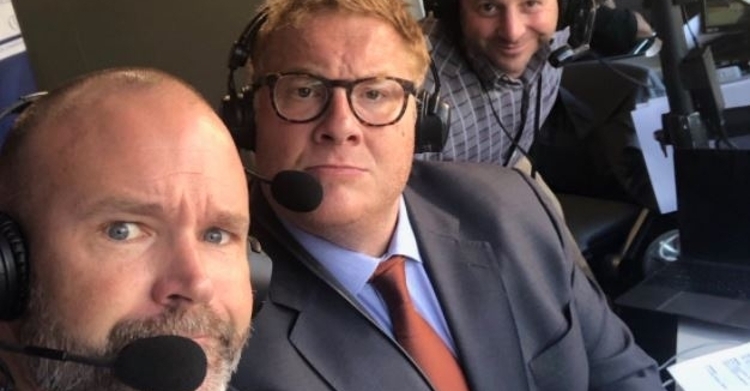 Boog has a close relationship with Rossy

CHICAGO – Marquee Sports Network today announced the hiring of Jon “Boog” Sciambi as the Chicago Cubs television play-by-play announcer. Sciambi has served in numerous roles with ESPN since joining the network fulltime in 2010, most prominently as the voice of ESPN Sunday Night Baseball for MLB on ESPN Radio, and as the regular play-by-play voice on Wednesday Night Baseball telecasts for ESPN since 2014.

During his time at ESPN, Sciambi has contributed to ESPN Radio’s MLB World Series coverage as an on-site studio host, while providing post-game, on-field interviews for ESPN’s SportsCenter. He also has held play-by-play duties for both the College and Little League World Series. His time at the network dates to 2005, when he began doing play-by-play for select college basketball and MLB games, and he has continued in play-by-play for both sports

during his tenure at ESPN. In addition to his play-by-play duties at Marquee, he will continue to serve as a multiplatform broadcaster for ESPN. Sciambi previously served as the lead play-by-play television announcer for the Atlanta Braves from 2007-2009 and as the radio voice of the Florida Marlins from 1997-2004.

“We are excited to welcome Boog to the Marquee Network and the Cubs organization. We’re confident he’ll add to the incredible legacy of Cubs broadcasters and quickly become a trusted friend to our amazing fans,” said Crane Kenney, Chicago Cubs President of Business Operations.

“There was no shortage of interest in this position, and deservedly so. It is one of the premier spots in sports broadcast history, and no one is more deserving of the seat than Jon. His personality, energy and baseball credibility make him the perfect choice to succeed the legends who have preceded him,” said Marquee Sports Network General Manager Mike McCarthy. “We welcome “Boog” to Marquee!”

“Having the opportunity to come to Wrigley Field and call games for the Chicago Cubs every day is surreal,” said Sciambi. “It really doesn’t get better than that. Chicago is one of the best cities and Wrigley is the best ballpark out there.”

“Jon’s deep baseball knowledge coupled with his dry humor and quick wit will no doubt bring Cubs fans a new level of entertainment as they watch Cubs games on Marquee beginning with the 2021 season,” noted Marquee Sports Network SVP of Programming & Production Mike Santini. “We are very fortunate to have him.”

New Marquee sports network Cub broadcaster @BoogSciambi Jon Sciambi will continue to work at ESPN as a multi platform announcer.He will be doing 130 plus Cub broadcasts.

Huge news for the first Monday of 2021. The best in the business and a shot of MORALE to start the year @DOM_Frederic @BoogSciambi https://t.co/oAzA6SAVsg

Welcome to the Chicago @BoogSciambi. Great addition to the @Cubs & @WatchMarquee ! Looking forward to working with you. ???? pic.twitter.com/grIRcnJm9c

The #Cubs and @WatchMarquee hit a home run with the hiring of @BoogSciambi to be their new TV voice. Great broadcaster and storyteller. Congrats.

Kris Bryant & Anthony Rizzo were mic'd up during spring training with @BoogSciambi!