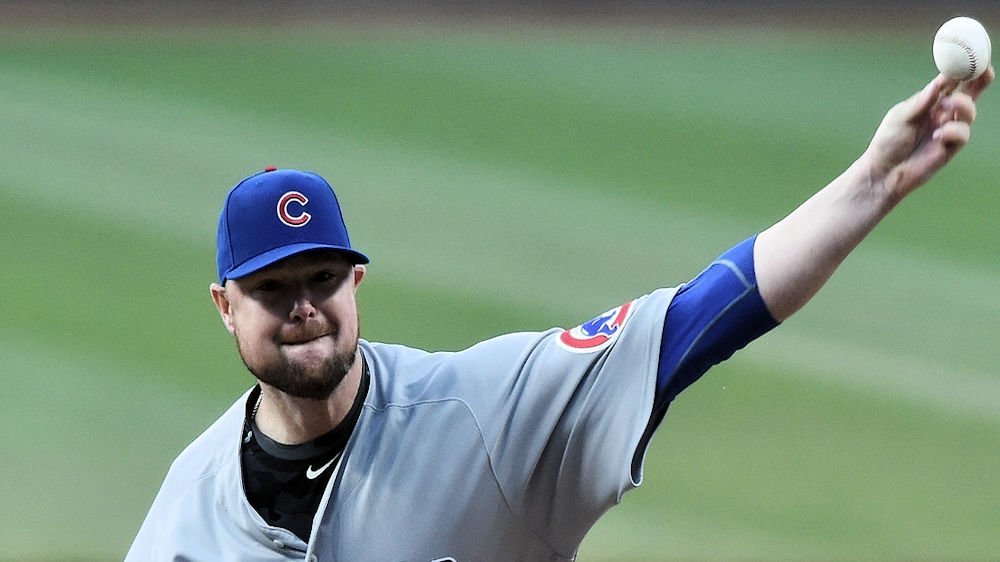 CLEVELAND — Chicago Cubs starting pitcher Jon Lester gave up just four hits in a loss to the Cleveland Indians on Wednesday. Unfortunately for the Cubs, three of those hits were home runs. The Tribe used three solo jacks to defeat the Cubs 4-1 and prevent the North Siders from picking up their first sweep of the season.

In a game of near-misses, the Cubs stranded several runners in scoring position and had several near-misses on foul balls that could have easily been home runs. The Indians, on the other hand, were far more fortunate, hitting a pair of home runs just inside of the foul pole and avoiding several disasters on the defensive front.

Trevor Bauer got the start on the mound for the Indians, and, while Bauer struck out eight and allowed just four hits in 6.2 innings of work, he struggled with his command off and on throughout his appearance. Catcher Yan Gomes frequently served as Bauer's savior, blocking erratic pitches and holding runners.

The Cubs also missed out on a few home-run chances, with Tommy La Stella and Jason Heyward both hitting towering shots just wide of the right-field foul pole. The foul poles were the Indians' friends on the night, however. Right fielder Brandon Guyer crushed a solo shot against Lester in the fifth that careened off the left-field foul pole.

An inning later, shortstop Francisco Lindor provided Cleveland with a 2-1 lead on a line-drive homer just inside the left-field foul pole.

Lindor's third home run of the season preceded Edwin Encarnacion's fifth round-tripper of the year by three at-bats, as the Indians designated hitter smacked a solo shot just over the wall in left-center with two outs in the sixth. Cleveland finished with just six hits and three walks as part of a four-run output, truly making the most of its three home runs.

As for the Cubs' offense, there was a glaring lack of power on a night after Chicago hit four homers. The Cubs squandered a couple of decent scoring chances prior to first baseman Anthony Rizzo finally putting them on the board in the fifth. With his third RBI of the series, Rizzo, who has been struggling with the bat to start the season, came up with a clutch two-out single to shallow right-center that scored left fielder Ian Happ.

That 1-0 lead quickly disappeared with Guyer's aforementioned dinger in the bottom half of the fifth. After garnering a 3-1 advantage, the Indians entered stalwart reliever Andrew Miller into the game with two outs in the seventh, but Miller exited fairly quickly, as he appeared to suffer a leg injury on an awkward pitch delivery in his first at-bat.

The Cubs, meanwhile, continued to struggle with converting hits into the runs. Catcher Willson Contreras hit his eighth double of the spring on a shot that bounced off the wall in center to begin the eighth frame. On the ensuing at-bat, Contreras advanced to third on a groundout, but, fitting with the theme of the game for Chicago, Contreras was left stranded. Two straight strikeouts, including an inning-ending one on behalf of shortstop Addison Russell, quelled the scoring chance for the Cubs.

Yet another instance of bad luck plagued Chicago in the bottom of the eighth. After Lindor earned a leadoff walk, Indians second baseman Jason Kipnis laid down a sacrifice bunt to move him to second. Kipnis was outed with ease, but Lindor strayed too far from second base after rounding it, causing Rizzo to fire to second from first. Unfortunately for Rizzo, his throw was far off the mark, and, with the ball sailing into the outfield, the speedy Lindor came in to score, benefiting from his base-running carelessness.

Cubs second baseman Javier Baez, who went 2-4 on the evening, was the lone Cub to experience a multi-hit game. With only five hits and three walks, Chicago simply did not come through at the plate, losing 4-1 and falling to 11-10 as a result. Lester took the loss for a decent seven-inning stint, dropping him to 2-1. As for Bauer, he was credited with the win to become 2-2 overall. Also for the Indians, who now stand at 13-9, closer Cody Allen collected his fifth save.